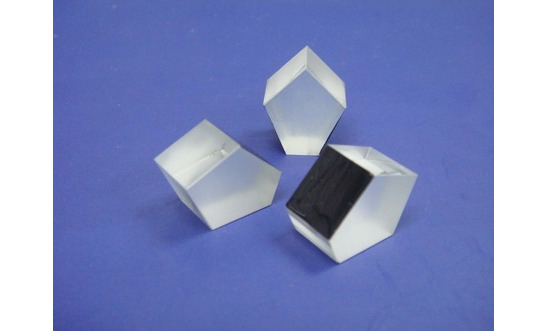 A pentaprism is a five-sided reflecting prism used to deviate a beam of light by a constant 90°, even if the entry beam is not at 90° to the prism. The beam reflects inside the prism twice allowing the transmission of an image through a right angle without inverting it (that is, without changing the image's handedness) as an ordinary right-angle prism or mirror would.

The reflections inside the prism are not caused by total insternal reflection, since the beams are incident at an angle less than the critical angle(the minimum angle for total internal reflection). Instead, the two faces are coated to provide mirror surfaces. The two opposite transmitting faces are often coated with an antireflection coating to reduce spurious reflections. The fifth face of the prism is not used optically but truncates what would otherwise be an awkward angle joining the two mirrored faces.