Previously, we discussed how visible light in combination with implantable optical sensors was used to map epileptic neural activity and localize focal seizures on the surface of the brain.  Scientists at Weill Cornell Medical college illuminated the surface of the cortex with LED light guided by fiber optics and captured the reflected signal using a CCD camera.  While they were able to demonstrate high resolution imaging of blood flow associated with epileptic seizures, the technique (called Optical Recording of Intrinsic Signal, or ORIS) required the animal or patient to remain stationary with the cortex surgically exposed.  In this article, we will introduce research by scientists developing implantable optical sensors capable of performing ORIS measurements.

The Need for Implantable Optical Sensors for Epilepsy

According to the World Health Organization, nearly 50 million people worldwide suffer from epilepsy.  Their symptoms typically consist of random, unprovoked seizures which are caused by a failure of neurons in the brain to inhibit their own activity.  The neurons enter what can be described as a positive feedback loop with neural activity spiking at random or sustaining periods of uncontrolled excitation.  In cases of focal epileptic seizures, the epileptic behavior originates at a specific region of cortical brain tissue (called the focus) which then spreads to surrounding tissue.

While anti-epileptic drugs (AEDs) are successful in treating or completely removing epilepsy symptoms for 70% of all epilepsy patients, the remaining 30% of patients who do not respond to AEDs have few alternatives in treating their epilepsy.  One of the few recourses is highly invasive neurosurgery with a typical surgical treatment targeting the removal or disconnection of the epileptic focus.  In order for surgeons to identify the location of the epileptic focus, the patient’s neural activity must be mapped for a long period of time, during which normal conscious activity and seizures occur.  By monitoring the differences in neural activity that arise from seizures, they are able to formulate a surgical treatment plan. 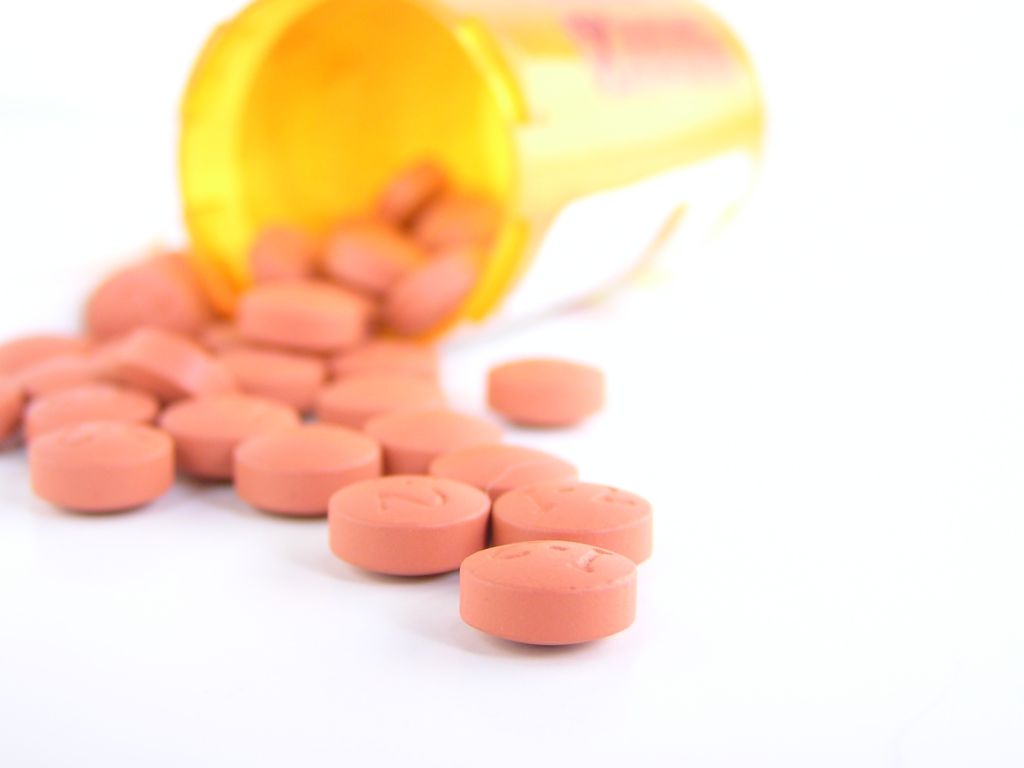 Epilepsy patients who are unresponsive to anti-epilepsy drugs may require invasive surgery and would benefit from improved neural imaging from implantable optical sensors.

The current method for mapping seizure activity in the brain for epilepsy surgery candidates involves implanted electrocorticography (ECoG) electrode arrays.  Typically, a surgeon will remove the top part of the skull, exposing the cerebral cortex.  The ECoG array is then placed in contact with the cortex and the skull is replaced over the ECoG array with wiring being fed out through the skull to a recording station/cart.  The patient will then be free to resume conscious, ambulatory activity within the hospital while the ECoG array measures neural activity.

The ECoG array is remarkable for it’s ability to be implanted and operated for long periods of time and remains the benchmark in localizing seizure activity over long periods of time; however, it is severely hampered by low spatial resolutions (on the order of 1 cm x 1 cm detection) and poor signal to noise ratio.  Resective surgical treatments for severe epilepsy cases tend to have low success rates, in part due to this high level of uncertainty in mapping the neural activity.  Hence, there is reason to believe that improved neural sensing hardware can lead to more successful surgical treatments in addition to a better understanding of seizure dynamics. 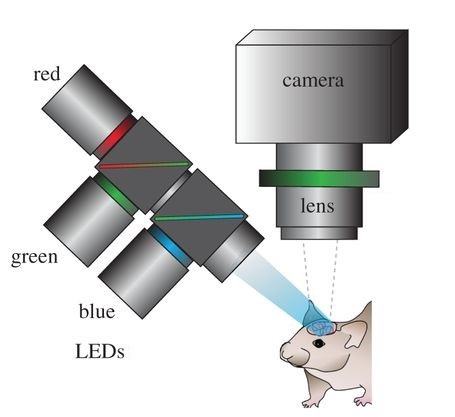 Optical recording of intrinsic signals is used to create high resolution maps of blood flow in the brain allowing for the accurate detection of seizures. Image by Ma, et al.

In ORIS, visible wavelength light is reflected off of the cortex and recorded by a detector which maps blood flow across the surface of the brain.  The technique is akin to pulse-oximetry, which is how a Fitbit or Apple Watch monitors heart rate.  With a smartwatch, an LED emitter and photodetector mounted on the wrist is used to monitor changes in reflectivity by the skin due to blood flow.  As more blood fills the blood vessels in the brain or wrist, hemoglobin in the blood absorbs the light, reducing the amount of light which is reflected back towards the detector.

By mapping blood flow with ORIS, scientists have demonstrated a high resolution detection of seizures in rats and humans using a conventional mounted camera system. With this method they have achieved resolutions of up to 100 µm x 100 µm, effectively reaching the detection limits of CMOS/CCD cameras.  Despite the impressive imaging capabilities of ORIS, long term recording capabilities using an implantable device comparable to ECoG have not been possible until recently.

In 2010, a team of scientists from Columbia University and Cornell Weill Medical College published results from prototype implantable optical sensors capable of detecting seizures using ORIS.  The device consisted of a light emitting diode (LED) and a photodetector mounted on a flexible circuit.  The LED and photodetector were commercially available surface mounted devices soldered onto a gold circuit fabricated on a polyethylene napthalate (PEN) substrate. The devices were encapsulated by a layer of parylene-c and epoxy to provide a biocompatible barrier between the components and the surface of the brain. 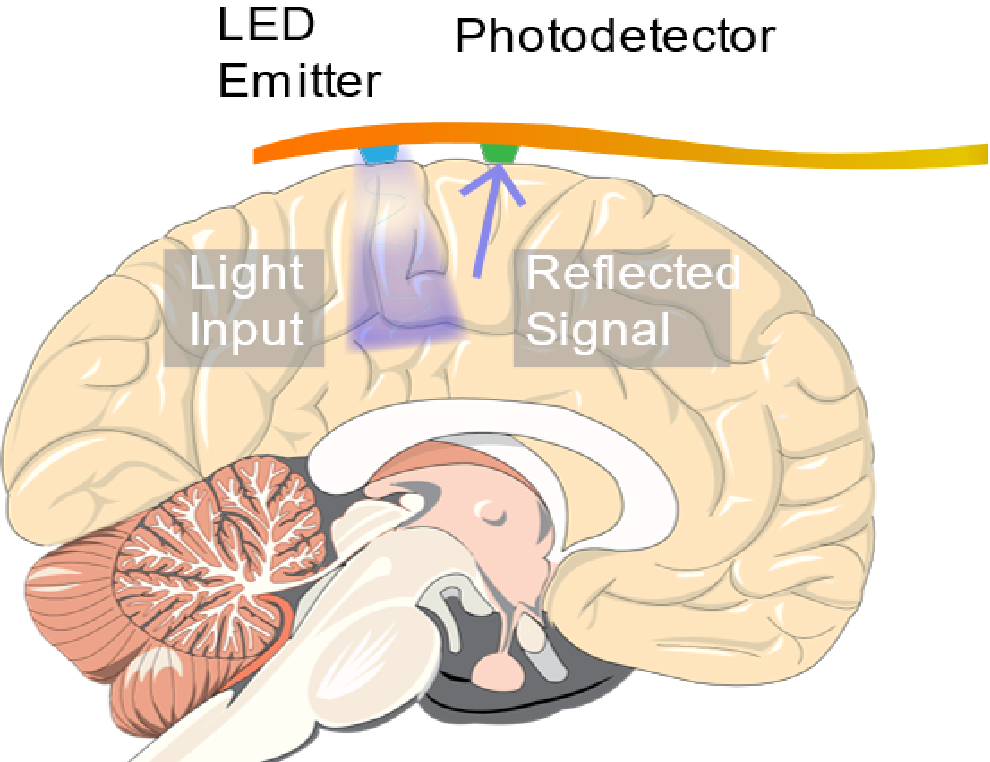 An implantable ORIS sensor consisting of an LED and photodetector mounted on a flexible circuit was used to detect seizures occurring in live mice.

The device was tested on live rats that were sedated and injected with a 4-aminopyridine to simulate epileptic seizures.  When placed on the cortex of a rat, the LED illuminated the brain while the response from the photodiode was recorded on a computer.  The device was able to record changes in the reflected light caused by cerebral blood flow.  From that signal, the scientists extracted the heartbeat, respiration rate, and slow oscillations from healthy neural activity by the rat.  After seizures were instigated, drastic changes in the cerebral blood flow were detected for each seizure that occurred during the experiment.  An electrode implanted near the device was used to confirm the accuracy of the device.

The work done by the group at Columbia University and Cornell University marks one of the first measurement of seizures using ORIS techniques with an implantable optical sensor device.  Their demonstrated signal to noise ratio of 42 dB while detecting seizures is significantly higher than conventional ORIS techniques which use mounted cameras.  This early demonstration of an implantable ORIS sensor is remarkable not only for it’s sensitivity to seizure activity, but also for its simplicity in design and fabrication methods.  The devices can be assembled using run-of-the-mill electronics manufacturing techniques and don’t require any exotic materials.  The flexibility of the design and device composition may be crucial towards any clinical or mainstream success of the medical device.

Although the work discussed represents a major proof of concept for performing ORIS measurements using implantable optical sensors, the design of the device itself remains impractical for clinical use in performing high resolution mapping of the human brain.  The individual LED and photodetectors used in this work were too large and bulky to densely pack into an arrayed sensor.   Additionally, the size and thickness of the package places a limit on the flexibility of the device.  In a future article, we will discuss recent iterations and modifications of this design which have further opened up the way for neural mapping of seizures that outperforms the current standard set by ECoG. Stay tuned!

To read more about the implantable ORIS device, click here.