In 1842, Johann Doppler delivered his paper on Doppler effect to Royal Bohemian Society. In his paper “On the Colored Light of Double Stars and Some Other Heavenly Bodies”, he arrived at the form of light emission by moving bodies. Years later the effect was coined by his name and used to detect the motion of far away bodies in the universe. It is interesting to note that, similar to detecting movement in far away macroscopic bodies, this method can also be used to detect in microscopic bodies. This method, which is often used to measure liquid flows in capillary channels is called Laser Doppler Flowmetry.

Doppler Flowmetry has wide applications in medicine in terms of measuring blood flow in blood vessels. In particular, blood flow in the eye, heart, kidney, bone, muscle and skin have successfully been measured with the Doppler method. Depending on the characteristics of the measured region, the output signal is processed differently, although the general setup can be quite similar.

In this blog post we will discuss the method and the setup of Laser Doppler Flowmetry, with its applications in imaging blood flow in retina, heart and skin. 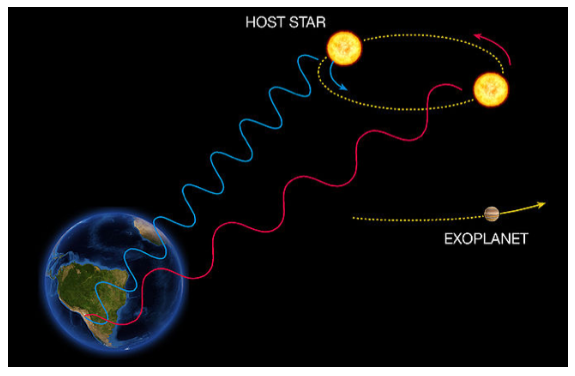 Doppler effect showing the red-shit and blue-shift of a moving star.

The shifted spectra is compared with the known emission profile of starts to measure the shift.

Laser Doppler Flowmetry (LDF) uses the Doppler effect to measure the speed of red blood cells. Here the incident light in the red wavelength is incident upon the blood vessels. The red blood cells absorb the incident light and reflect light with a shifted frequency depending on the flow velocity. Optical fibers can be used for this purpose to control the delivery of light. Two fibers are typically used with the detected light collected in a different fiber. The image below shows the schematic of collecting light in Laser Doppler Flowmetry. 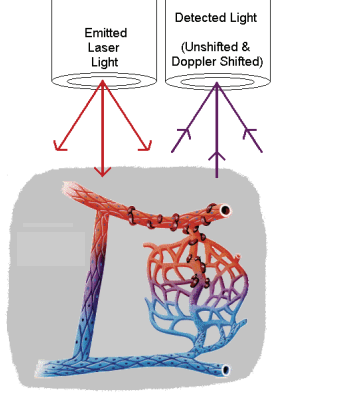 Excitation and detection of blood vessels with laser light for flowmetry. Courtesy  biopac.

The light wavelength can be changed within a narrow window to control the depth of penetration depending on the regions of the body. For example, different wavelengths penetrate at different depths in skin. Optimal wavelength choice is required if one wants to image surface or deep tissue blood flow.

The detected light is cross correlated with the input signal to obtain a power spectrum. The wider this profile, the wider the velocity distribution in the vessel.

During cardiac surgery, it is necessary to make sure there is a constant blood flow to the heart. Since the measurement is direct here, a fiber optic cable can be held close to the blood vessel to detect the reflected light. This has been used in invasive transmyocardial surgery to measure the perfusion of blood while making small incisions in the heart. The image below shows laser Doppler flow measurements during a cardiac surgery. 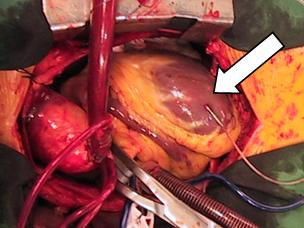 Retinal blood flow can still be imaged with visible light as the eye is transparent to the visible region. The objective is to measure retinal blood flow. Optical fibers are not necessary here, instead a lens setup is employed as shown below. 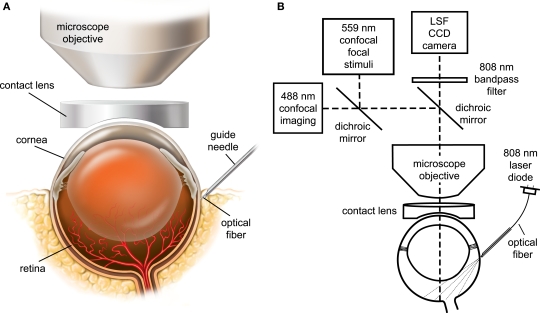 This is used in diabetic retinopathy surgery where the retinal blood vessels suffer from leaking blood into the surrounding areas. The surgery involves clotting the ends of blood vessels to stop the bleeding. Doppler flowmetry  technique can be used to check the flow in the back of the eye to make sure the clotting process has occurred properly. Apart from being useful in heart and eye surgery to monitor blood flow, it can also be used to monitor blood flow in bone, kidney, and brain surgeries similar to the methods above.

Skin flowmetry is different in imaging characteristics as the blood vessels are not directly exposed for measurement. While this contributes to some noise in the measurements, choosing the right wavelength can solve this problem. Moreover, it can be used to vary measurements for surface and deep tissue blood flow.  Handheld measurements method using a smartphone with integrated laser diodes have been proposed to image blood flow in hand as in the below setup. 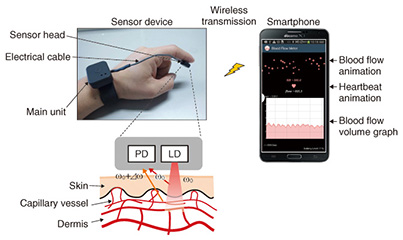 Additional measurements from the same setup can also be made from the reflected signal using digital electronic processing techniques. From the intensity, the concentration of the blood in different regions can be detected. The various quantities imaged is shown below for a hand. 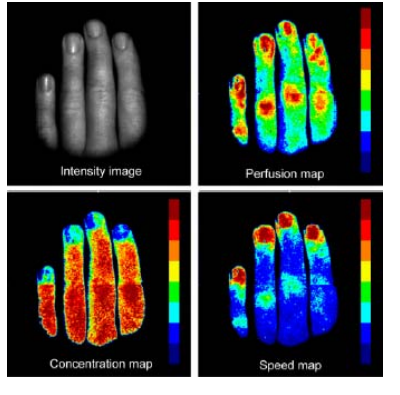 Check out FindLight’s collection of devices for laser diodes, fiber optics, and imaging systems that can be used in Doppler Flowmetry.