Medical Lasers: A Guide to Various Effects and Choices

The first medical application of lasers was reported by Goldman in 1962. In cardiovascular surgery, McGuff first used a Ruby laser in 1963 for the experimental ablation of atherosclerotic plaques. After a long time of investigations and new developments in laser technology first clinical applications were performed by Choy and Ginsburg in 1983. Since then many solid state lasers and gas lasers have been used in many fields of medicine ranging from opthalmology, dentistry, cardiology, cosmetic purposes, and even surgery. New effects and efficient ways of laser delivery have been improved over the decades, with new applications coming forth every year.

The most common use of lasers in medicine is to induce thermal, photochemical, and photoablative effects. This article will provide a bird’s eye view of the various biological processes that lasers are commonly used for, with the various laser characteristics one must consider while choosing a laser for application. Detailed discussion of each process in different fields is done in other FindLight blog articles. The main aim is the bring together, compare and contrast the commonly used lasers in medicine. 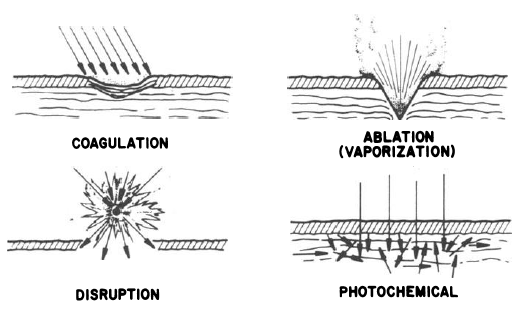 For imaging tissues, lower energies must be used. This is because the tissues must not be destroyed and no biological processes are intended. Lasers in the ultraviolet range can be used for fluorescence spectroscopy of certain tissues. Using lasers in the optical range instead can be used to image neural activity. Hyperspectral imaging is another technique that uses many wavelengths to gain multispectral data about tissue. This method has been used to optical multispectral images of skin tissue. Energies do not exceed mW, and usually operated in continuous mode.

Heating tissues can be used to bring about photocoagulation. In this process, biological molecules such as proteins and enzymes are heated above 50 C but below 100 C. This results in denaturing and coagulation. The factors to consider in this application is the rate at which energy is transferred, and the thermal conductivity of surrounding tissue so that the area of effect is contained. Using the lasers in pulsed mode with a proper choice of energy can control the spread of laser delivered energy to the surrounding tissue. Nd:YAG and CO2 lasers are commonly used for this purpose.

Cutting tissues is a photoablation process in which the tissues are heated to temperatures above 100 C. Photoablation is used to create incisions in tissues. Certain biological molecules are vaporized, with water turned into water vapor. Thus fume extractors are used to remove the vaporized tissue volume. Pulsed lasers are most common for this purpose, as it is necessary to keep the incision precise. It also controls the energy dissipated to the surrounding tissue. Pulsed excimer lasers in opthalmology is a commercial example for this process.

Photodynamic therapy is different from the above methods in that the laser energy is not the crucial driving factor. Instead, the application is wavelength selective. Photochemicals can emit free radicals for certain incident laser wavelengths, triggering cell death. Check out FindLight’s article on Photodynamic therapy for more details on this process.

Table of biological effects triggered by various processes, and their use in medicine. [2]

Laser energy and wavelength are the most important characteristics influencing the choice of laser. Additionally, choosing the pulse width for operation is necessary to control the laser induced tissue damage. Beam quality must also be monitored to make sure the beam does not cause non-uniform effects.

Solid state and gas lasers are the most common medical lasers as the can deliver higher energies than diode lasers for thermal and tissue ablation. CO2 and Nd:YAG have a high tunability which have made them common in medical applications.

Diode lasers are not the most common form of lasers used as they give powers on the order of mW. However, recently they have become popular in the field of photodynamic therapy, where the wavelength is more crucial for usage. Diode lasers within the visible region are used for this purpose. Lasers in the infrared region can still be used with the energy tuned accordingly for heating applications, rather than tissue ablation. The table below sums the various uses of diode lasers in medicine. 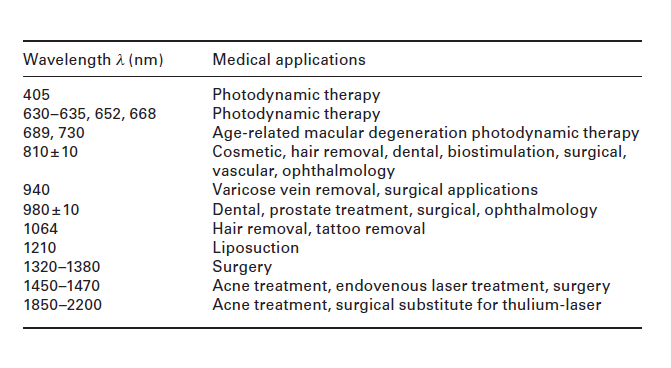 Applications of diode lasers in medicine. Courtesy of AAPM report.

Medical lasers often come with delivery cables to control the area of application. There are two types of medical beam delivery: fixed beam delivery with CO2 being the most common for this use, and fiber optic cable delivery such as in a Nd:YAG system. A fixed beam laser can be used in highly localized applications as in certain ophthalmic lasers. 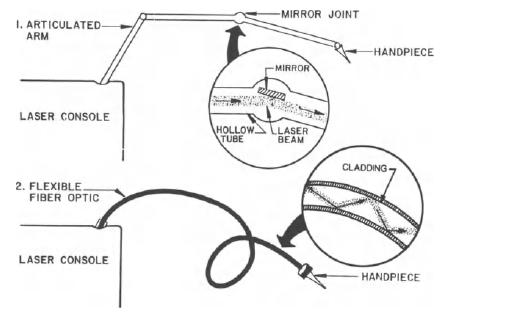 The choice of wavelength for operation depending on the content of the affected tissue. Melanin, haemoglobin, and water are the common molecules that absorb laser energy. Medical lasers are usually chosen to target these molecules depending on the application. The table below lists some of the lasers used for various applications, with the molecule that absorbs the laser energy. 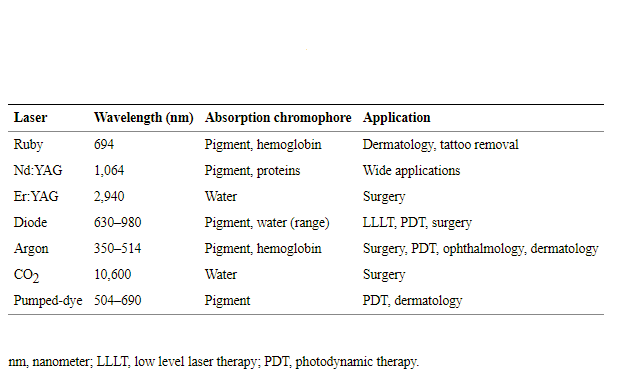 Medical lasers that are commonly used along with their targeted absorption molecules. Courtesy of NCBI.

Check out FindLight’s blog for specific medical applications of lasers. To use solid state and gas lasers for your designs, FindLight provides a catalog of many of these lasers.