What is Urban Farming?

Historically, farming developed in rural areas with plentiful amounts of land and resources; however, recently urban farming is on the rise. Urban farming is when cities produce agriculture, with examples being on rooftops or vertically growing indoors. It can extend from small gardens in window sills to large developments spanning an entire roof. Along with being aesthetically pleasing, urban farming also combats food deserts, decreases the carbon footprint, and creates jobs. Urban farming also uses resources more sustainably. Oftentimes vertical systems use no soil, and therefore get no weeds. Water is recycled throughout the system, with savings reaching up to 90%. The harvest time decreases since the plants grow in an optimal environment with controllable factors, such as light, temperature, and nutrients.

Currently, 50% of the world’s population live in urban areas, with the United Nations predicting that number to increase to 70% by 2050. This makes the development of urban farming a necessity to create sustainable food sources, while also making food more local and therefore decreasing the carbon footprint. Crowding in cities leads to limited space and resources, so urban farming requires fine-tuned operations to allow for optimal utilization of the environment. Sensors that record temperature, humidity, and carbon dioxide levels are often used for this purpose. Plants that grow in rural, open areas are subject to fluctuating weather, temperature, and pests. The controlled system of urban farms, in contrast, can combat this. Sensors can record factors that impact plant growth, which  a smart system can then use to control the environment based on the reading of the sensors.

Arduinos and Raspberry Pis are useful to track the climate of these enclosed food systems. A specific vertical farm, the robotic vertical farm system (RUFS), utilizes these microcontrollers to control the water levels, temperature, lighting, air circulation, and pH of the water. RUFS connects to an app, and there are alerts such as when the water needs to be refilled or when temperature needs to be adjusted. Not only does this project increase plant growth in urban areas, but also the water cycles throughout the vertical farm, which leads to a savings of up to 90%.

Specifically indoor farming or areas of intense shade require grow lights. There are multiple options, but LEDs are the most popular. LEDs are an energy efficient light source, and they can actually be better than sunlight for growing plants. This is due to the control of the LEDs. Blue-red LEDs are best for using as grow lights since chlorophyll best absorb this purple wavelength. The sun can also be harmful heat wise for plants, while LEDs do not significantly impact the temperature of the plant. Using microcontrollers such as an Arduino can further increase the efficacy of the LEDs. Data can be recorded and analyzed from these lights, and therefore plants can be grown in the environment that is most beneficial.

Carbon dioxide sensors are also necessary for these urban farms. The photosynthesis cycle requires carbon dioxide to function. Photosynthesis is how the plant fuels itself and grows, making the level of carbon dioxide an indicator of how well the plant grows. In nondispersive infrared CO2 sensors (NDIR), infrared light is passed through air to an infrared detector. This detector measures the amount of CO2 present in the urban farming garden box. These sensors can again connect to a microcontroller, allowing an automated set up.

Diagram of how an NDIR Carbon Dioxide Sensor works, these are one of the sensors common in Urban Farming systems. Courtesy of co2meter

Sensors and microcontrollers can not only record data, but also analyze it. After several harvests, the optimal levels of CO2, light intensity, water, etc can be found. This will eventually lead to a more energy and resource efficient farming system.

Urban Farms Around the World

Nature Urbaine is a 14,000 m^2 rooftop urban garden system in Paris. It is the largest rooftop system in the world. Nature Urbaine gives a demonstration of what resilient cities can look like in the future, with produce grown sustainably, locally, and able to support the surrounding population. Plants like strawberries, lettuce, herbs, and eggplants are growing here. The goal is to produce 2,000 pounds of plants yearly, and to give to local Parisians and restaurants. Similar to the RUFS, water cycles constantly through the root system, with the cycle lasting 12 minutes. The process is automated and connected to the Internet of Things.

Singapore is one of the leading countries in urban farming, due to the density of buildings and limited land space. The country has dedicated itself to producing 30% of their own food by 2030, with urban farming being a main component of this goal. Commonwealth Greens is another recently built urban farm. This vertical farming system contains 3,100 pillars, with hydroponics used to cultivate the greens. Cropton is the name of the smart system that optimizes the environment, and like Nature Urbaine, connects the pillars to the IoT and sensors. So far this farm has been a success, with grapes beginning to grow in 10 months, compared to the usual 3 years.

Hydroponics is a concept that has been developing in Singapore, and a smart aquaponics system was introduced at the World Engineers Summit. Aquaponics utilizes the concepts of hydroponics, while also introducing fish to further fertilize the plants and keep the system healthy. This smart farm utilized blue and red LEDs as grow lights, a water heater to create the optimal temperature, and a data acquisition system to monitor data coming in from all sensors. Further reading on LEDs can be found here. 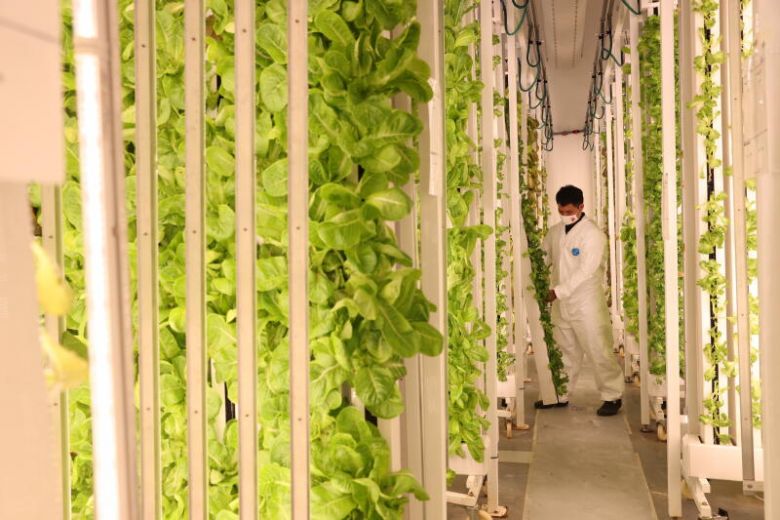 Vertical Farming System at Commonwealth Greens in Singapore. There are 3,100 of these pillars. Photo courtesy of The Straits Times

Plenty is a San Francisco based vertical farming organization. They use LED lights, infrared cameras, sensors, and machine learning algorithms to analyze the data to create the most efficient environment for the greens. There are no pesticides or GMOs involved. Plenty advertises that they can fit a 1500 acre farm into the size of a grocery store, all while being 350 times more efficient.

Urban farming has a future in technology. With complex algorithms and cameras to track plant growth, the way produce grows may entirely change within 25 years. No more soil, copious amounts of water, land, and pesticides will be used. Instead of hands digging into dirt, it will be the robotic arms picking the herbs from a 20 foot tall pillar.