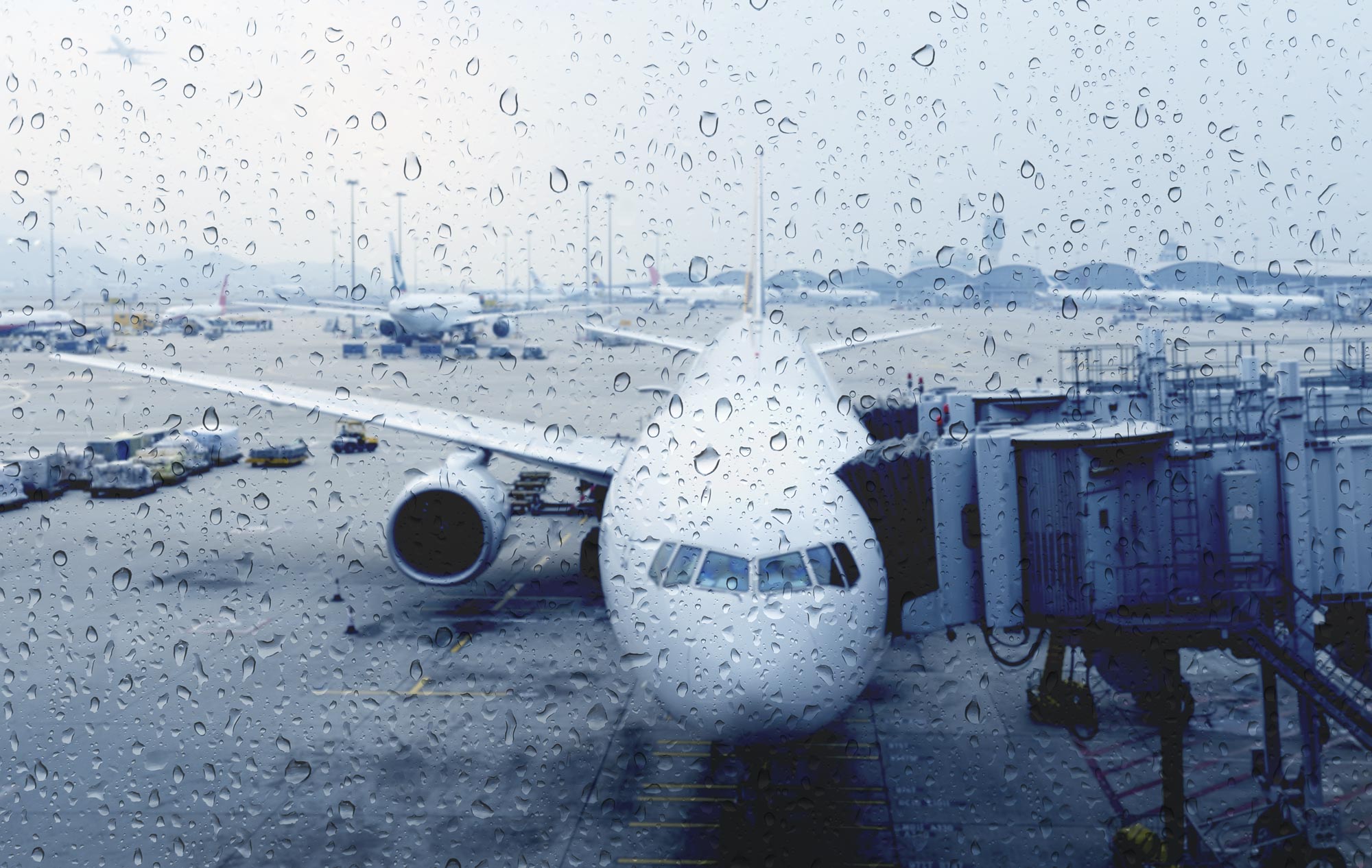 Wind and rainfall must be closely monitored in many domains including agricultural planning, flight safety, and early warnings of hazardous weather. Wind and rain detection is also important for long-term research such as studies of climate change and prediction models of future changes. There are several well-established methods for detection, but performance degrades in harsh conditions.

The two most common wind and rainfall detection techniques are RADAR and LiDAR. Radio Detection and Ranging (RADAR) was originally developed during WWII to detect ships and aircrafts in low-visibility. Radar weather systems transmit a high frequency radio signal into the atmosphere where the radiation will interact with conductive particles. The wavelength of the signal is considerably larger than the particles it will encounter in order to induce Rayleigh scattering. A considerable amount of the energy will therefore reflect back toward the radar receiver to provide reliable, accurate information about the size and motion of the particles of interest. Radar pulses, however, spread out as they travel away from the transmitter. This drastically reduces resolution of the received signal. 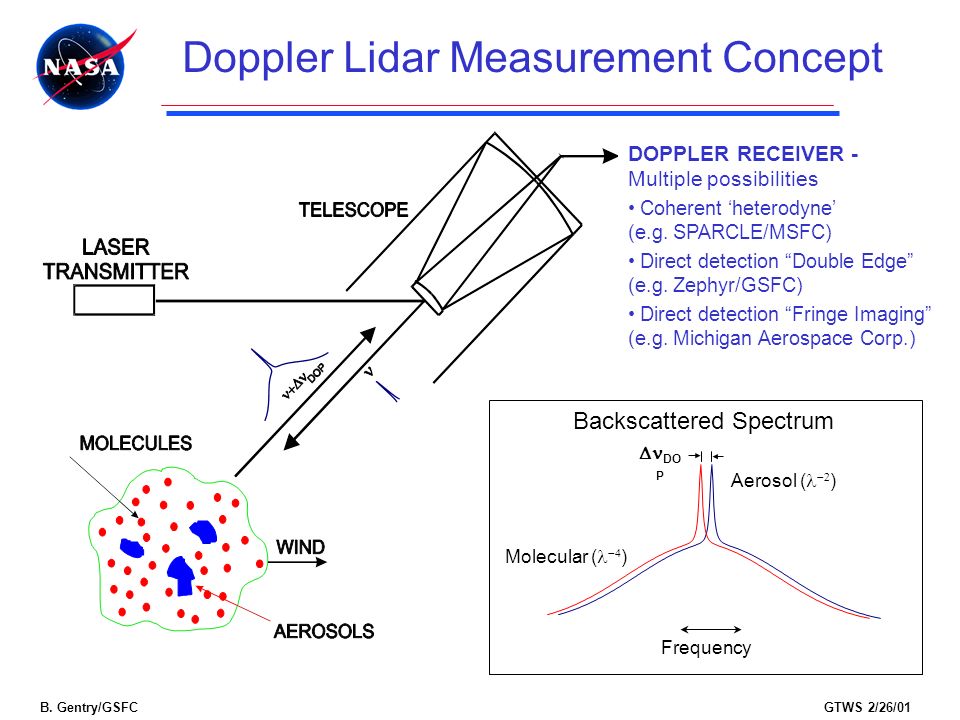 The above graphic shows the basics of Doppler Wind Lidar. Courtesy of NASA.

Light Detection and Ranging (LiDAR) setups are very similar but the signal is comprised of laser light instead of radio waves. Light transmits from a source through a series of optics before a beam expander sends the collimated beam into the atmosphere. Reflected photons return to the receiver, a telescope, where an optical analyzer amplifies and converts the signal to be digitized.

The frequency of the transmitted signal experiences a Doppler shift due to Earth’s rotation, spacecraft motion, and wind velocity. Doppler Wind Lidar (DWL) uses the shifted signal to measure wind projection along the laser’s line of sight. DWL typically provides high temporal and spatial resolution, but its performance suffers when monitoring wind and rainfall at the same time. In rainy conditions, the backscattered signal is significantly attenuated by interference from raindrop reflections. Raindrops on the telescope’s lens can also create wavefront distortion.

The Need for a New Doppler LiDAR System

Rainy conditions produce two peaks on a Doppler spectrum, representing backscatter from raindrops as well as aerosols. High temporal resolution renders CDL much more suitable for these measurements than direct detection. A collaborative research team at four institutions spanning Western China present their compact CDL in an October issue of Optics Express. The lidar system is capable of simultaneously monitoring wind and rainfall without compromising resolution.

The team’s first experiment compares the performance of their Lidar system with that of a radiosonde in sunny conditions. Radiosondes are carried into the atmosphere via a weather balloon where a radar detection system measures the wind speed and direction. It then sends the radio signal back to ground where it can be analyzed.

Horizontal wind and direction profiles from the Doppler LiDAR and radiosonde. Courtesy of Optics Express.

The Lidar system operated in Doppler beam-swinging (DBS) scanning mode with three pointing directions: vertical, 60 degrees north, and 60 degrees west. The researchers use three radial wind profiles to calculate horizontal wind speed and direction, thus validating their system’s continuous and real-time observation. The Lidar and radiosonde show consistent measurements at high altitudes and some variation at low altitudes likely due to inhomogeneity of the wind field. Wind speed and direction are measured with a mean difference of .3 m/s and 1.1 degree, respectively.

A second experiment tests their system in rainy conditions. The researchers combined coherent Doppler Lidar with a velocity-azimuth display (VAD) scanning technique. VAD collects conical scans to measure the mean Doppler velocity as a function of the azimuth angle. This technique enables the system to measure wind and rain simultaneously because the measurements can be broken up into horizontal and vertical components.

The above shows a comparison of the signal power spectra on a sunny day (left) and rainy day (right). Courtesy of Optics Express

The total signal-to-noise ratio represents aerosol concentration and determines the accuracy of the system’s velocity estimates. Rainfall scavenges much of the aerosol particles, so the ratio sharply decreases when it begins to rain. The researchers define the velocity vector and unit vector of the Lidar direction such that the line-of-sight velocity is a cosine function of the azimuth angle. Consequently, it is more difficult to separate wind and rain spectra when rain is light because it has a small vertical speed. Light rainfall can get easily move along with the wind, resulting in a small difference in horizontal speeds.

To analyze the two-peak spectra, the researchers first perform a Gaussian fit on the peaks. They make the assumption that rain signal will exhibit a large Doppler shift in heavy rain due to its vertical speed; the peak on the right can therefore identified as the rain peak. Alternatively, light rain conditions bring the aerosol and rain peaks much closer together. In this case a large distribution of raindrops broadens the rain spectrum while aerosol broadening is negligible, so the wider peak is the rain signal. 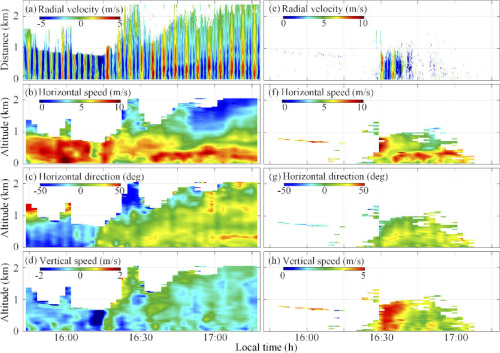 The results show separated measurements for the vertical and horizontal components of the wind and rain signals in rainy conditions. The research team compared radial wind velocity measurements based on one-peak and two-peak spectra to estimate the influence of the rainfall. They calculated a difference in line-of-sight speed to be a significant 2 m/s, confirming that the two-peak fit reduces the error in wind detection.

Moving forward, the researchers say they would like to compare their Coherent Doppler Lidar results with standard radar. They also plan on enlisting additional lidar techniques (i.e. depolarization Lidar, Raman Lidar, and Mie Lidar) to expand their study to different precipitation types like hail and snow. Their work could dramatically improve weather forecasting and climate modeling. This would play a fundamental role in public safety, especially in hazardous conditions.

For more information about the principle and design of the coherent Doppler LiDAR system, find their paper here.