Laser Micromachining: A Torch Light To The Microscopic World 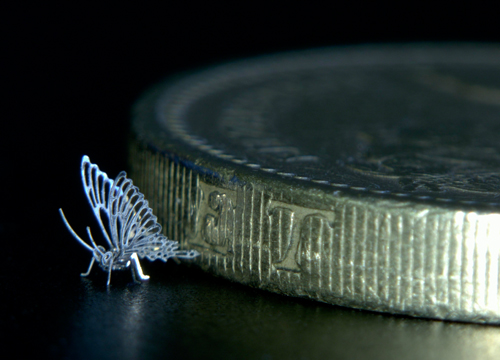 Miniature insect manufactured from Tantalum via laser micromachining, next to £1 coin. Courtesy of Micronanics and CLF Target Fabrication Group

What Is Laser Micromachining?

In recent years, the growing maturity of laser devices has conceived and fulfilled many novel material processing techniques. Among all the branches, laser micromachining represents the pioneering efforts to create small and delicate features via laser-achieved material removal and modification. Plain as this conjecture might seem, laser micromachining has made possible applications beyond our wildest imagination. It continues to bring profound influences to industries such as electronics, medicine, and defense.

Why Use Laser For Micromachining?

Before discussing the intriguing applications, one pragmatic question arising in people’s mind is why lasers are favored for fabricating small structures. The reason is threefold. First, lasers boast non-contact characteristics, thus, the mechanical damage to the parts being processed can be significantly avoided. Second, laser micromachining is a convenient, one-step process. Unlike etching and conventional mechanical approaches that involve multiple reaction stages and changing of molds, laser micromachining greatly diminishes operation complexity, and hence can potentially save time budget. Finally, lasers provide a very flexible tool since advanced systems incorporate computer control with programming interfaces that permit “soft tooling”. This is especially valuable for prototyping where high tool-up costs must be avoided. Thus, by adopting lasers, it is possible to complement and to some extents supplement the conventional micromachining methods.

Laser micromachining technologies have enormously enriched our measures to manipulate microscopic structures and processes, and the related applications are numerous. However, it is impossible to cover them all within one single article, and here we only discuss the major ones in three different industries.

Microvias are a series of small holes with a diameter of 50–200μm drilled in printed circuit boards. They serve as the interconnects between multiple layers in high density interconnect substrates and play a vital role in achieving high-quality input/output (I/O) performance. Generally, high density microvia arrangements allow for circuits with greater precision and more design options. Hence, they are specially emphasized in the electronics industry. Today, manufacturers have implemented laser micromachining for microvias drilling in numerous production lines. They typically use a 355 nm ultraviolet laser and CO2 lasers to fabricate desired structures.  Once system parameters (material thickness, laser power etc.) are properly tuned, thousands of holes can be drilled per second. This technique has benefited the industry with speed, smaller hole size, cleanliness, hole placement accuracy, and cost-to-performance ratio.

When executing circuit designs, one prominent difficulty is to guarantee that the components are working at very specific values. In this situation, laser micromachining can be integrated into a trimming system to adjust the parameters of the circuit. By ablating away small portions of a resistor with a laser beam,  the resistance values can be dynamically changed while the circuit is being simultaneously tested. Once reaching the nominal values, the laser ablation will automatically stop. Usually, a trimming system consists of a laser with high beam quality and small beam diameter (20–40 μm), an industrial PC with control software, a galvanometer beam delivery system, instruments to measure the circuit parameters, and an X–Y table. Capacitors can also be trimmed in a similar way, and this technique significantly improved the performance of electronic circuits.

Stents are small artificial tubes injected into a body for a blood vessel surgery called angioplasty. They are usually inserted into a blood vessel, expanded by an inflated balloon, and hence counteract the restriction of blood flow. Laser micromachining has been proved to be an effective tool to fabricate stents. Early angioplasty utilized metal stents, which were mainly marked by near infrared lasers. However, this method was criticized for potential complexity, because if relapse occurs, a surgical procedure is required to remove the non-dissolvable stents. In recent years, bio-absorbable stents have been developed to solve this problem. Due to their heat sensitivity and delicate structures, ultrashort pulse laser micromachining technique is the only suitable approach to make bio-absorbable stents. The edge quality and cleanliness of stents are also enormously improved, giving rise to in better therapeutic results. 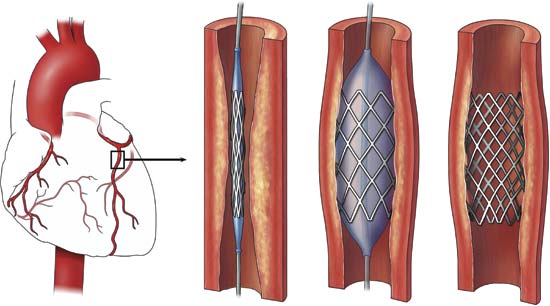 Insertion of a stent into a coronary artery. Courtesy of Encyclopedia Britannica.

Traditional diabetes tests are usually performed by gold-coated polymer strips, on which blood reacts with enzyme and provide readings of glucose levels. Today, laser micromachining has enable a scenario to obtain glucose reading without pricking body for blood. This new test device involves a ferrite material that is difficult to pattern by other methods as microcracks and heating can jeopardize device functions. By machining a ferrite material with an infrared or an ultraviolet laser, researchers can make implantable devices that can send radio signals to a receiver. These signals can be translated into blood glucose levels. Readings can not only be collected as often as desired, but also be stored and shared with a physician conveniently. Most importantly, no blood will be shed for a simple test, and the placement of the device in a patient’s body takes only a few minutes. This technique is still under development, but it is predictable that its commercialization will benefit thousands of diabetes patients.

Modern jet engines have thousands of small holes drilled into various components such as turbine blades, nozzle guide vanes, combustion chambers, and afterburners. Air flow interacting with these holes forms a cooling layer that blankets the components. This effect can extend the components’ lifetime, reduces maintenance, and achieves superior performance features. Traditional hole drilling techniques such as electrode discharge machining (EDM) suffer from several drawbacks including need of liquid coolants, consumption of electrodes, and the biggest one—the heat-insulating coating of zirconia ceramic which can not be processed by EDM. Nowadays, laser micromachining techniques based on near infrared lasers, Nd:YAG and fiber lasers can easily drill holes on engine components with required quality and speed.

Furthermore, turbine airfoils are very expensive to manufacture; they become damaged in use quite often, and demand maintenance frequently. During refurbishment processes, it is important to remove all the outer coating layers without hurting the underlying metals and alloys. This requirement turned out to be extremely difficult for mechanical methods. Currently, people use a series of chemicals to achieve the gentle touch, but still this process involve noxious waste and multiple complicated procedures. However, with advanced laser micromachining techniques, airfoil refurbishment can be tremendously simplified. The removal of old coating can easily be accomplished by tuning laser power and processing time. Moreover, the processed regions turn out quite smooth and clean, making them convenient for subsequent recoating. These advantages become more prominent when the airfoils has sophisticated surface shapes.

How practical do you think it would be to apply this to nanotechnology and the use of robotic devices for medical research? I’m pretty much asking is it possible that we could make nanobots with this technology?

In the sense of macro-robots that we see in our current state of technology we are probably still a few decades away, but having nanoparticles that could have micro functions similar to how a macro-robot would function is already within the realms of possibility.

I like what you said about manipulating microscopic structures with laser micromachining. I can see how this technology can prove to be useful in the future. My friend wants to learn more about it, so I’ll suggest he find a company that specializes in micromachining. https://precisionmicromachine.com/476-2/?fl

Thanks Sam, please feel free to further browse our blog where we constantly publish a lot of useful articles. You might want to use the suggested article links to learn more about the topic.