Ultrafast Amplifiers: What To Choose Among All Models 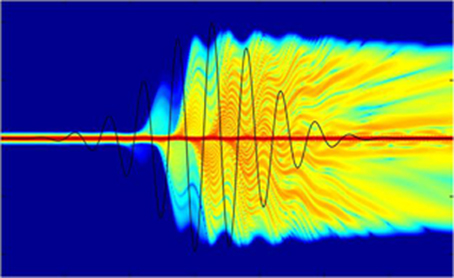 Ultrafast amplifiers can escalate the performance of ultrafast lasers to a new level. Picture shows the electron density of a simple atom during high harmonic generation process induced by an amplified ultrafast laser. Courtesy of the Ultrafast X-Ray Group at the University of Southampton.

Being the earliest kind of laser amplifiers, regenerative amplifiers work very effectively for ultrashort pulses. This type of device is based on the regenerative amplification mechanism, where the pulse is trapped inside the cavity until it extracts most of the energy stored in the gain medium. The pulse trapping and releasing is controlled by an optical switch, usually comprised of a Pockels cell and a polarizer. Because the pulse duration is far below the round-trip time, and the number of round-trips can be controlled, the pulses experience a high gain before being released from the resonator cavity.

A schematic layout of a regenerative amplifier. Courtesy of Google.

Over the past few decades, a large number of scientific and industrial applications emerged for the ultrafast regenerative amplifier systems. For example, the pump-probe multi-dimensional spectroscopy for investigation of chemical reaction dynamics was made possible due to the capability of generating high peak powers concentrated in ultrashort pulses. In the industrial arena, regenerative amplifiers offered a novel technique for micro/nano-machining that rely on large pulse energy for accurate photo-ablation with minimal debris and collateral damage.

However, regenerative amplifiers suffer from several limitations. For example, the pulse energy and the amplification gain can be limited by nonlinear effects. To suppress this limitation a chirped pulse amplification (CPA) method was developed. This technique first stretches the pulse to a longer duration before amplification, so that the peak power becomes insufficient to trigger nonlinear effects. Amplified pulses are then compressed to a shorter duration after they obtain much energy in the gain medium. Another prominent issue is the reduced gain bandwidth which gives rise to longer pulse durations. Pulsewidth of regeneratively amplified and compressed pulses in the CPA method is normally limited to ~40 femtoseconds. Other possible problems are related to the fluctuation effects at high repetition rates during the amplification process, when the pulse energy alternates between several values.

Although regenerative amplifiers are based on multipass design, the commonly referred multipass amplifiers actually adopt a simpler configuration to obtain a high gain. By geometrically arranging multiple passes (usually 4 to 8) of beams through a laser crystal, multipass amplifies can magnify the input power by 106-108 times. This allows amplifying nanojoule pulses to millijoule levels. For a Ti sapphire based multipass amplifier, it is possible to achieve 1 Joule per pulse energy with a 10Hz repetition rate. Peak powers for pulses amplified by multipass amplifiers can be super high. For example, after compressing the pulse duration down to 20 femtoseconds, tens of terawatts (1012 Watts) of peak power can be reached, while more advanced systems have achieved the petawatt (1015 Watts) milestone. 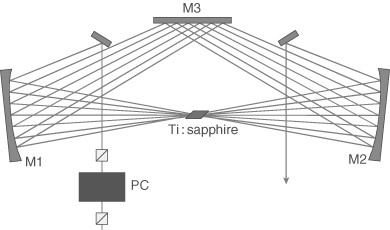 A key advantage of the multipass configuration is the broadband amplification which is made possible by the use of relatively thin gain crystals. The thinness of the crystal is to accommodate the wide angle of acceptance and to ensure an overlap of the passing beams in the gain medium. As a side effect amplified pulses experience limited nonlinear dispersion and, thus, are susceptible to linear compression to very short pulse durations (usually sub-25 fs).

The key challenge around the multipass bulk amplifiers is the complex optics. A typical multipass amplifier usually involves several mirrors to control the direction of the beams on multiple passes. As each beam corresponding to the different passes needs to remain well separated, the alignment for the subtle differences between the angular directions can be challenging. Hence, multipass amplifiers are usually preferred by advanced users.

In recent year, the global laser market has witnessed a remarkable advance of fiber laser techniques, and fiber amplifiers also became a welcomed contestant in the ultrafast amplifier competition. Fiber amplifiers work similar to fiber lasers. They both use rare-earth metal doped optical fibers as a gain medium to achieve light amplification, but in fiber amplifiers there is no laser cavity. Initially, fiber amplifiers were designed mainly for optical fiber communication. This was because when the optical network spans a great geographic area, the damped signals have to be periodically amplified to guarantee effective information transmission. Today, as related techniques become increasingly mature, high-power fiber amplifiers with several kilowatt output are leading a new trend in the material processing industry.

Fiber amplifiers boast a series of attractive features. First, they are very compact because of the great flexibility of optical fibers. Also due to the small mode area and long fiber length, fiber amplifiers can provide gains as high as tens of decibels, and their broader gain bandwidths make them suitable for amplifying ultrashort pulses. Additionally, the high surface-to-volume ratio combined with single mode operation allows obtaining high quality beams at diffraction limit. A typical ytterbium-doped fiber amplifier can easily realize a 10W average power for a 100MHz 10ps pulse train. The peak power of 10kW is also achievable with a large mode area.

However, particularly for high-energy femtosecond pulses, issues such as nonlinear distortion resulting from the strong fiber nonlinearity can severely undermine the performance of fiber amplifiers. Also pulse quality may be affected by high-level chromatic dispersion. Most importantly, even though CPA can largely suppress the nonlinear effects, the equipment setups involve many free-space optics, which may inevitably obscure the advantages of fiber systems.

This type of amplifiers have now penetrated into various branches of ultrafast optical spectroscopy, not only because they can provide gains as high as 80 decibel, but also because of their broad bandwidth that enables the generation of very short pulses down to a few optical cycles, making possible the probing of very fast dynamic processes. Optical parametric amplifiers (OPAs) use nonlinear optical effects in crystal materials to achieve the optical parametric amplification. In this process, a high-intensity, high-frequency pump beam transfer its energy to a low-intensity, lower frequency signal beam and generate a third idler beam at the same time. Not only the signal beam can be boosted several orders of magnitude, the signal beam can also be tuned at a large wavelength range, for example 1.1 to 2.5μm in near infrared OPAs, and  0.45 to 2.5μm in visible OPAs.

A schematic process of parametric amplification. Courtesy of Wikipedia

OPAs work effectively for ultrashort pulses from mode-lock lasers. First, as OPAs provide gain only on the passage of the pump pulses, the amplified spontaneous emission (ASE) around pulses is much smaller than in other types of ultrafast amplifiers. Furthermore, as the pump energy can be fully transferred into energy of signal and idler beams, the thermal loading of the crystal materials are minimal.

Nevertheless, OPAs are not perfect devices for pulse amplification and are challenged by other issues. For example, although OPAs are famous for minimal heating, they are highly sensitive to small amount of local heating, which can sabotage the phase matching. Also for high power devices which require big mode areas, the gain guiding effect can significantly shrink the signal beam, therefore making the pumped energy not fully utilized.

My dad is currently looking for an optical amplifier which will be used for medical application; this equipment is significant because it won’t require any electrical energy conversion. I’m not an expert in this that’s why I never knew that multipass regenerative could help obtain a high gain. It’s also surprising to learn that, it also consists of broadband amplification. https://internethistory.org/optical-amplifier/