Organic transistors are slowly taking over in the transistor space. Invented a few decades ago, they have been gaining more and more attention and proving themselves in such applications as flexible displays. In this article we will explore the history of organic field effect transistors (OFETs) and the principles of their operation. We will also look into 3 key applications of OFETs.

A Brief History of Transistors

Transistors have been around since 1947 when Bell Telephone Laboratories demonstrated that for the first time. Bell Lab’s creation was a result of an attempt to achieve transcontinental telephone service. Transistors were able to help achieve this pursuit. This is because a transistor effectively amplifies signals and switches them. The first attempt at a transistor was a point-contact transistor. The point-contact transistor consisted of gold foil strips on a piece of plastic forced to make contact with a piece of germanium.

As transistors developed, they changed from making them from germanium to making them silicon. Silicon has a much higher melting point and demonstrates better functionality at hotter temperatures than germanium. Silicon is also easier to obtain and cheaper to use than germanium.

Organic Field-Effect Transistors (OFETs) are a relatively recent development. They were first reported in November of 1986 by the Mitsubishi Electric Corporation. This transistor included a polymer polythiophene film on a silicon wafer and oxide layer substrate. These first organic transistors had a mobility of roughly 10^-5 cm^2 V^-1 s^-1. Since then, development has led to mobilities being reported measuring just under 100^-5 cm^2 V^-1 s^-1. This is comparable to some inorganic silicon transistor mobilities.

Schottky Barrier Vertical Organic Field-Effect Transistors, or SB-VOFETs are one kind of vertically-structured organic transistor. The active cell consists of a source and organic layer with a drain electrode on top of it. The active cell sits on top of a capacitor cell that consists of a dielectric layer and a gate electrode. Below the capacitor cell is a substrate. The operation of these types of transistors rely on the modulation of the contact resistance rather than charge carrier densities.

This diagram depicts the layering structure of a SB-VOFET. Courtesy of Wiley Online Library.

Vertical OFETs operate by changing the charge carrier density modulation when a source voltage is applied. Therefore, these types of transistors are not strictly “vertical” as the current can flow both laterally and vertically. VOFETs structure resembles that of planar organic field-effect transistors. It turns out, this is quite advantageous, as much of the manufacturing and processing for VOFETs is already in place due to OFET production.

Since their invent transistors have been evolving and finding applications from everyday electronics to E-Ink Displays. OFETs have not been an exception. Here are a few interesting applications in trendy areas of the tech.

Because organic transistors can be made to be flexible, they are able to be integrated in wearable technology without fear of them being damaged with the wearer’s motion. The ability for the transistors to bend makes the medical community very interested. For instance, these flexible organic transistors can find applications in sensors for bioelectronics. Such sensors could be used in applications where they are attached directly to the skin such as being used for cancer treatments. There is a broad consensus now that they would be very useful in broadening and improving the field concerned with creating  non-invasive sensors. 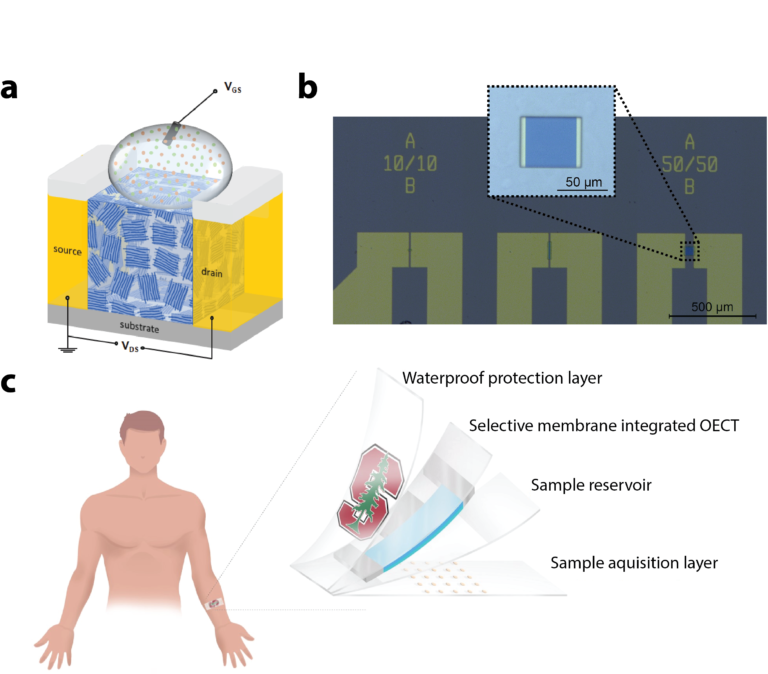 Above: depicts a biosensor using organic transistors from a research group at Stanford University. Courtesy of the Salleo Research Group.

Organic transistors are surpassing the limits to what the engineering community thought possible. From noninvasive biosensors to neural networks and everything in between, there is no telling how great the impact organic transistors will have on new and existing technology.

I think this may be the article meant to be linked in the text for "organic neurofiber transistors": https://onlinelibrary.wiley.com/doi/abs/10.1002/adma.202170202 . The current hyperlink is to an article on liquid crystal alignment: https://pubs.acs.org/doi/10.1021/acscentsci.8b00465 .