Augmented Reality and the Future

Everyone has seen different depictions of future technology in media and entertainment. One of the recurring themes in “futuristic” worlds is holographic screens individuals can interface with. With advancements in imaging, this may be closer to actuality than one may think. Different versions of virtual and augmented reality have captured the imaginations of many. Not only has augmented reality captured the imaginations of many, but it has become the sole focus of research for others. Some are committed to turning the impossible into reality all to enhance the way we live our lives.

In this article we cover:

What is Augmented Reality?

Augmented reality, or AR, is a way of integrating virtual images into a real space. Consider how this differs from virtual reality. Virtual reality is a fully immersive experience. One’s viewed environment is entirely virtual. With augment reality, the natural environment is still within view, only now with the addition of whatever virtual element is altering part of the original environment. The scene becomes augmented by some sort of computer-generated input.

Depiction of an AR scene. Image courtesy of Aberdeen.

This also differs from holography, although the clear lines between defining one from the other are blurred. Both holography and augmented reality can present three-dimensional images to the naked eye, but the methods the images are produced are different.  Holography is a “physical structure that is created using laser beams or light diffraction”. Augmented reality, instead, relies on computer power to create the images that are superimposed on the real world. While not always the case, some versions of AR do require some sort of external device, like a headset or eyewear, to make the augmented scene visible.

How does Augmented Reality Work?

Augmented reality mixes virtual objects with the real world in a believable way using algorithms and software to properly integrate it. It typically includes some sort of source, or light engine, and an optical combiner that creates a virtual image. “The light engine serves as a display image source, while the light combiner delivers the displayed images to [the] viewer’s eye and in the meantime transmits the environment light”. Computer vision is used to construct a coordinate system for a scene. During this, detection software is used to identify characteristic qualities about the environment–for instances, edges or corners. The software can then properly alter the scene and integrate whatever display is desired into the scene.

OST AR is the version of augmented reality that is often depicted in film and entertainment. This kind of display appears to be projected in a manner that renders it a see-through display that can also be manipulated and interacted with. These displays present dual-vision where the display can be viewed while leaving a level of transparency that allows the rest of the environment to remain visible. In this case, the display becomes more of an overlay of the world than a separate element. OST AR presents two situations: one, where objects can be presented into the real world, and two, where real world objects can be manipulated through the virtual AR display.

AR has huge implications when it comes to sharing data with users. AR displays could communicate a wide range of information that would otherwise be unknown about an object to a viewer. For instance, text relaying critical facts that could not be directly observed. AR displays could allow a user to magnify areas of interest from afar. Depending on the construction and programming, an AR overlay could even potentially be created to provide a user with infrared information about an area or building. The possibilities are nearly endless.

One of the primary areas of interest for integrating AR systems, however, is in the medical field. It is widely believed that augmented reality can (and will) revolutionize healthcare and medical training. For instance, information from monitoring devices could be displayed simultaneously in a surgeon’s view while performing a surgery. AR could also display a patient’s medical history, or information about the procedure while operating. All of this could increase the speed, precision, and surety in which a medical procedure is performed.

One major challenge is in creating a headset that is both comfortable for long periods of wear, as well as constructing a field of view that is wide enough for the user. Other factors, such as a tolerable amount of eye strain, must also be considered when designing AR devices. The ability to gesture and interact with the augmented display is also of importance. One of the proposed solutions to this has been introducing freeform optics into the discussion, as they can provide different levels of magnification and aberration correction in a more condensed volume than traditional optical systems. 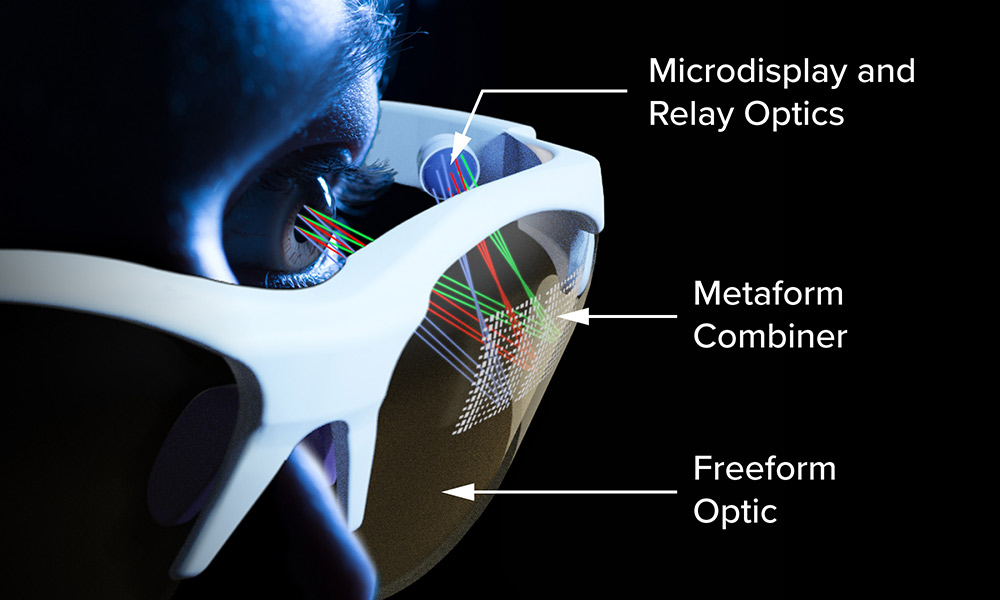 Researchers at the University of Rochester have used freeform optics in their augmented reality glasses design. Their glasses feature a microdisplay that projects onto the freeform optic that makes up the glass. The freeform optic is covered with a thin metasurface layer that conforms to the curvature of the optics. The metasurface is able to collect light from all directions and then redirect it to the eye. It required very careful construction, using electron-beam lithography to carve away some of the metasurface where silver nanostructure deposits needed to be placed. They were able to create a proof-of-concept design for their freeform and metasurface lens combination. While it still has a way to go before becoming a fully functional and user-friendly device, it is a marked advancement in the fields of augmented reality, metamaterials, and freeform optics.