Augmented Reality and Virtual Reality: Behind the Tech and Beyond

Augmented Reality and Virtual Reality are two technologies that are becoming commonplace in the modern world. Virtual Reality is defined as an immersive technology where the user is blocked off from the real world. To clarify, the user’s field of view (FOV) contains only the virtual world that the VR set displays. On the other hand, augmented reality is a technology where the user can see the real world. However, this world includes superimposed digital elements. One of the most famous examples of an augmented reality game is Pokemon Go. In this game, people can see Pokemon animals at real world locations through their device screens. Sometimes these animals were even on people’s shoulders and could only be caught if the person stayed still. 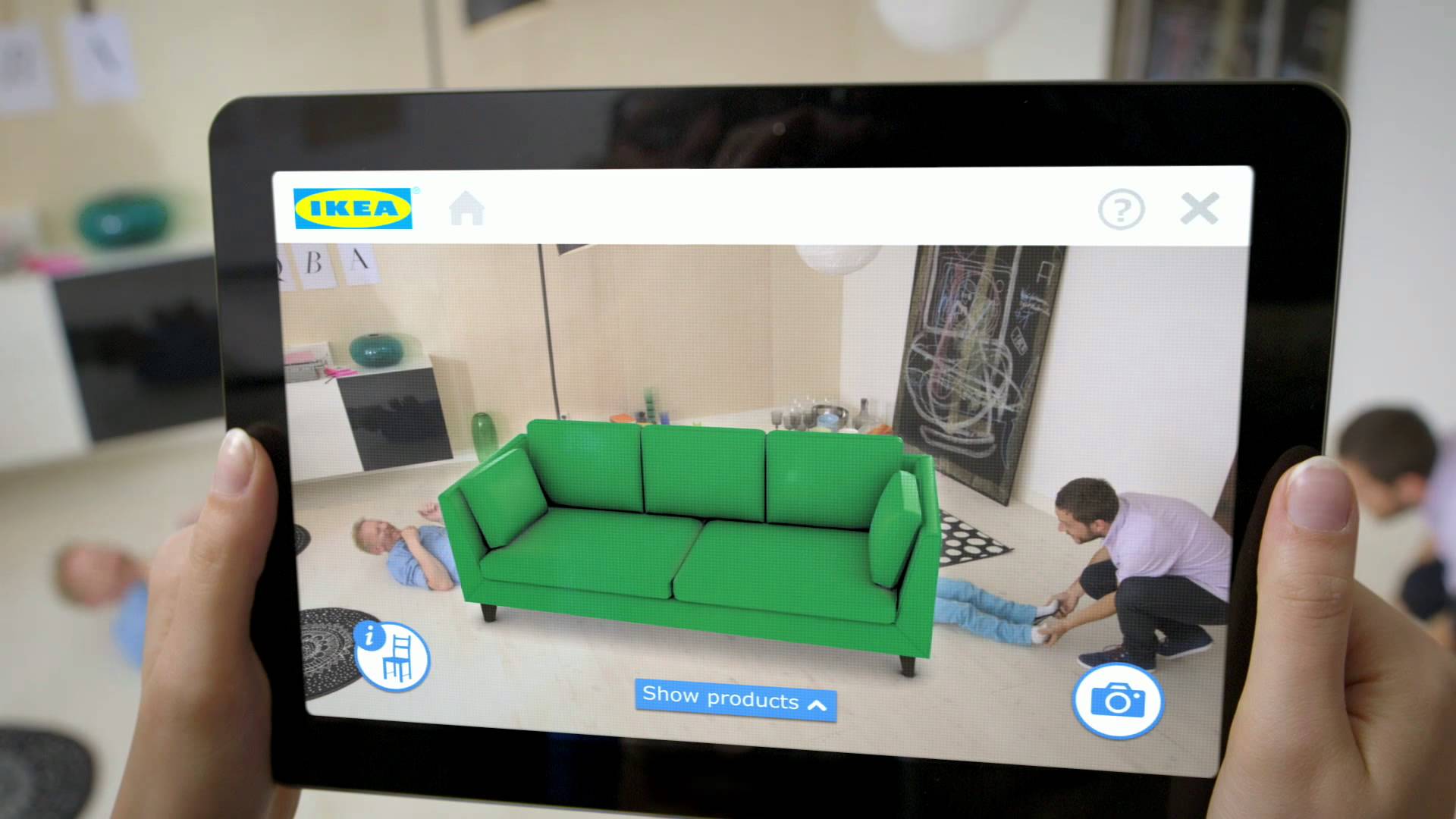 Some fun with the AR ikea app. This app utilizes positional tracking and GPS to determine where to show things by mapping the environment. Courtesy of IKEA.

As we can see, Augmented reality and Virtual Reality sets can be a very inclusive and fun experience when designed right. On this note, it is very hard to actually create a high quality design for AR/VR sets. There are many factors to keep in mind including cost and size limitations. In fact, some of the first VR sets that were built in the 1960s were very costly. Very select few were available to the public, and were quite bulky and more akin to today’s amusement park rides (e.g.Heilig’s Sensorama). Today, our technology has developed to become much more like the sci-fi versions of VR and AR in popular literature of the past, such as ‘Pygmalion’s Spectacles.’  Undoubtedly, we still face many of the same challenges we did in the early stages. In this article we will discuss the optical technologies behind AR/VR sets and their difficulties. 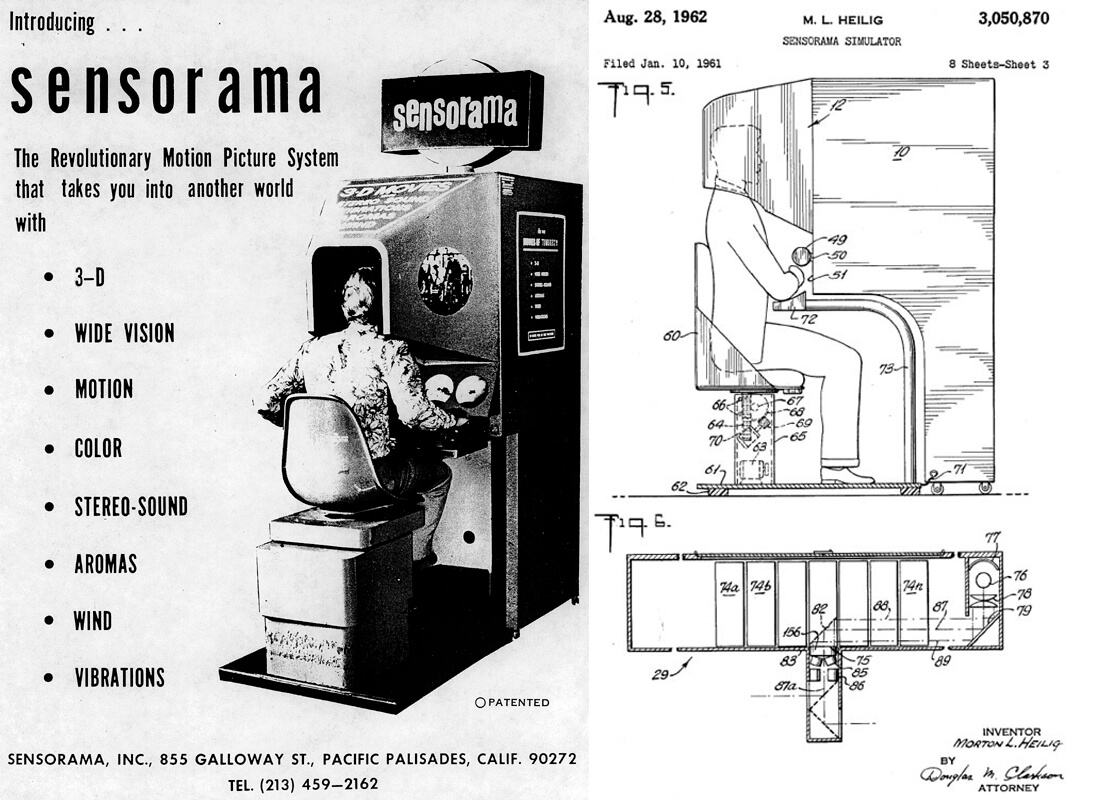 Sensorama was an arcade type booth built by Heilig and patented in 1962. Courtesy of Jworks Tech. 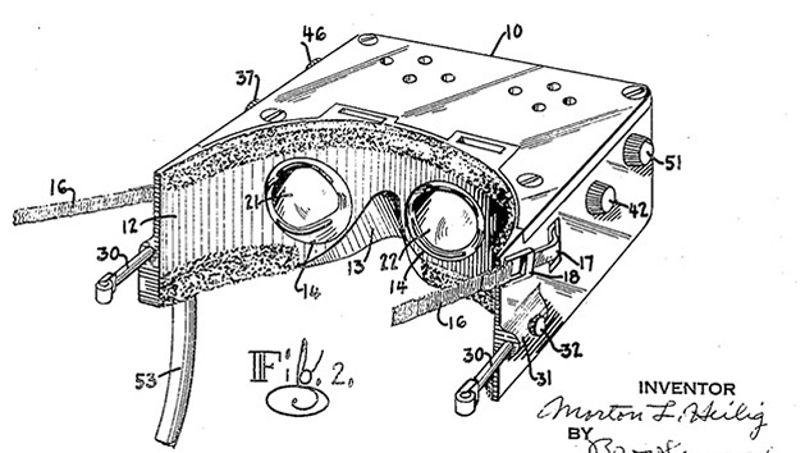 Heilig went on to create the first VR head mounted device in 1960, called the Telesphere Mask. Courtesy of Pebblestudios.

Tech and Challenges of Augmented Reality and Virtual Reality

A basic Virtual Reality set requires multi-display screens, cameras, glasses/ head mounted device, and a computer or mobile device. The head mounted device eliminates any real world light that may come towards the user, and fills their vision with the screens. Additionally, two autofocus lenses are needed between the screen and the eyes in order to track eye movement.  On the other hand, Augmented Reality sets require a device with a screen, and all the computations are done within the device app/ processor. However, just like VR sets the visuals on the screen come from the computer and processors.

On the whole, AR/VR display screens and glasses require three main optical properties. First, they need to be able to collimate light so that images can appear 3-D and exhibit the feeling of distance. Second, the screens need to be able to magnify images so that they can appear larger to the user than what is actually on the screen. Last, the panels should be able to relay light patterns towards the user’s eyes. Following, the glasses used for VR/AR sets follow two types of optical designs: pupil forming and non-pupil forming. 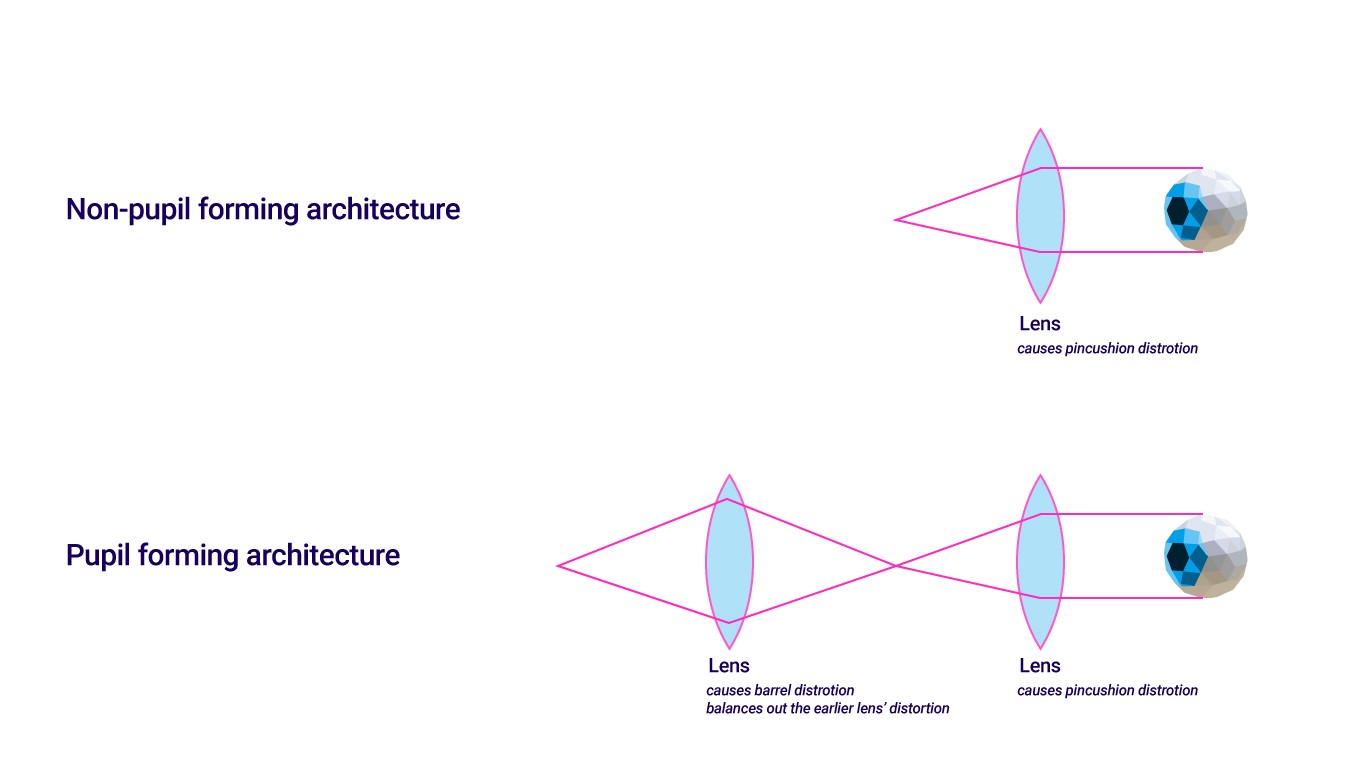 Non-pupil forming displays contain a single lens and magnifier to collimate light from the display screen. These displays are compact and have a large eye opening, but they create an effect known as pincushion distortion. Here, the light becomes very bent and the resulting image can look wonky. In contrast, Pupil forming displays fix this issue with a second lens that produces barrel distortion. Barrel distortion cancels out the pincushion distortion from the first lens, and the resulting picture becomes more clear. Additionally, AR/VR lenses utilize one or more waveguides to help contain and send light to the display panels. The four most commonly used ones are: holographic waveguides, diffractive waveguides, polarized waveguides, and reflective waveguides.

Virtual Reality sets are limited by the human field of view. Our eyes can see only about 200 degrees (horizontal) by 130 degrees (vertical), at maximum. These visual limitations are a result of the average spacing of cone cells in our retinas. Another limitation to VR sets is the number of pixels that a display screen can hold. Since the number of pixels is fixed, the resolution and field of view can only be so large. In order to have a believable world experience, the user must be able to see clear and complete images of the world. However, building higher resolutions for screens is much more costly than the basic screen needed to fill our visual range. 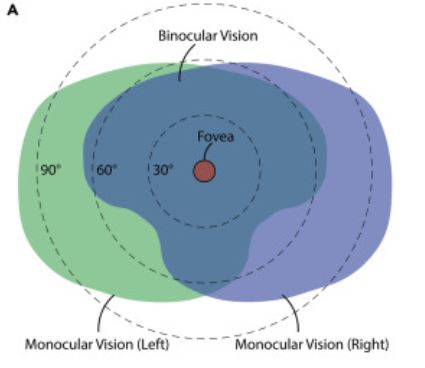 Additionally, AR sets require even better location tracking and GPS signals than VR sets due to their real world interaction. As well as that, a smooth AR/VR experience requires a frame rate of at least 60-90 frames/second. Lower frame rates can cause motion sickness for humans. However, increasing the frame rate requires high quality graphics cards and high computational power. Additionally, this kind of fast paced information shown in the VR world requires a computer with a high bandwidth and low latency. Furthermore, the tracking devices/cameras required to accurately track movement in the real world can take a long time to set up.

Augmented reality and virtual reality has become most commonplace in modern day games. However, the expansive reach of AR/VR could someday touch learning in the classroom and at home. There are many studies that have shown that the inclusion of VR/AR has a positive influence on learning. It opens up a new meaning to what a learning environment is. Before, learning environments were limited to school grounds and field trips. Now with augmented reality and virtual reality, we can easily visit other countries, or even create a different kind of world altogether. Allowing kids to have an immersive, involved experience is unique to AR/VR because it affects individual students’ vision and world.

Other fields that AR/VR can revolutionize include engineering, architecture, and construction. Communication in these fields are mainly visual based and AR/VR can help expedite the process. In fact, AR/VR has been used in environmental design since the 1990s. Additionally, Boeing has reported that AR headsets have boosted productivity by 40% in electrical wiring projects. However, current attitudes towards virtual based design vs real world, and installation time has held back the use of AR/VR in these fields. In the future, newer AR/VR set designs could really help efficiency in these sectors. This is due to the ease of drawing out plans and spatially immersive aspect of AR/VR designing. 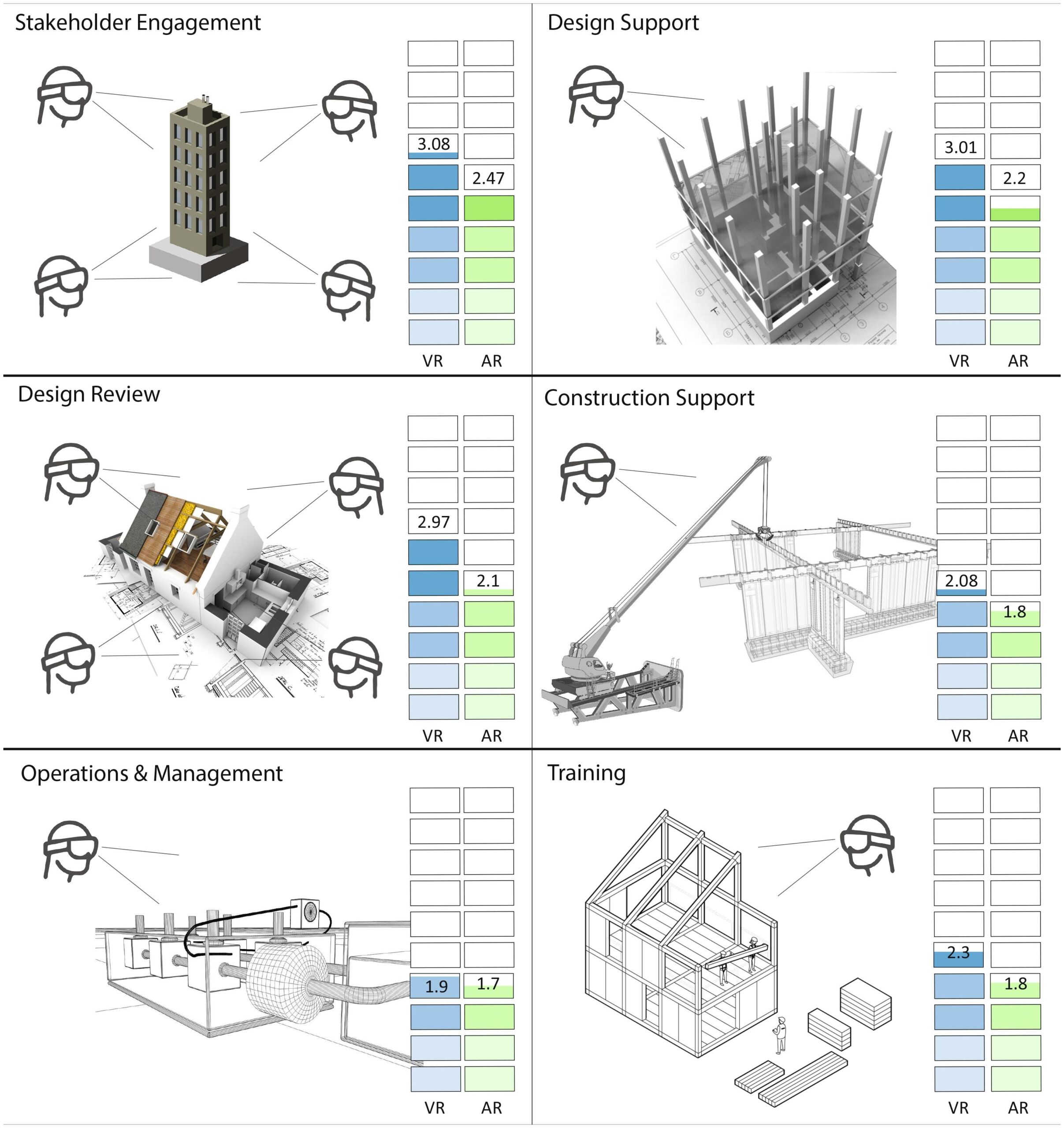 AR and VR cases in the Architecture, Engineering, and Construction sectors and their estimated levels of adoption The plots indicate the level of adoption in projects for the given use-case (1 = not used, 2 = early testing, 3 = basic implementation, 4 = partially used, 5 = fully implemented). Courtesy of Delgado et al.

Augmented Reality and Virtual Reality are technologies that can make our lives easier from designing buildings to picking out furniture. They have been shown to improve efficiency and productivity in the industrial sectors, which bodes well for our future living conditions. In addition to this, these technologies could advance the development of higher quality tech due to their usefulness in visualization and design. AR and VR may soon become commonplace in our everyday lives, like in the predicted “Mirrorworld.”