The Beginnings of Virtual Reality

The definition of virtual reality (VR) has changed throughout history. In 1929, the first iteration of a flight simulator was invented. This allowed pilots to train, without having their first flights be in a physical plane, making flying safer for trainees. Years later, in the 1960s, Morton Heilig developed the Sensorama, which provided simulation for all the senses, even smell. Throughout the later decades, virtual reality continued to develop, but the phrase “virtual reality” did not appear until 1987. Jaron Lanier, of the Visual Programming Lab, who did research in the virtual reality field, brought recognition to the name.

Today, many large tech companies are all releasing VR technology that is becoming closer to the futuristic thought of a completely immersive experience. Oculus Quest and the Sony PlayStation VR are among the more popular ones. In Oculus Quest, playable games range from Tetris, to experiencing the “Jurassic Park” World, to many more. Below is an image of a user playing with Oculus Quest 2. The auxiliary hand sets help create a more immersive video game experience while the eye-box is worn on the user’s head. Increasingly more VR setups are emerging that tend to decrease the device size to get closer to the design of sunglasses. 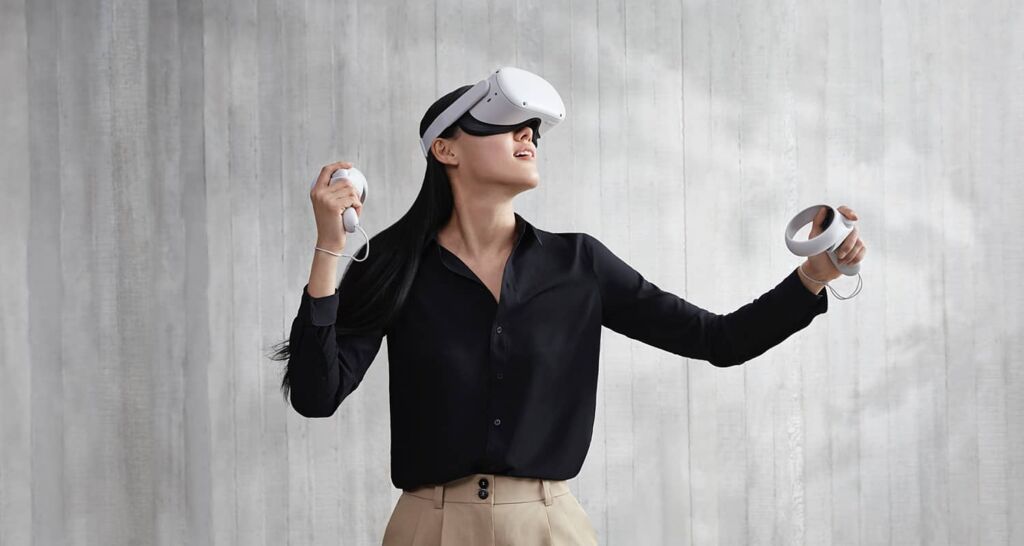 The Oculus Quest 2, which is at the forefront of Virtual Reality Technology. Courtesy of oculus.com

With VR advancing rapidly, the idea is fast approaching that it will be used not only for entertainment, but also for work. In a recent paper, “Holographic Optics for Thin and Lightweight Virtual Reality”, Facebook Reality Labs engineers proposed ways to make VR more applicable to everyday occurrences. Their ideas include using VR appliances throughout the entire workday. This would require lightweight and comfortable device setups. While recent VRs has been contained in a headset, this paper dives into how to make the design sleeker, easier to use, and more realistic. Their aim is to achieve this by making near eye displays with both polarization-based optical folding and holographic optics.

One leap towards a more long term wearable device is the Near Eye Display (NED). NEDs consist of an image generator, an optical combiner, and imaging optics. A desirable NED consists of a sleek and wearable frame, a wide field of view, and high-resolution. A Texas Instruments authorized design house based in Tulsa, Oklahoma recently proposed a design which combine all of these positives and more.

Polarization based optical folding, also called “pancake” folding, keeps the image clear, while only requiring a small amount of space. This allows for a less “boxy” headset and the VR device can be worn for longer periods of time with more comfort. Light traverses the cavity three times, but in the space of one cavity due to a reflective polarizer and a beam splitter. The beam splitter transmits 50% of the incoming light and reflects the other 50%. The reflective polarizer reflects the linear and transmits the perpendicular polarization. A quarter wave plate is placed between the beam splitter and the polarizer to convert light between the linear and perpendicular polarization. The traversing of light three times in the cavity space allows the focusing optic to be a smaller space, while producing a crisper image.

Another means of miniaturizing the architecture of VR sets is through the use of holographic optics. Holograms use diffraction to create a 3D light field. The resulting image is a realistic rendering of the original image. Holographic optical elements (HOE) are optical elements, such as mirrors and lenses, used to create a hologram. HOEs are advantageous over optical elements since they utilize only one material but can perform multiple functions. This leads to thinner, more compact materials – a key consideration for rendering a lightweight VR design. Most recent prototype designs actually incorporate these elements to miniaturize some of the components.

Design Considerations: Putting it all together

In order to design VR devices that allow for long-term use and crisp images, several considerations have to be made. The light source and the display panel are two of the most important components in the architecture. While holographic optics offer meaningful miniaturization, they make the color rendering challenging. This is because holographic lenses bend light differently depending on the wavelength. This can partially be solved through wavelength selectivity.

A Sleek Design of a VR Headset. Courtesy of Facebook Reality Labs

The display panel is another key component. Usually, the display panel, which is the screen that shows the image, emits light in all directions. This includes light that does not reach the eyes. This light that does not contribute to the image can reduce the image crispness through internal reflections. To prevent this, a concept called “directional backlighting” can be employed, which ensures that light is not emitting through all 180 degrees, but rather in a controlled view-field to prevent leakage.

Prototype of a Sleek VR Device

A physical prototype by Facebook Research Labs offers a sleek design resembling an eye piece. In the prototype, a three color HOE was utilized, which solved the color display challenge. The lens diameter was 75 mm, which focused light at 36mm from the lens, creating a compact box. The prototype is 82 mm by 82 mm. For perspective, a regular can of soda is 122 mm. Several tests were performed on multiple prototypes to determine properties like resolution and field of view.

The prototypes they produced showed how combining optical technologies lead to a wide field of view and high-resolution while fitting into a sunglass formfactor. Some of the future work to be performed is to get a full color display, display panels with higher pixel counts, light leakage fixing, all while making glasses that are as light and compact as possible.

Although the idea of long-term experience within a virtual reality may be considered “futuristic”, it may not be as far as we think. The abundance of research and technological developments demonstrate the leaps and bounds made in the VR space with an end goal of providing a fully immersive, and extremely realistic experiences.