Light detectors, also known as photodetectors are common not just in labs, but in our everyday appliances. From automatic doors to video cameras, photodetectors are established technologies that help make our lives easier. Tools like photodetectors have many different types, and it may be flustering to try to sort out which one you need. In this article, we introduce the next step in detecting and diagnosing light, which is gaining knowledge about the tools of the trade. We will discuss how and when to use two different light detectors: photomultiplier tubes and avalanche photodiodes.

PMT stands for photomultiplier tube and it is a light detector that measures the level of light present. Specifically, it works in the ultraviolet, visible, and near-infrared spectrum. PMTs work by producing a current proportional to the intensity of light it detects. Importantly, the proportion is such that it amplifies the light signal by as much as 100 million times. Correspondingly, this is why these types of detectors are great for detecting very low levels of light. Their sensitivity can be attributed to the chain of dynodes that can even catch individual photons that arrive at the PMT.

To further clarify the process, photons are first caught by a photocathode at the entrance of a PMT. In turn, the photocathode produces electrons by the photoelectric effect. These electrons are then sent through the PMT by way of a high-voltage electric field. Lastly, a chain of dynodes help amplify the number of electrons with secondary emission. This sensitivity allows them to be used in a great number of established fields. Namely, they are used in Raman spectroscopy and fluorescence spectroscopy, both of which we have discussed in several articles. Additionally, PMTs are also involved in medical diagnostics such as blood tests and imaging, and even in creating motion picture films. It should be noted for someone who wants to use PMTs, that they are best suited for a project that needs low-noise results. This is of course in addition to the high-sensitivity detection we discussed before. 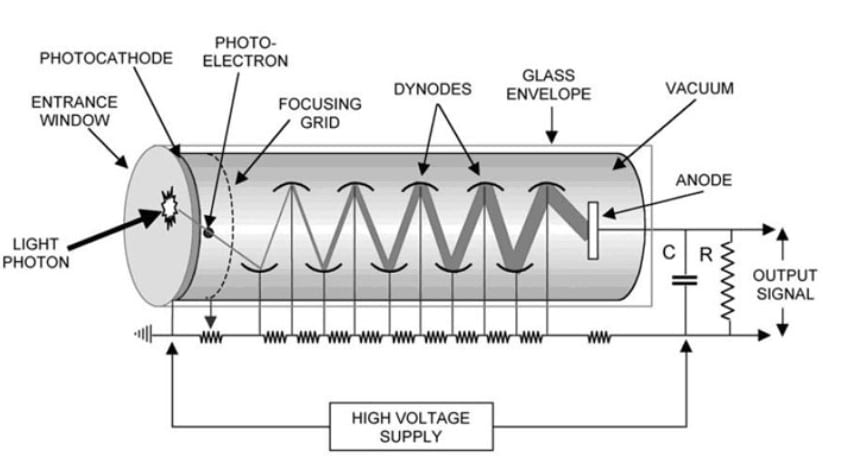 Diagram of components in Photomultiplier tube. Courtesy of SENSE.

How to Use PMTs

PMTs usually require 1000V to 2000V voltage fields to send electrons through their chain of dynodes. They are often given a negative supply because this means the resulting current can be measured at low voltages. Additionally, the corresponding measuring devices can be low voltage. It should be noted that since the supply is high voltage, leakage can occur and produce so-called “dark current” pulses (noise) that may skew the results. Because PMTs are highly sensitive, they must be shielded from any unwanted light in the environment. This may be done with mechanical shutters that cover the tube when the photomultiplier is exposed, or electrical interlocks. Another option is to add a current limit to the external circuit. For instance, when the safe current limit is exceeded, the high voltage is reduced. Without a doubt, shielding is important because the device could be destroyed from overexcitation!

Furthermore, your lab may have strong magnetic fields. For PMTs this could mean electrons would stray from their correct path. In particular, they may not pass through the dynode chain and result in loss of current and gain. Long distances between the photocathode and dynodes will exacerbate this issue. Hence, this should be prevented with magnetic shields like layers of soft iron or mu-metal. With a magnetic shield, the user must maintain it at a certain potential. For PMTs, this shield is often set at cathode potential, which is very high. Thus, this shield should be electrically insulated with some common materials you may have at hand. 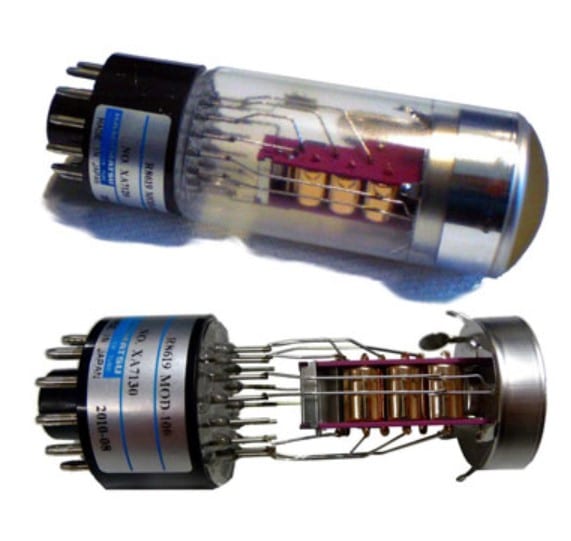 Example of a real PMT, with second picture giving a closer look at the dynode chain. Courtesy of SENSE.

The second tool we will introduce is the avalanche photodiode. These are light detecting devices that are made with semiconductor photodiodes. Additionally, similar to PMTs, they operate at a high reverse voltage. This tool is also highly-sensitive and amplifies the original light signal. However, avalanche photodiodes are different in the way that they process the incoming signal. Average photodiodes take in photons and generate electron-hole pairs, which, in turn, produce current. On the other hand, APDs take in photons with a reverse voltage that causes an “avalanche” of electron-hole pairs. Following this avalanche comes an ionization and a conduction band in the device. As a consequence, more electrons are drawn in and they absorb more energy. As a result, these electrons then send more electrons to the conduction band. Hence, this is called the avalanche breakdown that amplifies the original signal.

It should be noted that internal APD gain is not as large as that of PMTs’. In addition to that, PMTs have a much larger active area. The whole avalanche breakdown occurs within a few micrometers. Avalanche photodiodes are best for projects that require sensitive detectors, low electronic signal gain, and low electronic noise.  Even so, APDs come with some quantum noise and amplification noise due to the avalanche breakdown. Yet, they operate at quantum efficiencies at >400 nm, better than PMTs. Further, they are far more sensitive than ordinary photodiodes and have a high spectral response, which make them preferable in many situations. For instance, APDs are good for aerospace applications (APD arrays), laser rangefinders, and long-range fiber-optics. Some newer applications include particle physics, as APDs can be used for single photon counting in “Geiger” mode. 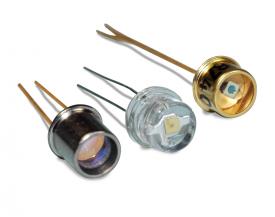 When it comes to detecting light, there are many tools in the industry that seem to offer similar advantages. However, you must consider the special resources required to use each tool optimally. Furthermore, your choice will most strongly be influenced by what you have knowledge of. Thus, studying a few well-established tools like the ones we have introduced in this article will steer you in the right direction. Photomultiplier tubes and avalanche photodiodes are great choices for sensitive light detection needs, each with their own pitfalls. With the right tools of the trade, your project can proceed with as much ease as possible.