Raman scattering phenomenon can be used to engineer broadband tunable lasers and to generate a broad band of frequencies in the IR spectrum. These light sources are instrumental for probing and detecting the vibrational energies in materials. Raman effect in fiber optic cables can also be used to increase the efficiency of this light production with outputs in the order of a few Watts. Today Raman lasers in fibers are available commercially as a distinct category of tunable fiber lasers.

In this blog post, we will discuss the physics of Raman lasers, their improvements using photonic crystal fibers, and supercontinuum generation through Raman scattering.

What is Raman Effect?

Molecular vibrations have their spectral energies in the infrared to microwave region. Raman effect occurs when the input light frequency is absorbed by the molecule and scattered light is emitted. It is important to note that the vibrational energy can be emitted or absorbed during the Raman Scattering process. When a portion of the incoming light is absorbed, it is referred to as Stokes shift. Similarly, anti-Stokes shift increases the energy of the scattered light. These changes can be detected using Raman spectroscopy and can be used to characterize the structure and composition of molecules and crystals by detecting their vibrational modes.

Raman effect occurs because of the polarizability of a molecule. The latter is the degree to which a molecule can generate dipole moments under the influence of an external electric field. It turns out that the polarizability can change based on the molecular vibrations. Most of the input light does not sense this change. However, one in a million photons can be affected by these vibrations causing the molecule to absorb or emit a specific vibrational energy mode.

To engineer light amplification for lasing, Stimulated Raman Scattering (SRS) can be used to enhance the efficiency of the Stokes shifted scattered light. In this process, a pump beam matching the Stokes shift frequency is fed into the system to induce transitions with a higher probability. The gain in output Stokes shifted photons is characterized by the amount of signal intensity, pump intensity and Raman gain coefficient which is typically in the order of pm/W.

In practice, optical fibers are better suited for Raman amplification. This is because high pump and signal intensities can be confined in the fiber core which increase the conversion efficiency. Fiber Bragg gratings are used to set up optical cavities within the fiber core. These cavities force the photons to bounce back and forth a few times before they leave with more photons produced with every round trip. The output power can still be quite low and so multiple Bragg grating cavities are cascaded in the fiber core to increase the power output. Powers in the order of a few Watts have been obtained using this method.

Fiber Raman lasers are already available in the market as broadband tunable lasers. This availability paves the path for various applications and enhancements:

Photonic crystal (PhC) fibers offer superior confinement in light intensity compared to conventional optical fibers. The mode volume can also be kept quite small. This factor increases the light intensity that can be guided in PhC fibers and is thus attractive for any non-linear applications, of which Raman effect is one. Raman amplification using PhC fibers are thus excellent candidates for the future market of Raman fiber lasers.

Raman fiber lasers can give output light that is Stokes shifted from the input frequency. If sufficient amplification is achieved such as in photonic crystal fibers, the Stokes shifted frequency can be further Stokes-shifted. Thus the process can go on to generate a series of frequencies for broadband output laser light, which is referred to as supercontinuum generation. Fibers emitting in the majority of the IR spectrum have been demonstrated using PhC fibers. Applications of such fibers include broadband spectroscopy with many wavelengths for probing the vibrational states of molecules, solids, and even human tissue. 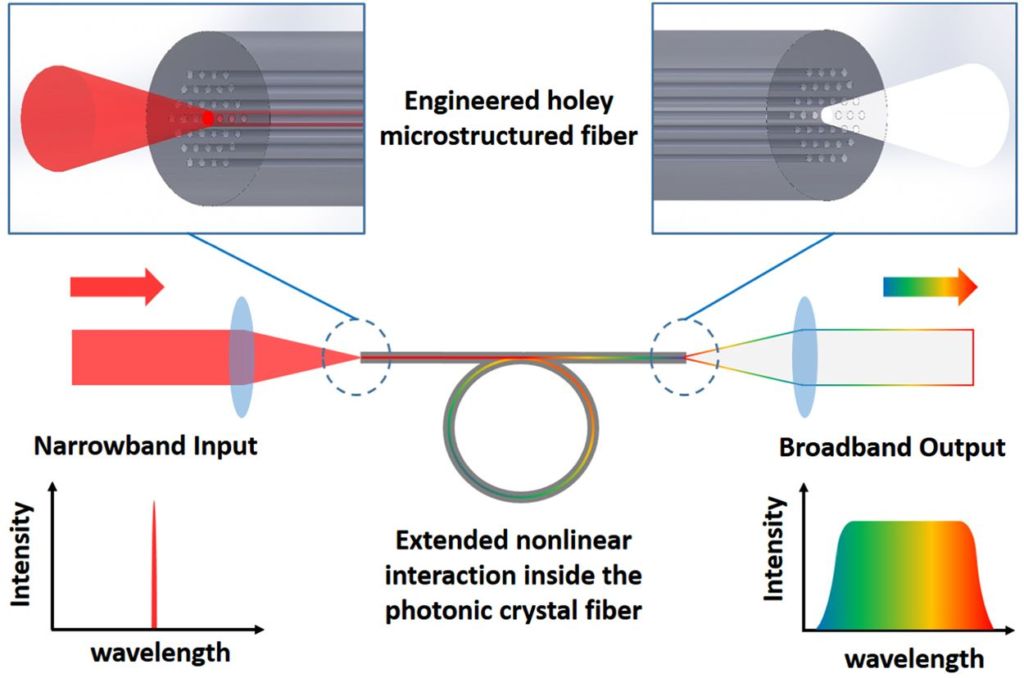 Silicon is considered to be a poor absorber and emitter of light. This is because of the absence of a direct band gap causing light absorption to be inefficient, making silicon a poor choice for manufacturing semiconductor lasers. However, Raman effect in silicon can be used to make silicon lasers as it does on depend on whether the material has a direct band-gap. Instead, it depends on the coupling of vibrational modes with the polarizabiliy of the molecule. Interestingly, this observation led to the demonstration of Raman lasers using silicon by Intel.

Silicon photonics is a rapidly growing field trying to use the low loss capability of silicon in the 1.55 um window to design waveguides and resonators out of silicon on a micrometer scale. While lasers made from other materials can be incorporated with silicon photonic devices, an all-silicon laser can reduce the overall device integration cost.

In conclusion, Raman lasers are an important tool for fundamental research and exploration in several forefronts of technology. Despite the maturity of the science behind the technology, recent advances in photonic crystals, and semiconductors promise further advancement of these tools in the near future.