Prism Types and their Applications in Optical Systems

This is an extension on our prior blog post “Prisms: A General Overview” that can be found here. In this post, we will include a further discussion of various commonly used nondispersive prism types and their applications.

As previously established, an image (acting as the object) can be flipped about an axis or rotated depending upon the amount of total internal reflections experienced in the optical path. For explanation’s sake, we will use the commonly used letter ‘R’ and imagine it imaged through a prism. Parity (or handedness) is a way to describe the orientation of the image. Describing an image as right-handed or having even parity means that though the resulting image might be rotated, if it continued to be rotated, it would eventually be identical to the ‘R’ that went in. Unsurprisingly, this occurs when there is an even number of reflections. Describing an image as left-handed or having odd parity means the resulting image underwent an odd number of reflections and is now reversed. In this case, no matter how much the ‘R’ is rotated it is still reversed—it looks backwards, or like an ‘R’ that was flipped over the vertical axis.

This kind of prism has even parity, is right-handed, and inverts the image. They are simple in shape—the reflective surfaces create a three-dimensional glass isosceles triangle. Porro prism pairs are used in binoculars and are referred to as image erecting. When the image passes through the binocular’s objective lens, the image will be inverted. The Porro prism pair inverts the image again, so it is oriented the correct way up when the image passes to the eye lens for viewing. 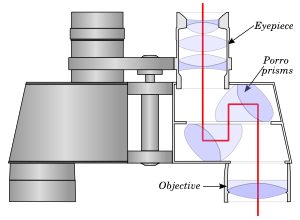 This diagrams the optical path through the Porro Prism pair and through the objective and eye lens in a pair of binoculars. Courtesy of Wikipedia

An Amici Roof prism is a Right-Angle prism with a roof. A roof adds another reflection and in schematics are typically denoted with a ‘V’ on the surface with the roof. There is a dispersive type of Amici prism, but the nondispersive Amici Roof prisms revert and invert an image and deviate the incident light by 90o. This makes it popular in eyepieces of telescopes or binoculars, as it will erect an upside-down image that is passed through it. Amici Roof prisms allow a more streamlined binocular design than when using a Porro Prism pair.

Pechan prisms have six reflections creating a 180o rotated right-handed. These prisms are used in conjunction with Schmidt prisms in binoculars. Schmidt-Pechan psrisms are popularly used in binoculars and create the same streamlined look as Amici binoculars but pass more light through the system than the Amici.

These prisms are pentagonal in shape. They deviate a beam by 90o no matter which face the beam is incident. The roofed version of these prisms is commonly known for the role they played in single reflex cameras. Since the Pentaprism produces even parity and right-handed images with no rotation, it allows the image in the viewfinder to be the correct orientation and at eye-level. Full-frame DSLRs use a mirror configuration instead that acts the same as a Pentaprism. 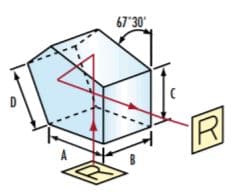 This diagrams the optical path through a Pentaprism. It exemplifies the 90-degree deviation that characteristic to the prism. Courtesy of University of Arizona

A corner cube is aptly named since its design looks much like three adjacent sides of a cube. The light reflects of each plane until it is directed back to the source. The corner cube is a retroreflector. It reflects light back at a specific angle irrespective of where/the angle the beam originated from. Typically, corner cubes are designed to reflect light directly back where it came from, however they can also be designed to reflect them at a specific angle. They are referred to as spoiled retroreflectors when the reflection angle is set to something other than 180o. These properties make it useful in a versatile range of applications ranging from bike reflectors to defense applications. 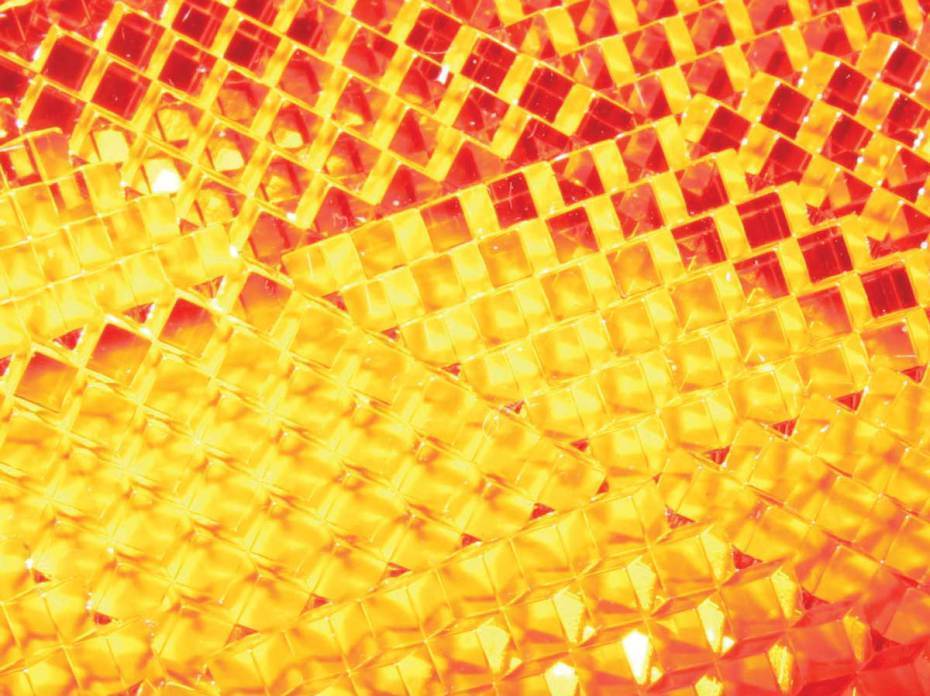 A close up of this reflector reveals that it is made up of corner cubes. Courtesy of Make.co

One specific application of using retroreflectors is the Lunar Lasing Ranging RetroReflector (LRRR) array used in the Lunar Laser Ranging experiment for the Apollo 11, 14, and 15 missions. This array is made up of 100 corner cubes and was placed on the moon by astronauts. A laser was directed at the retroreflector to determine the roundtrip distance between the earth and the moon. This distance can be measured within a 3 cm accuracy. The reflectors placed for the Apollo 11 mission still provide data today about the moon’s orbit.

Dove Prisms are trapezoidal in shape. They create an inverted left-handed image. An interesting fact about dove prisms is that as the prism is rotated about the optical axis, the image rotates twice as much as the rate of the prism rotation. For instance, if the prism is rotated 15o the image rotates 30o. This makes it useful as an image rotator in many optical systems. In some cases, a Dove prism can replace a retroreflector. This would be preferable when one has limited space or a mount is more convenient for using a Dove prism.

While this compilation of prisms is by no means comprehensive, it should provide an idea of the potential use for such prisms in a given optical system and why they might be used.