Ultraviolet Doppler Optical Absorption Spectroscopy (UV-DOAS) is a long distance measurement technique used for detecting chemicals in the atmosphere. This technology is important in our modern world where pollutants are thrown into the atmosphere from a variety of sources. For example, vehicles and factories emit a lot of greenhouse gases like ammonia, and nitrogen oxides. These smog chemicals are building up in the atmosphere and are detrimental to people’s health, causing conditions that make it difficult to breathe.

Pollutants may also be contributing to Global Warming. Climates in many regions are becoming increasingly hostile throughout the world, and coastal peoples are losing their homes. Our resources are dwindling, and life will soon become very difficult across the globe. However, with technologies such as UV-DOAS that help us monitor pollutants in the atmosphere, we can make steps toward lessening the effects of certain pollutants and slowing down the consequences of their use.

In this article we will explore the principles of UV-DOAS and its usage in air quality management, including imaging techniques and notable experiments.

The basis of operation for UV-DOAS is the Beer-Lambert Law. This law says that the amount of light absorbed & scattered by a substance is proportional to the amount of molecules in it. For example, each gas in the atmosphere absorbs a different amount of light, and therefore has a different chemical signature. The UV-DOAS technique takes advantage of this to simultaneously measure and distinguish the different gases present in the air.

In practice, the DOAS technique requires a tungsten halogen, deuterium, or high-pressure xenon lamp as a light source.  The lamp produces a beam of light that contains UV, visible, and infrared wavelengths. First, the lamp sends a light signal along a chosen path and a receiver with an optical fiber receives the signal at the end of the path. Next, the fiber sends the signal to an analyzer component consisting of a computer and a spectrometer.

The computer’s purpose is to calculate how much light was absorbed by the gases along the path. It does this by comparing the original signal to the final signal. In the next part of the process, the spectrometer uses an optical grating that functions as a wavelength filter. In other words, the spectrometer categorizes all the wavelengths contained in the incoming signal to relevant reference spectra, like digitized sound signals on your phone. Using both the computer and spectrometer, the absorption factors are identified and substance concentrations are distinguished with high accuracy. 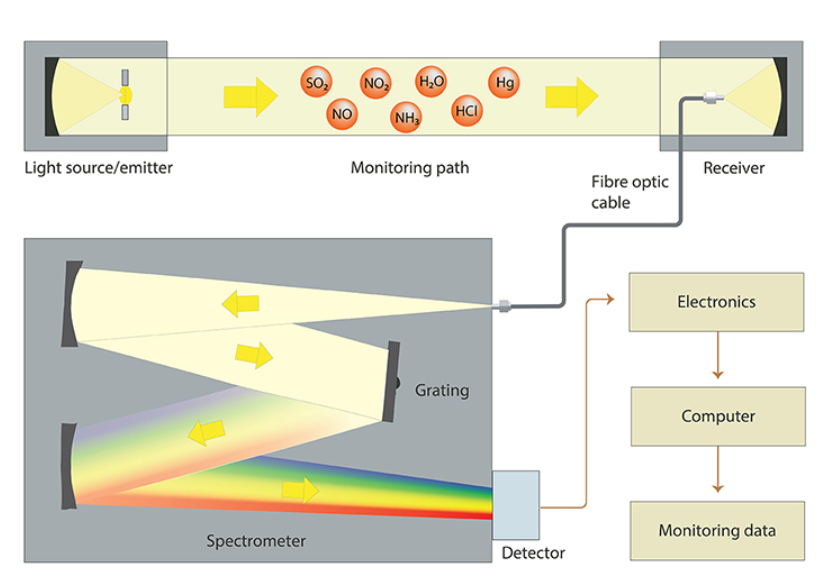 The most common usage of UV-DOAS systems is for monitoring smog emissions (sulphur oxides, nitrogen oxides, formaldehyde, lower level ozone) from vehicles. Ranges for these instruments can go up to ten kilometers, allowing for mathematical averaging over small paths. Averaging provides a more accurate description of atmosphere composition than small point sources. UV-DOAS systems also have the advantage of low operating price over other available point source equipment on the market.

Between 1999-2007, the MDEP installed a UV-DOAS system at the University of Southern Maine to monitor emissions coming from the Interstate 295 Freeway. The lamp was set up over the library, while the receiver component was established in a commuter parking lot further down the freeway. Real-time measurements of ozone, sulfur dioxide, nitrogen dioxide, benzene, toluene, total xylenes, formaldehyde, and phenol gas levels were available on their website. It should be noted that ozone in Earth’s lower atmosphere results from these pollutants reacting together, and is harmful to human health. Some higher-dimension UV-DOAS tomography systems have been developed and experimented with by Pundt et al. in 2005. In the next section we will explore DOAS tomography technique, its system setup and the work done by Pundt et al.

DOAS tomography setups for the measurements of cross sections of vehicle exhaust gas plumes at right angles to a motorway in China. Setup (a) was used during the motorway campaign BAB II. Two DOAS telescopes were placed on opposite sides of the motorway. 4 retroreflectors were mounted on two cranes in about 800 m distance. With the stepping technique 16 light beams were realized, 8 crossing and 8 going parallel to the carriageway. The enhanced setup (b), consists of 4 telescopes and 9 retroreflectors.
Courtesy of Laepple.

Tomography is an imaging technique used to form a 2-D or 3-D picture of materials/gases section by section. In UV-DOAS tomography, light source(s), multiple retroreflectors, and telescopes are used to map concentrations of chemicals. The retroreflectors are placed at different heights and distances such that the DOAS system produces the clearest image. Additionally, the number of light sources depends on the dimensional map needed. For example, 2-D tomograms require a single light source while 3-D tomograms require two or more light sources. Recent research developments at the University of Heidelberg have been made such that one light source can measure six different paths (Mettendorf et al.).

A notable experiment was done by Pundt et al. over a major highway in Milan, Italy. They utilized two 50 m towers on opposite sides of the freeway, about 700 m apart. They then placed four retroreflectors on each tower in a straight line, 10 m apart. Next, the DOAS instruments used background radiation reflected from the two towers as a light source. Following this setup, the DOAS instruments took measurements of the vehicle emissions and other pollutants from 16 paths across the highway. Finally, they achieved successful two- and three- dimensional tomograms that showed pollutant concentrations to be at their highest in the close proximity to the highway.

UV-DOAS tomographic map over a motorway in BABII campaign.
On the left image we see during day time the exhaust gases were driven away from the carriageway by breeze. During morning rush hour traffic fumes were elevated. At nighttime the wind-speed at ground-level was almost zero which lead to higher concentrations.
Courtesy of Thomas Laepple.

Factories, farms, and transportation vehicles producing smog and pollutants are rampant in the modern age. To prevent and address the consequences of these pollutants, we need to become more aware of exactly how much and what kind of chemicals are staying in our atmosphere. UV-DOAS is a promising technology that can provide us with data to raise more awareness about the true impact of current processes and their byproducts.