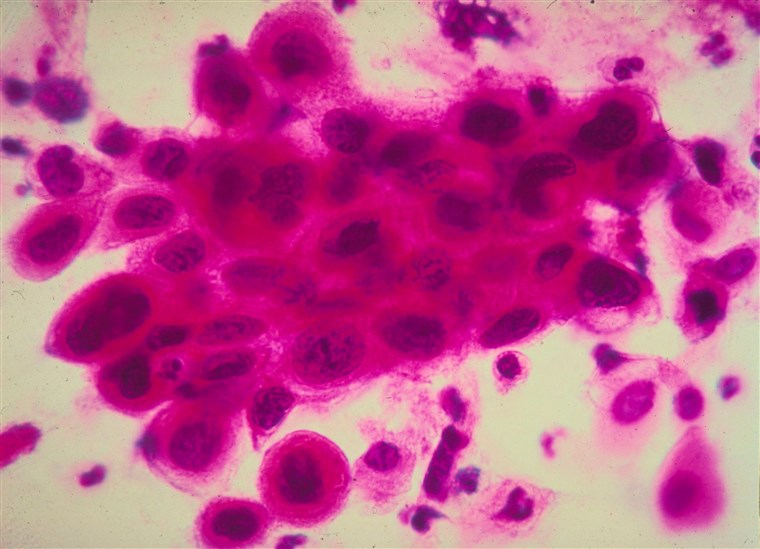 The World Health Organization estimates that there were 570,000 new cervical cancer diagnoses last year. This includes over 13,000 cases in the United States alone. The statistics are daunting, but regular screening procedures can make a dramatic impact on women’s health. Incidence rates have dropped 50% since 1975 due to widespread screening. Doctors now encourage most women to get screened every 3-5 years starting at 21 years old through their early sixties. Regular screenings greatly improve the chance of catching cervical cancer at an early stage, when the 5-year survival rate is still 92%.

The current screening procedure involves first testing samples of cells collected from the squamocolumnar junction of the cervix. Doctors will recommend a follow-up test if the results show signs of abnormalities. If the concern persists, doctors perform a colposcopy with biopsy. Microscopic analysis of the sample identifies cervical cancer and its precursor, cervical intraepithelial neoplasia (CIN). This early-stage indicator appears as neoplastic lesions along the ectocervix and appears in 75% of invasive cervical carcinoma cases. The lesions are detected as various changes in the squamous cell nuclei including nuclear size, density, morphology, and cytoplasmic ratio.

The severity or grade of the neoplastic lesions indicate the stage of the dysplasia. The lesions concentrate in different areas with mild dysplasia (CIN 1), moderate dysplasia (CIN 2), and severe dysplasia (CIN 3).  In many cases, patients have to wait one month or longer to receive their biopsy results. A complete diagnosis can require multiple biopsies of “histologically-normal” areas, adding both time and cost to the screening procedure. This has inspired researchers to develop a real-time,minimally-invasive detection system for cervical precancer.

Currently, specialists use endomicroscopy probes capable of obtaining real-time microscopic mages in tandem with colposcopy. While this method provides high-resolution images, the field of view is limited to specific sites chosen by the clinician.  Mosaicing algorithms can stitch neighboring images together for an expanded view; the technique, however, is difficult to implement in-vivo due to geometric constraints.

Researchers with Rice University and the University of Texas united their specialties in bio-engineering, pathology, and gynecology to develop a novel Cancer Screening Patch (CASP). The system uses a waveguide to transmit high-resolution, full field-of-view images to an ex-vivo optical scanner. Their paper published in Optics Express outlines the design and concept of the CASP as well as its viability to operate in-vivo.

The custom-designed waveplate is composed of strands of PMMA and polystyrene so that it can conform to the shape of the cervix and maximize contact with the tissue of interest. The strands are drawn into Anderson fibers to optimize transmission. This waveguide serves two critical purposes: it translates illumination to the tissue sample and guides emission back to the proximal end so it can be scanned by collecting consecutive frames. The team’s waveguide design eliminates complications from uneven scanning, and a cross-correlation algorithm stitches the high-resolution frames together. These features make it possible for the CASP to identify the size and location of lesions. The researchers confirm that the system’s field-of-view encompasses the squamocolumnar junction and surrounding ectocervix at a resolution high enough to image subcellular features. 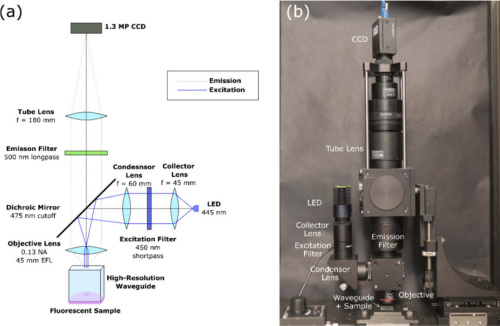 (a) Design of the epi-fluorescence scanning microscope (b) complete CASP benchtop system. Courtesy of Optics Express.

Validating the CASP System with an Ex-Vivo Study

Once they conceptualized the in-vivo technique for cervical cancer screening, the team designed and built a benchtop prototype to validate the CASP imaging method. The prototype features a mounted high-resolution waveguide that is in direct contract with imaging specimens. A wide-field epi-fluorescence microscope scans the waveguide’s output to reconstruct a large-field image. A 455 nm LED illuminates the proximal end of the faceplate in a Koehler illumination setup. An objective lens captures emission which then passes through dichroic and long-pass emission filters. Finally, a tube lens focuses the image onto a CCD.

The researchers mounted the microscope on two linear stages to capture two fields-of-view with significant overlap, therefore providing a mechanism to reconstruct a full image. A fast registration algorithm calculates the cross-correlation between consecutive frames with discrete Fourier transforms. Further details on the mosaicing algorithm are available within the research team’s paper.

The researchers evaluated the imaging and mosaicing abilities of the system with a sample of stained lens paper. They acquired 300 frames with a field-of-view of 20 mm x 4 mm and overlap of 75% to construct the large-field image. The system reached top registration speed of 1.35 mm/s and frame rate 8 frames per second. Results show minimal registration error artifacts and consistent size and morphology of spatial features.

The team then tested the CASP’s ability to differentiate between normal and precancerous cervical epithelium. The study examined samples from patients who received a loop electrosurgical excision procedure for cervical precancer. Preparation of the samples required staining the ex-vivo tissue with a proflavine solution before CASP imaging. After imaging, the researchers returned the tissue samples to the pathologist for histopathological examination. The pathologist classified all samples by CIN levels, as described above.
Samples were mounted on the optical table in contact with the distal end of the faceplate.

The researchers evaluated the sample at multiple locations to test the limits of the field-of-view. The team found that six of the eighteen ex-vivo samples were incompatible with the faceplates because they were too thin to make contact over a large area of interest. This constraint, however, is unique to the ex-vivo study because the samples had to adapt to the machined waveguide; the guide will conform to the shape of the cervical surface during in-vivo processes. 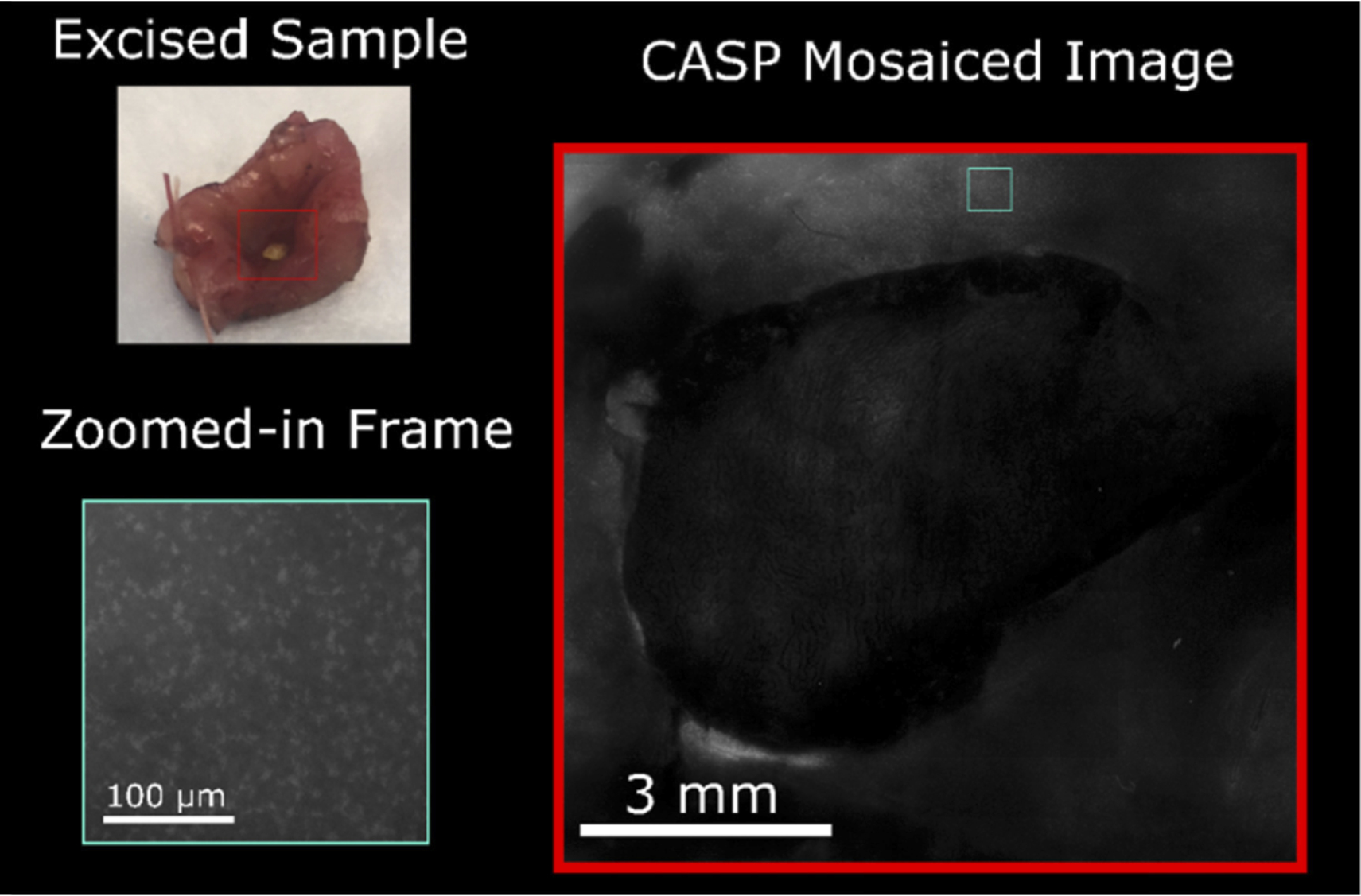 A mosaiced image of an ex-vivo sample with low grade dysplasia. Courtesy of Optics Express

Above is the mosaiced image of one of the twelve samples thick enough for ex-vivo CASP imaging.  We see that the CASP can effectively image across the tissue sample while also detecting subcellular features. The researchers were able to focus in on nuclear features within regions of interest to evaluate their N/C (Nuclear-to-cytoplasmic) ratios, a validated metric of precancer in cervical tissue. Concentration of nuclei in the squamous epithelium increases with each precancerous stage; correspondingly, the CASP images show dramatic increase in nuclei density and area when comparing low-grade neoplastic tissue and high-grade neoplasia.

The research team also rendered a histological map based on a sample with a precancerous lesion in a known location. The map allowed the researchers to evaluate the CASP system’s ability to identify specific abnormalities. They imaged the lesion and the surrounding healthy tissue then separated the nuclei from the background to calculate the N/C ratio. The ratio measured to be .135 at this intersection when evaluating the full CASP image area;previous studies conclude N/C ratio is significant when greater than .16. The researchers then selected and magnified twenty sites at the edge of the lesion.Sites were flagged as “abnormal” when their ratios measured above the .135 baseline.All sites from patients with no neoplasia or CIN 1 [measured] below the ratio threshold; all patients with high-grade neoplasia provide samples with at least one abnormal site.

The researcher team from Rice University and the University of Texas designed, built, and demonstrated a large field-of-view imaging system for cervical cancer screening. Their paper in Optics Express outlines how their system could function in-vivo and also includes results from their ex-vivo experiments. They utilized a polymer faceplate that could not only achieve higher resolution than fiber bundles currently used for imaging nuclei. The faceplate is also rigid and machinable, and thereby more easily customizable than most commercially available products.
The team proposes improvements to the screening system including incorporating a higher megapixel camera censor to reduce scan time. Future work involves optimizing the system and faceplate dimensions for use in in-vivo clinical studies.

For more on their groundbreaking work, find their paper here.

This article is brought to you by FindLight with the support of Suruga Seiki, a leading manufacturer of motion control systems.