Light Fidelity, also known as Li-Fi, was invented by Professor Suat Topsu from Paris-Saclay University and introduced worldwide by German Physicist Harald Haas in a 2011 Ted talk. Haas did a demonstration using a simple LED lamp to transmit data and stream a high-definition video on the screen. He described Li-Fi technology as “data through illumination.”

This technology utilizes the visible spectrum of light to transmit wireless data, just like Wi-Fi does. However, Wi-Fi utilizes the radio frequency (RF) spectrum, which is becoming increasingly crowded. As more and more devices connect to the internet every year (IoT), data transmission rates are slowing down. The visible light spectrum is over 1,000 times larger than the RF spectrum, and does not give off harmful radiation to human bodies as RF may. Li-Fi can also send data at a rate of 100 Gbs per second, 10 times faster than the upcoming Wi-Fi 6. The time is now to welcome a new era of wireless data transmission! The best usages of Li-Fi are for secure data transmission and lightening of the increasing load on the RF band.

In this article we will discuss the principles of Li-Fi and a few different applications of this exciting new technology. 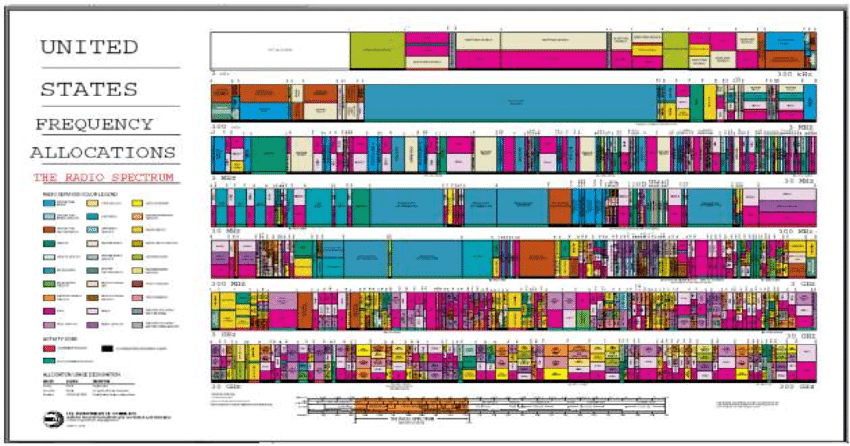 Radio Frequency Spectrum allocations. As we can see, it is very crowded. Courtesy of the FCC.

Li-Fi works by utilizing Light modulation to correspond to parallel data streams. This appears in the form of subtle changes in the intensity of the light that we cannot see with the human eye. A common technology that is similar to Li-Fi is the remote control. Remote controls utilize “infrared blasters” which point infrared light towards a receiver device. For instance, a television. However, remote controls only utilize a single data stream. On the other hand, Li-Fi can utilize parallel data streams and arrays to send large amounts of data. Parallel data arrays can be created by utilizing multiple LEDs. In the following sections, we will discuss how exactly each LED sends a data stream.

Li-Fi technology systems consist of two parts, a transmitter and a receiver. The transmitter part includes the LED component. LEDs can send information by flickering on and off. The flickering is equivalent to and ON(1) state, and OFF (0) state, similar to the Morse code. They flicker so fast that the human eye cannot tell when it is off. This way of transmitting data is called “Visual Light Communication (VLC)” or a.k.a “Li-Fi.” The frequency range the transmitter operates in is between 400-800 THz.

In order to control the LED bulb and pattern, a few components are needed: 1) a printed circuit board (PCB), 2) RF power amplifier circuit (PA), 3) enclosure. Note, these parts can be put together as a microchip. First, the PCB includes a micro-controller that handles the electrical signals. These signals dictate the LED light patterns. Further, the micro-controller works by processing the light signal with some modulation techniques including: Intensity Modulation (IM), Direct Detection (DD), and On-Off Keying (OOK).

Second, the PA component generates a radio-frequency signal that will create an electric field around the bulb and generate the plasma that turns the bulb on. Third, the enclosure’s function is to contain all the components and to act as a heat sink. Therefore it is often constructed of aluminum. 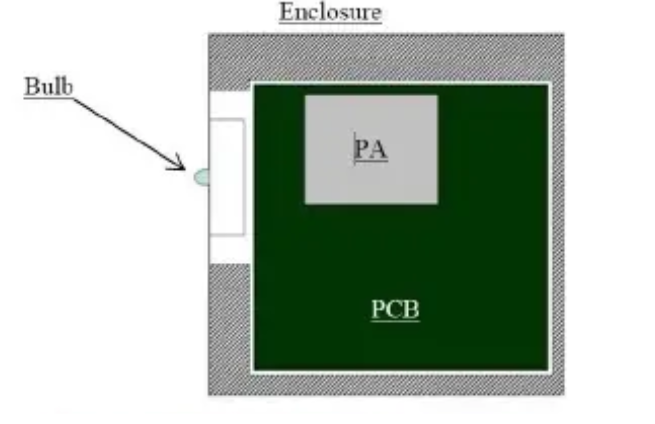 Diagram of sub assemblies in Li-Fi transmitter. Courtesy of Nagabandi.

The Li-Fi receiver utilizes a PIN photodiode that will interpret the coded light data. Next, the photodiode takes the subtle changes in light amplitude and ON/OFF pattern and converts them into electrical signals. Subsequently, the electrical signals are processed into digital data and sent to a device of your choice. 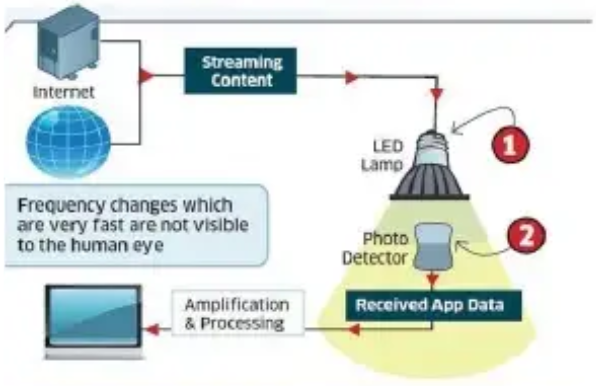 One important application of Li-Fi technology is in emergency communications. Often during disasters, lines are down and people cannot call operators for assistance. Likewise, people may be in tunnels or subway stations where service does not reach. Moreover, many ordinary people do not know what to do in times of disaster and need guidance. For that reason, Li-Fi is a great data choice that would be able to reach those locations as long as there is some power source.

Another application is in Underwater ROVs (Remotely Operated Vehicles). These vehicles operate using large cables to power them and communicate with pilots above the surface. However, the length of this cable limits the ROV’s scope of exploration. Besides, Wi-Fi may not reach underwater, but light can still travel underwater. Thus, Li-Fi from an embedded lamp underwater could solve these problems and allow more freedom in exploration. Further, headlamps would even allow multiple cross ROV communications to share information. This may be useful in underwater military stealth operations.

Since Li-Fi technology only utilizes the visible light spectrum it won’t interfere with other radio frequency using devices. So Li-Fi is prime for places where Wi-Fi is banned. For example, nuclear power plants require contained and interconnected systems to monitor the integrity and health of the facility. Other forms of radiation may be harmful to the operation of such systems, so Li-Fi is a good, cost-efficient choice. Similarly, in medical field, hospitals contain a lot of monitoring equipment that utilize radiation. It could harm a patient’s health if Wi-Fi usage along with its radiation interferes with the equipment. Li-Fi would be able to contain internet within surgery rooms and with equipment near the patients, so other people’s Wi-Fi usage wouldn’t become a problem.

As the the Internet of Things increases every year (currently 80 billion), current Wi-Fi transmission rates cannot keep up. Likewise, the RF spectrum is increasingly burdened. We have found a new solace in Li-Fi that can utilize the current infrastructure of LED lights in lamps, ceiling lights, etc. Moreover, solar cells can act as receivers of this visual light data. By adding microchips to devices which include solar cell like parts, Li-Fi networks can be activated. All these can soon become reality with Li-Fi routers that are currently in the works. The opportunities are endless for Li-Fi and can address our changing data needs in the future. In an upcoming article, we will discuss the usage of LEDs in indoor navigation systems for the visually impaired.

Did you know FindLight has a vast collection of LEDs, LED drivers, and PIN photodiodes?