You have probably heard of UV disinfecting and have also probably seen some commercial products readily available in the market. But do you know how they work? How they produce the UV rays and whether they are effective against potent pathogens such as Covid-19. We discuss all this in today’s blog post.

If you are old and lucky enough to live in one of the sunny parts of the world you have probably gotten at least one sunburn in your life? This is the effect of a specific range of electromagnetic radiation called ultraviolet light (UV) emitted from the Sun. It can be incredibly harmful to humans or any other living organism without the right protection. The Sun releases three different types of UV radiation: UVA, UVB, and UVC. UVA and UVB are most commonly known to cause sunburns and skin cancer as UVC is filtered out by the atmosphere. 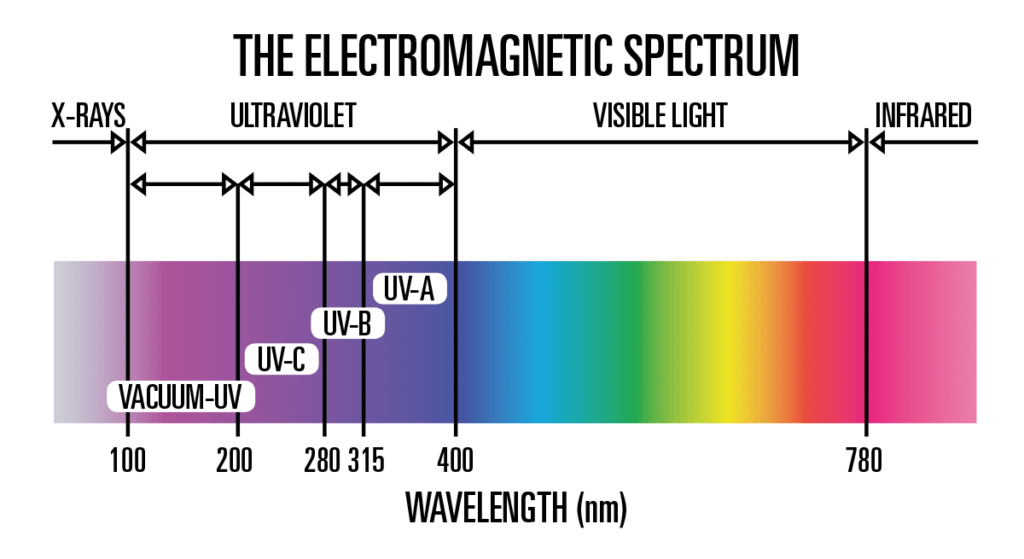 Visible and UV light range with their respective wavelengths. Image courtesy of We UVCare

By understanding and harnessing the damaging nature of these rays we can use them productively. More specifically, we can reproduce this UV light to a certain degree and target specific molecules in a DNA causing it to break apart. As you might know DNA molecules are the building blocks of all living organisms carrying the genetic code for growth, development, functioning, and reproduction of all known organisms. Therefore, if we are successful in altering the DNA through UV radiation, we can use it to destroy unwanted bacteria and disinfect various surfaces on which they might reside.

How Does UV Light Kill Bacteria?

In 1877, scientists Arthur Downes and Thomas P. Blunt made a shocking discovery. Two different test tubes were placed outside for several months, one in the shade and the other exposed to the sun. They observed that the sample left in the shade was muggy, which was a clear indication that it had bacteria growing in it. In contrast, the unprotected sample in the sun was completely transparent. It became clear that UV light was curbing bacterial growth.

UV light is considered to be in the wavelength range of 100-400 nm. This region is composed of high-energy electromagnetic radiation and it can be harmful to DNA. Inside the body or bacteria are thymine molecules attached to DNA strands. UV light has the ability to break these chains apart and completely alter the DNA. At shorter wavelengths (high photon energies), UV light can cause significant damage to the DNA of microscopic germs. Once damaged, the cells are unable to reproduce in a host or on a surface and are considered dead.

In order to kill specific germs, the wavelength must be in the range of 200-300 nm, with a peak effectiveness at 260 nm. At this specific wavelength, the nucleic acids absorb the most radiation that transfers directly to the conjugated double bonds of purine and pyrimidine rings. Furthermore, the dose of light needs to be sufficient, this is the intensity multiplied by the total contact time. Importantly, the radiation must be in contact with the area of disinfection as any material blocking the bacteria will shield the effects of the UV disinfecting process. 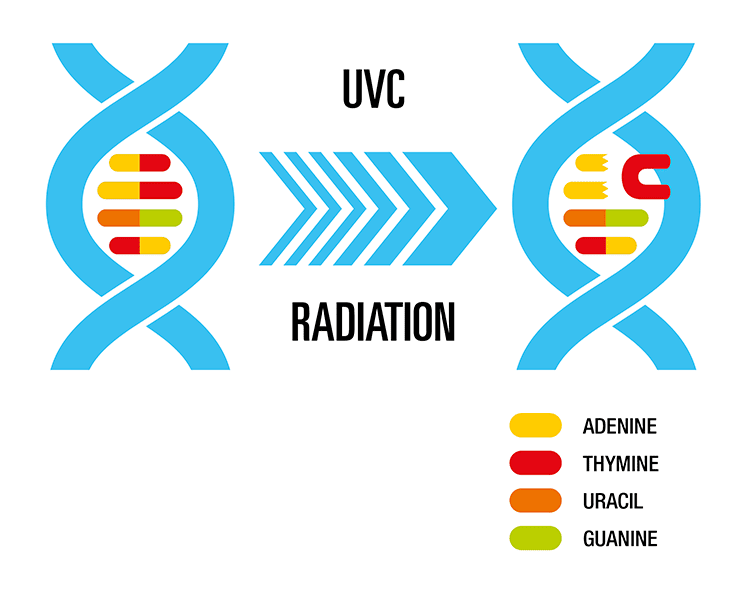 How UV light breaks apart DNA by dislocating the thymine bonds. Image courtesy of We UVCare

How to Produce UV Rays

One way to generate UVC radiation is by using mercury lamps. The common method is to electrolyze gas (typically mercury) inside a tube so that the released energy is in the form of UV light. Incased around the gas is a pure quartz tube. Pure quartz is used because it is primarily made out of silicon dioxide, which is transparent to UV light, whereas glass is only partially silicon dioxide. However, mercury can be dangerous and hard to dispose of, creating a hazard to transporters and consumers.

So scientists are searching for other ways to create UV light and one alternative might be Krypton-Chlorine. Using the same gas properties of mercury, they can create UV light that has a peak effectiveness of 222 nm. Many of these UV light sources are now readily available in the market through various companies (see for instance on FindLight here). 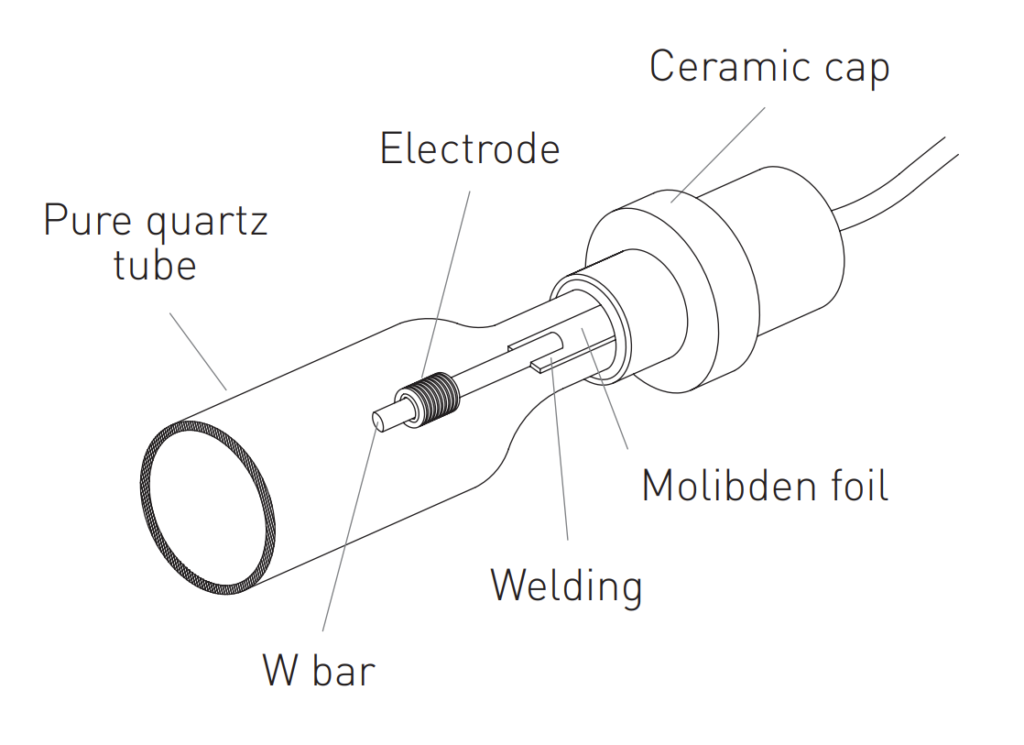 Covid-19 has sparked some new real applications for this technology. Researchers at National Institute of Standards and Technology are close to developing a UV light emitter to kill Covid virus on any surface or state. They tested the light fixture on a mimic saliva base and then dried droplets on a steel surface to imitate sneezes or coughs. At least 90% of the Covid germs must be eliminated on any surface for the technology to be considered successful.

This machine is designed to output the desired wavelength to kill Covid-19. Image courtesy of optics optics.org

The group is testing this theory by first precisely producing the desired frequency to expose the virus. In their design they use as few mirrors as possible to preserve the power, polarization and other properties of light. They found that the optimal wavelength to kill the virus is in the area range of 222 nm to 280 nm. Additionally, when the virus was placed in the saliva mixture made up of protein, salts, and various materials, the strength of the effective UV ray was reduced significantly as the light was shielded or absorbed by the substance. 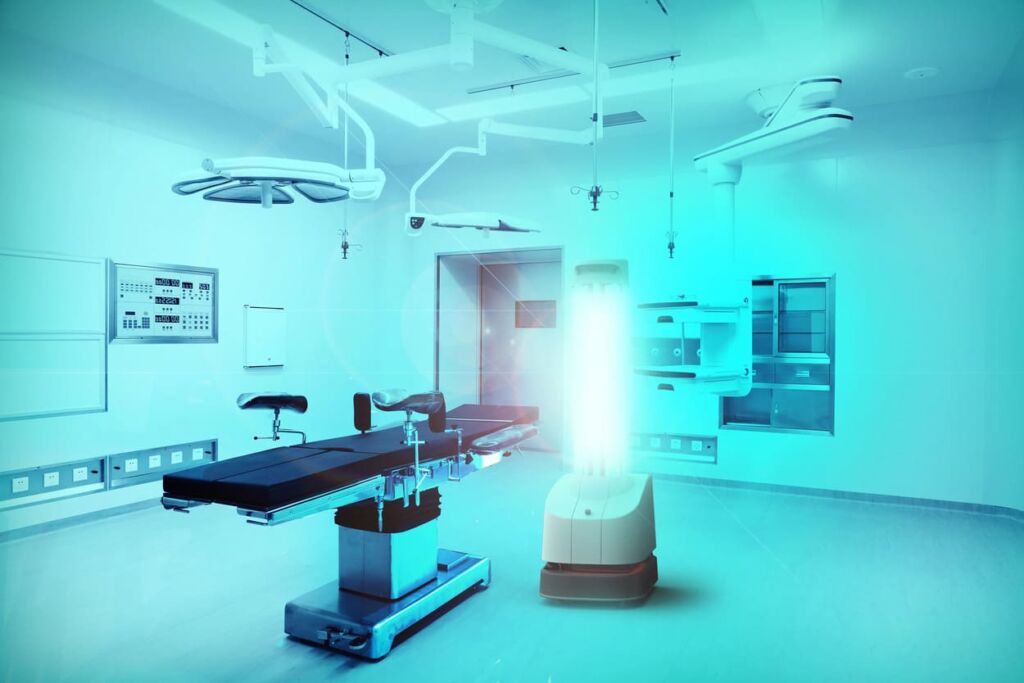 UVC has proved that it can wipe out 30% of superbugs. Some hospitals use robots to disinfect entire rooms. Those robots move around the space to every corner and shadow illuminating with UV radiation. They are autonomous and move at a slow pace ensuring that the surface has been thoroughly cleaned to move on to the next area. The Henry Ford Hospital has already incorporated many of these robots into their daily routine. They seem to have adapted well to the hospital room as many have reported that it has made cleaning more efficient.

The utility of UV disinfecting machines has now been established in hospital settings but do we know how well the commercially available, at-home-use UV disinfecting products work? Turns out, most at-home UV sterilization products are not sufficient to kill the number of germs that they advertise. As we saw from the above discussion, the choice of the specific wavelength the intensity, and the distance of the radiation are critical for the successful elimination of bacteria. To achieve a meaningful degree of sterilization, it is critically important to achieving a high degree of elimination of bacteria, which is typically in the 90’s %.

Researchers at the University of New Hampshire conducted a test of these products that claimed to kill up to 99.9% of germs. However, only less than 50% of them were eliminated from the surface. They are simply not powerful enough to clean the entire surface. Scientists really emphasize the wavelength, time, and distance of the light source that the bacteria is exposed to.

No question, UV disinfecting techniques have a lot of benefits: they do not leave a by-product; they are smaller instruments that might be cheaper than a traditional cleaning machine; they can clean food without any alterations to taste; and they do not need to transport dangerous chemicals from one location to another. UV radiation can also be superior to chemical cleaning since pathogens can often mutate and obtain a level of immunity to disinfecting agents such as chlorine. In contrast, UV light is omnipotent on all mutated DNA molecules.

The downsides of UV disinfecting devices are also important, considering that UV light can also be harmful to humans. Though it seems that most industries use robots and protective shields to prevent any humans from getting exposed. Another big downside is that UV light is only effective in the line of sight. Hence any obstructions will prevent areas from being entirely disinfected. Even with these downsides, UV light has its solid place in the future of disinfecting surfaces in various settings.

interesting and educational Thank you