Laser Beam Analysis for Improving the Results of LASIK 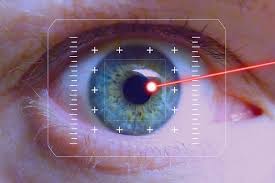 Understanding the emergence of New Developments

Laser eye surgeries such as LASIK are used to treat a number of eye conditions including retinal tears and detachments, macular degeneration, and glaucoma. Doctors will sometimes use laser eye surgery in place of more commonly used methods for correcting vision. However, in many cases, laser eye surgery might be the only way to correct one’s vision. Scientist have recently worked on new ways of deciding how to use lasers and what types of features of lasers should be used in these surgeries, either to minimize the side effects or to improve the success rate of such procedures. This includes using entirely new technologies for laser eye surgeries and better utilizing the existing ones.

The new Carl Zeiss Medtic Visumax Laser. It was developed for many different types of vision correction procedures. Image courtesy of manhattanlasikcenter.com.

Laser surgeries have seen tremendous progress in success rates over the recent years. This success is largely due to the development of novel laser technologies that were not available for commercial use less than a decade ago. The two main types of lasers us in the market are excimer and ultrafast (femtosecond) lasers. The former of these two represents a more mature technology but has seen significant improvements on the engineering front over the past several years. Excimer lasers have revolutionized this field in particular by improving the safety, efficacy, and predictability of different surgeries. This includes procedures like corneal refractive surgery whereby these lasers can remove or “ablate” microscopic amounts of tissue from the cornea.

Excimer lasers are capable of producing high-energy pulses in the ultraviolet part of the light spectrum that only penetrate a tiny amount of the cornea at a time and remove only a small amount of tissue. This allows for very precise corneal shaping with minimal collateral damage. Moreover, many of the modern excimer based medical laser systems have automated eye-tracking systems to monitor eye movements to keep them on target during surgery. This allows for non-contact procedure further reducing post-operative discomfort and the recovery period. These lasers are currently the standard of care for various corrective procedures to address a number of vision disorders including nearsightedness, farsightedness, and astigmatism. 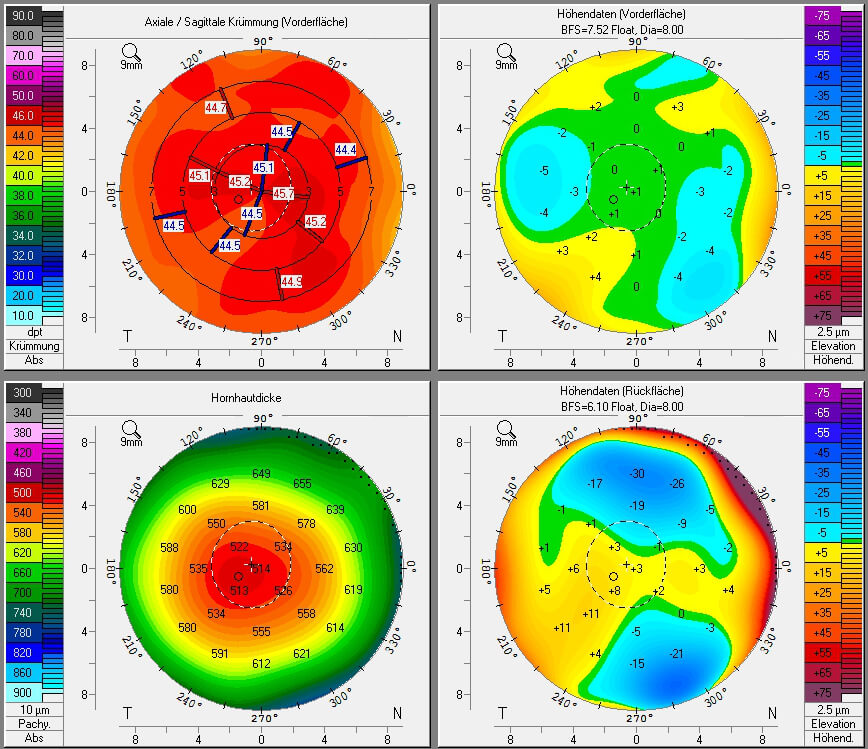 New developments with different types of lasers will allow surgeons to better understand exactly where the issues in a patients eyes are. The image above depicts a mapping of a patients corneal topography to create a heat map of a patients cornea for raised surface areas and inconsistencies. Surgeons will use these new lasers in procedures such as photorefractive keratectomy. Image courtesy of wikipedia.org.

Ultrafast lasers are a relatively new occurrence in commercial markets although the technology was first developed in late 80’s and early 90’s. Femtosecond lasers – a subset of ultrafast lasers with a sub-ps pulse durations offer a number of advantages over longer pulse duration systems such as Excimer systems. These lasers can emit light pulses with pulse durations as short as 10^-15 s at near IR side of the optical spectrum. The shortness of the pulses is a major advantage as they operate with a fundamentally different process on incident tissues. A process dubbed as cavitation (bubbling) is the primary mechanism that creates microscopy expansions though shockwaves in the tissue enabling shaping with microscopic precision.

Enabled with the engineering advances over the past years that allowed the development of robust ultrafast systems that could withstand the demands of surgical field, this new technology is a strong rival for a number of ophthalmic pathologies. Dr. Ronald Kurtz pioneered its use in the University of Michigan in the early 1990’s.  Since then many surgeons have found this as a viable alternative for performing surgeries more easily and accurately.

It will be difficult to underestimate the role numerical studies have played in the advancement of laser technologies for ophthalmic surgeries. There have been several important mathematical methods that have stood out for achieving optimum laser beam characteristics for performing these different procedures. This includes such components and methods as super Gaussian order, truncation radius, spot geometry, spot overlap, and lattice geometry.

The super Gaussian order mentioned above has gained a lot of interest recently by many engineers and researchers for determining the optimum laser beam characteristics. In an article recently published on PubMed, and on IOVS there was a big discussion about using the super Gaussian Order to develop a theoretical beam profile following the Lamber-Beer model. Researchers were able to use this model and measurements from excimer lasers and beam profiler cameras and other mathematical methods to understand how rough the ablations would be. As a result, engineers were able to develop better lasers for performing various types of vision correction and eye disease procedures.

Beyond the Standard Care: Challenging Pathologies

Although engineers and researchers developed many of these lasers for commonly needed laser eye surgeries, the technology is proving to be nimble enough to treat rather complex pathologies. One example of this the NIDEK Advanced EC-5000 NAVEX Laser, which comes with a corneal topography system to guide the laser. This and other similar systems are critical for treating patients with thinner corneas.

The Future will be Bright and Clear

The use of lasers in ophthalmology is no longer a rare occurrence. It is a standard of care for treating various ophthalmic disorders. Ailments that were the cause of lifelong blindness just a few decades ago are now address with swift treatment in outpatient care. The engineering advances are also bringing newer and newer technologies to the market that were confined within the walls of research labs just a few years ago. Paired with rampant computational power this is and will bring the standard of care to new heights.

About FindLight: FindLight was established in 2014 with a clear vision to create a unifying platform for the suppliers and consumers of photonic technologies. Over the past 5 years it has grown to become one of the leading platforms for the photonics industry to connect and enable the photonics community to lead the technological revolution we enjoy today.