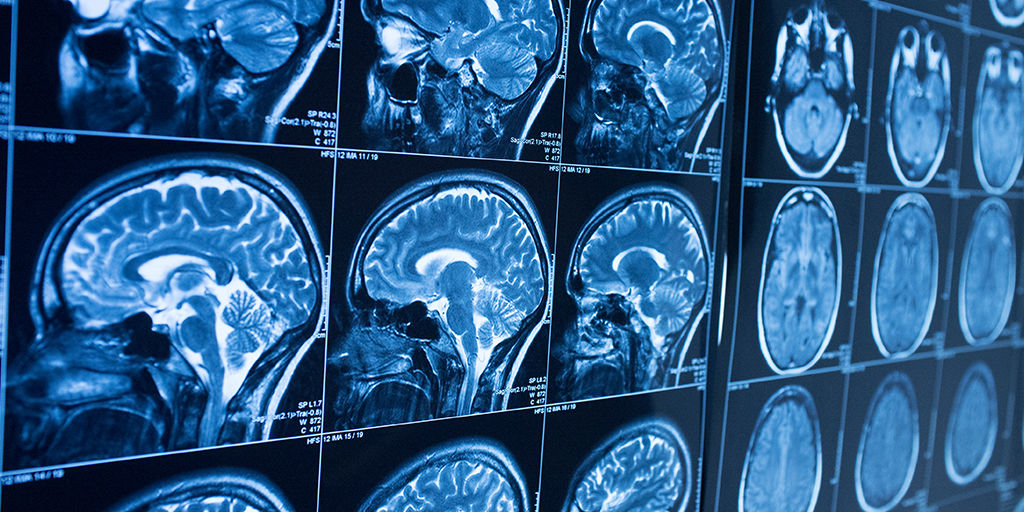 As discussed in a recent article, strokes are one of the most common causes of death in the world. One study found that about 90% of all strokes occur due to cerebral ischemia while the remaining 10% are hemorrhagic. The former is insufficient blood flow to the brain and the latter involves bleeding in the brain. It is critical that patients who suffer a stroke receive treatment quickly after exhibiting symptoms. Before treatment, however, physicians must determine the type of stroke. Treating a patient with a brain bleed for a cerebral ischemia could significantly worsen their condition.

There is clear incentive to devise a fast and accurate method for ischemic stroke identification. Many hospitals in the United States and Germany have benefited from a mobile unit that uses x-ray computed tomography scanning. Now researchers look to develop a compact, inexpensive, portable device that can detect indicators of a ischemic stroke at emergency sites.  A research team with the Institute of Fluid Physics and Department of Neurosurgery of Southwest Hospital published their proposal in the June issue of AIP Advances. Their near-infrared system is a novel hybrid method combining two popular light measurement techniques.

Their device is unique in that it features a continuous-wave (CW) laser diode with a long coherence length in addition to the three diode sources of various wavelengths. The long coherence source allows the user to acquire different measurements simultaneously. This significantly reduces the time it takes for diagnosis, ultimately minimizing the time between stroke and treatment.

The schematic for the device including the sources for both the DCS and NIR-DOS systems. Courtesy of AIP Advances.

The NIRS-DOS portion of the hybrid device consists of three laser diodes of different wavelengths at 690nm, 808nm, and 830nm; the DCS portion contains the long-coherence diode with wavelength 785nm. An optical switch with frequency .2 Hz switches between each source, and corresponding single-photon avalanche photodiodes detect light reemitted from the patient’s tissue. Output from the detectors feeds in to custom-built software which calculates the optical intensity and normalized autocorrelation value.

The device is relatively straight-forward and easy to use. Above we see the experimental setup. Courtesy of Phys.org.

The research team tested device performance on human subjects sitting comfortably with their forearm placed on their leg. The probe with embedded light sources was strapped around the forearm and an arm cuff was secured around the bicep. A black cloth ensured external light did not interfere with the probe. The researchers acquired baseline data for three minutes before inflating the cuff to cut off circulation. They kept the cuff inflated for another three minutes and then collected post-occlusion data. By cutting off blood flow during the occlusion stage the researchers are able to mimic signs of an ischemic stroke.

Analysis Methods for the NIR-DOS and DCS Systems

The NIR-DOS system  focuses on determining the effective attenuation coefficient, μeff. μeff describes how scattered light attenuates in the tissue, and it is therefore a key indicator of total concentration of hemoglobin and tissue oxygen saturation. The attenuation coefficient is dependent on the absorption coefficient (μa) and the separation between the source and detector (ρ) as well as determinable constants. The full equation is written as

DCS measures temporal speckle fluctuations due to red blood cells in the tissue; data from the long coherency source can therefore provide an estimate of the blood flow index. This is done by measuring the autocorrelation value of the optical intensity using diffuse correlation theory. The research team includes a software correlator into their device which samples the photon count to calculate the intensity as well as its normalized autocorrection value.  These calculations are made in real-time using a computer with an integration time of .05 seconds. 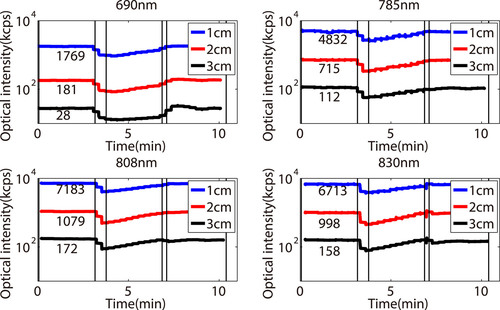 Plots of the optical intensity for each source and source-detector separation. Couresty of AIP Advances.

The researchers monitored optical intensity through all three phases of the experiment: baseline, occlusion, and post-occlusion. The above data represents intensity at different source-detector separations (ρ) for each source wavelength. As expected, intensities are stable during the baseline period before decreasing as the cuff cuts off circulation. Optical intensity then increases and finally stabilizes as the cuff is released and blood flow returns to normal. The team then used the intensity decay over different ρ values to to obtain μeff and ultimately determine HbT and StO2; results for the given subject were .08 mmol/L and 63%, respectively.

The researchers created normalized autocorrelation curves for normal and “ischemic” tissue with data from their baseline and occlusion stages of their experiment.  As expected, the correlation curve delay is significantly slower during occlusion than it is for normal conditions. The team used these values to determine blood flow index for each source-detector distance. During occlusion BFI decreased by 24%, 15%, and 10% for a mean decrease of 16%. BFI then experiences a overshot increase once the cuff is released.

The collaborative team from the Institute of Fluid Physics and Department of Neurosurgery of Southwest Hospital present a successful hybrid of NIR-DOS and DCS techniques for stroke diagnosis. Theirs is the first capable of directly measuring blood flow while simultaneously measuring blood volume and oxygenation. Values obtained through their method via the arm cuff experiment also agree with estimates from previous studies. The device has great potential application in emergency stroke diagnosis as it is portable, easy to use, inexpensive, and extremely sensitive to hemodynamic changes. Time is extremely valuable following the first symptoms of a stroke. The near-IR hybrid diffuse optical device could greatly cut down on diagnosis time to expedite treatment and save lives.

For more on the device, experiment, and methods, find the proposal here.