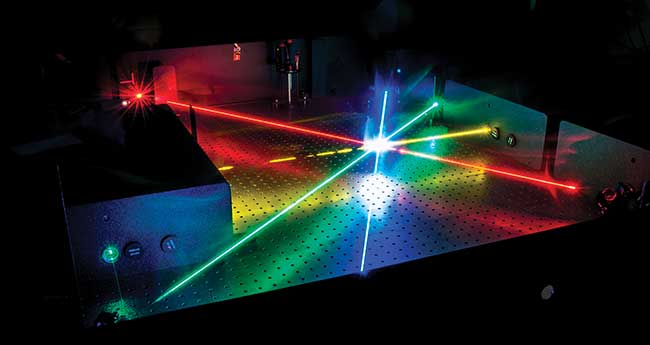 Nanophotonics studies the behavior of light on the nanometer scale, and the interaction of nanometer-scale objects with light. It can lead to many great developments including optical parametric oscillator (OPO) technology, such as that depicted above. Image courtesy of Holger Kock/Fraunhofer Institute for Physical Measurement Techniques (IPM) and photonics.com.

An Introduction to Nanophotonics: Something Big from Something Small

In recent years there has been a lot of work with nanophotonics in optical physics and engineering. This is a part of the rising popularity into research towards nanotechnology. Nanotechnology is an area of science that studies the interaction of light with nanostructures or a structure that is of intermediate size between microscopic and molecular structures. Semiconductor devices are a common example of a nanostructure. However, due to the small size of these structures, their optical, electronic, structural, thermal, and mechanical properties are deeply interdependent. Many researchers believe that this technology will undergo big changes especially in the next 10 years. Furthermore, nanophotonics might be involved with future applications that rely on the ability to integrate technologies on a chip to augment them and/or allow them to interact with other signals. This includes computers, communication systems, and signal processing equipment. 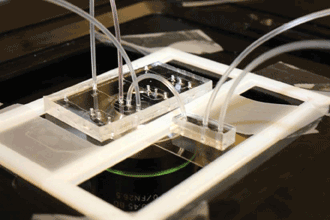 Working with sheets of gold is one popular area of research with nanophotonics. This is because sticking together gold nanoparticles chemically with precise sub nanometer gaps offers a new way to trap light into volumes much smaller than their wavelength. Image courtesy of photonics.com.

The history behind nanophotonics is a long one with multiple components. This story truly began with the beginnings of optics when the Egyptians and Mesopotamians developed lenses. Later on, the ancient Greek philosophers developed theories on light and vision bringing about further key aspects of optical science. However, nanophotonics itself would not exist without photonics, which deals with the generation, detection, and manipulation of photons. It is an area of research that sprang from the invention of the laser and fibre optics in the 1960s. Due to more recent developments with devices such as optical fibers, the internet, and smartphones, nanophotonics became a natural emergence. Soon enough, many scientists, engineers, and researchers wanted to work in nanophotonics.

Many universities throughout the world have dedicated a great deal of time towards nanophotonics research. Dr. Tuan Vo-Dinh, the director of the Fitzpatrick Institute for Photonics and professor of biomedical engineering and chemistry at Duke University, has worked in this area because of the potential applications it may offer for fabricating different materials. This is particularly important since nanoscale fabricated materials display some intriguing properties when they interact with light.

Vo-Dinh has worked in this area by investigating plasmonics-active nano materials and nanosensing technologies for over three decades. He was the first individual to report the general applicability of surface-enhanced Raman scattering (SERS) as an analytical technique relevant to many chemicals. This occurred just after many other groups observed SERS. Over the years, his laboratory has made many great scientific contributions. Some examples of this include nanobiosensors capable of probing physiological parameters (pH) and detecting individual biochemical species (DNA adducts). These nanosensors can detect diseases much earlier than other sensors and help with understanding the life process of cells. 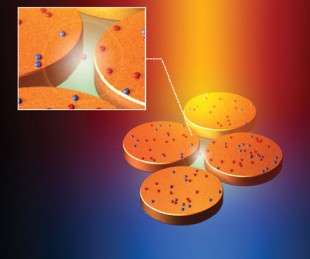 An example of a nanophotonics sensor. This particular example is a molecular sensor developed at Rice University. Image courtesy of Rice University and phys.org.

Research at Other Universities

However, Vo Dinh is certainly not the only nanophotonics researcher to receive great attention. Just last year, physicists at the U.S. Naval Research Laboratory (NRL) conducted research into using nanophotonics for improved optical efficiency. Their work demonstrated the means to improve the optical loss characteristics and transmission efficiency of hexagonal boron nitride devices. This would enable very small lasers and nanoscale optics that many researchers have sought to create.

Some examples of this include ultra-high resolution microscopes, solar energy harvesting, and targeted medical therapies. Furthermore, the efficiency limitations of nanophotonics can be overcome by carefully engineering isotopes in polar semiconductors and dielectric materials. This results in a dramatic reduction in optical losses, presenting what might be the most promising source for the next generation of materials and devices.

Even though there are many applications for nanophotonics, some areas of research have received more attention than others. Many scientists feel that the 21st century will be when photonics and nanotechnology will properly merge together into nanophotonics.

Quantum optics and plasmonics are two highly interconnected areas that have received a lot of attention. A lot of this has to do with the fact that molecular factory processes and nanofabrication have led to the development of species, materials, and products at the nanometer scale. Quantum dots is a more specific example of something in this area since quantum effects begin to dominate further down the nanoscale. This can lead to very pure colors and high-clarity displays, possibly leading to better imaging of biological objects and drastic advances in quantum optics and quantum information communications and processing.

Nanophotonics might also become more involved with work in electromagnetic enhancements, possibly leading to better medical diagnostics and more efficient thin-film solar cells. However, the work with photonics chips might be the most important. The scientists at CUDOS ARC Centre of Excellence in the School of Physics and the Sydney Nanoscience Hub at the University of Sydney demonstrate this. These scientists and others have spent time towards developing a computer chip that will essentially put the entire optical network in a chip the size of a human thumbnail. This may allow engineers to process light power in a way that the energy can be readily integrated into common pieces of technology like smart devices. This will lead to better information processing with many devices.

In the end, with all of these different applications, one definitive commonality exists. Nanophotonics will be a widespread area of research moving forward.

Are there any companies working with nanotechnology now.

We’re able to dope nanoparticles with various element atoms and create LEDS. We use the same process on biocompatible nanoparticles that we can energize to emit various wavelengths. We can energize those nanoparticles when in the body to work in conjunction with an photosensitizing drug to kill certain pathogens. We are working our way down to ionized radiation to the cell level. Hope that answers your question