High power lasers are used in the industry routinely for cutting, drilling, and micromachining materials. They have also found applications in medicine where tissue needs to be cut or heated. The need for higher power lasers has seemed to increase steadily over the years. Diode lasers, which are usually used for low power applications, seem to give reasonable output powers when used as a diode laser array. They have found applications in medicine where moderate output powers are required. This article will discuss the structure and process for getting high powers in laser diode arrays, with novel applications in spectral combining and parallel optical links.

Typical single mode VCSEL laser output is on the order of a few milliwatts. For telecommunication applications, this would suffice. However for high power applications, the power output of the laser must be orders of magnitude higher. It is hard to reach such magnitudes from a single VCSEL as there is simply not enough current density and efficiency in conversion that can be achieved. Instead, the output of many VCSELs are combined and collimated to give a high power collimated beam. Output of 230 W has been demonstrated using such arrays. The image below shows such a stack focused using a microlens array. 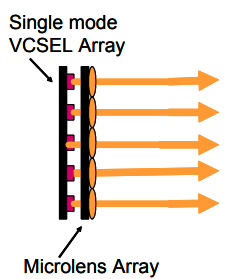 Patterning and layer deposition can be done by techniques such as molecular beam epitaxy (MBE) where the thickness of each layer is controlled. The image below shows the various steps that go into the processing of VCSELs. While making devices for high power applications, an array of lasers is cut together instead of individual pieces. Care must be taken to place proper heat sinks to drain away the excess heat generated from these devices. 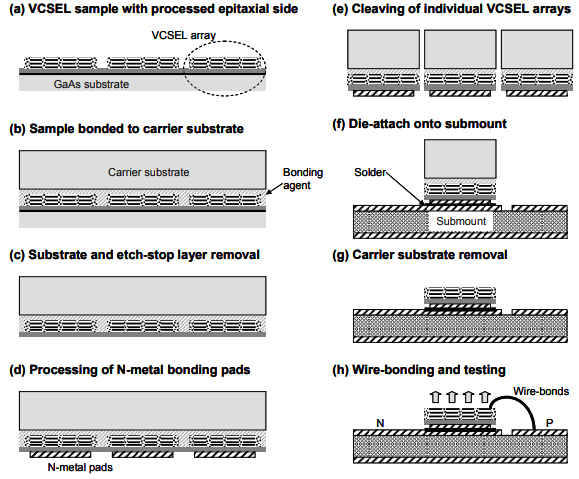 Fabrication, cleaving, testing of individual VCSELS. For laser arrays, a set of lasers are cleaved together instead of individual ones. Courtesy of Springer.

While edge emitters do not have superior spectral qualities as the VCSELs, individual devices can give higher output powers as the gain interaction length is longer and operation can be multi-mode thus enabling more power to be guided in the cavity. Because of this reason, higher energies maybe obtained, but the reliability and yield factors remain an obstacle. The schematic below show how an edge emitting laser diode array can be formed by a sequence of stacks. 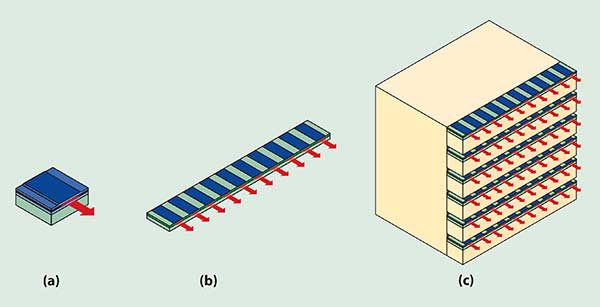 Usually an external lens is used to focus the individual output beams to create a single high power output beam.

Schematic for combining the individual laser beams to form to a single high power output beam.

The high power laser market is dominated by solid-state and gas lasers. High power laser diode array can be coupled into fiber optics to be used for medical applications. However, apart from competing with solid state lasers, the novel structure of many laser diodes in an array opens up some unique applications. 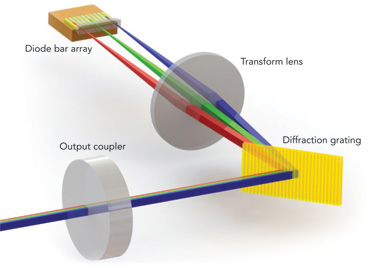 The lens focuses the individual beams to a single spot on the diffraction grating. Then based on the correct angular position of the grating, the beams will diffract into a single beam. The beams combined this way not only have a high output power but also have a range of frequencies that can be useful in spectroscopy. For example, in infrared spectroscopy to probe molecules, a set of frequencies can be used to observe the various absorption wavelengths simultaneously. Quantum cascade laser (QCL) based laser diode array has been used to obtain the absorption spectrum of isopropanol even from a distance of a few meters.

Optical fiber links use VCSELs that can be modulated at tens of GHz for sending bits of information down the core. Increasing the speed of a single VCSEL is harder and thus speeds above 40 GHz or so are hard to obtain. Developing parallel optical links solves this problem. 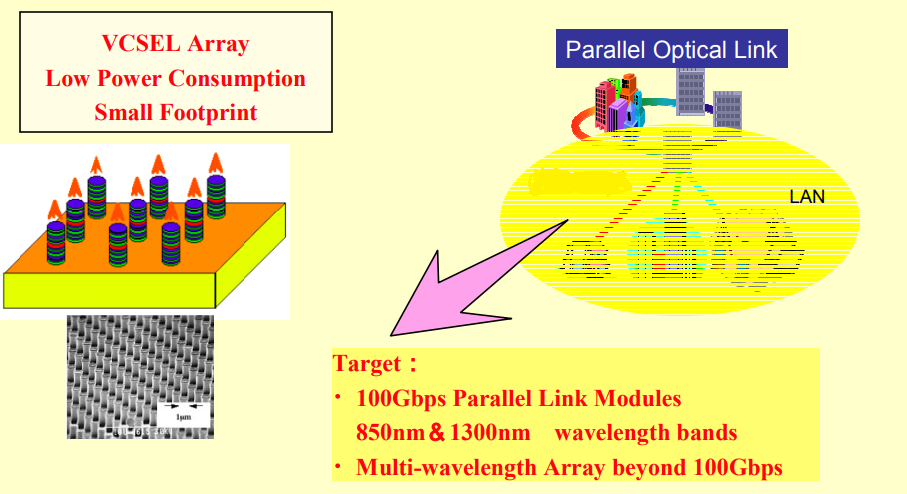 Use of parallel optical link modules in LAN. Data transfer at 100 Gbps or greater can be achieved.

In such modules, the data is split among many fibers rather than one. This way data transport of 100 Gbps and higher can be obtained. Applications of laser diode array modules with parallel optical links have been proposed for fast automatic data collection from particle accelerator experiments in CERN. A huge number of data points is collected each second and stored to be processed later. Fiber optic cables in a parallel network can provide the necessary speeds for collecting data.

Check out FindLight’s collection of diode pumped solid state lasers, fiber lasers, VCSELs, and fiber coupled diode lasers to use in your applications.

Most popular
Laser Cooling: A Future for Cryogenics Without Liquid Coolants
The Importance of LiDAR in Self-Driving Cars
Medical Lasers: A Guide to Various Effects and Choices
Prism Types and their Applications in Optical Systems
Optical Frequency Combs for Molecular Fingerprinting
Three Things to Consider When Choosing an Optical Mount
Lasers in Ophthalmology: The Future is Clear
Fiber Optics’ Exciting New Role in Renewable Energy
Surface Emitting Lasers: Types and Applications in Sensing
Laser Tissue Interactions: Biological Factors to Consider for Dermatology