Human beings have suffered from kidney stone problems since 7000 BC. Despite advances in treatment, incidence of renal stone disorder has increased over the past few decades. Lasers have been used to remedy this disease since the first discovery of Ruby laser. Unfortunately, Ruby laser faced challenges in this area since its pulse power was not controllable. CO2 lasers were also used, but were not successful either because they lacked a fiber optic delivery system. Solid-state lasers came to the rescue with Q-switched Nd:YAG lasers offering pulse control and fiber optic delivery methods. More specifically, Holmium lasers gave superior performance with a high success rate about patients, making it the preferred laser for lithotripsy – the process by which kidney stones are broken into small enough particles that can pass through with urine.

Ho:YAG lasers consist of rare-earth Holmium ions doped in a YAG crystal. As it turns out, Holmium lasers are very effective in their energy delivery as they can be tuned to water absorption wavelengths. Since water is the predominant molecule in the human body, Holmium lasers find their uses across various medical fields. In particular, they have been used for heating and cutting tissues effectively.

In this article we will discuss the characteristics of Holmium lasers; their use in lithotripsy; how it compares with other laser lithotripsy methods; and its applications in other areas within Urology.

Lithotripsy is the breakdown and removal of stones in the urinary tract. The stones are commonly composed of uric acid, magnesium ammonium phosphate, and calcium oxalate, along with water. The details of the lithotripsy procedure are decided based on the location of the stone in the tract, its size, and whether the patient has had previous obstructions or not. If obstructions are present external shockwave therapy can be used. But we will not discuss this particular method in this blog post. Instead we will look at the lithotripsy with the help of fiber optic cables. 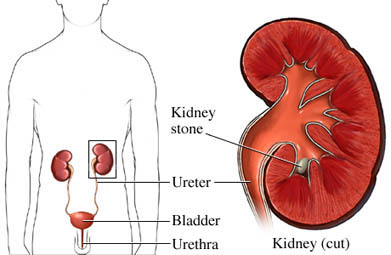 Holmium laser operates at 2100 nm in the near infrared spectrum. Operation is in the pulsed mode for lithotripsy applications. The common pulse durations range from 250 to 350 us, and pulse energies in 0.2-5 J/pulse. The pulse frequency is within 50 Hz, and average power delivered to the stone is 2-100 W. This depends on the size of the stone in the urinary tract.

The laser fiber diameters also vary between 200 um and 1 mm. Bigger fibers are more useful to breakdown larger stones. Most of its heating properties come from its strong interaction with water molecules. In fact, Holmium lasers have an absorption coefficient of 40 cm-1 in human tissue. In water, 95% of the energy is absorbed within 0.5 mm. As tissue is composed mainly of water, not much energy is lost by scattering or transmission, and most of the energy is absorbed by the water molecules.

For thermal interactions, longer pulse widths are used. Ho:YAG are usually operated at pulse durations longer than 200 us. Interestingly, thermal interactions induce thermochemical reactions that initiate the breakdown of the stones into further components. For example, stones composed of calcium oxalate yielded calcium carbonate. These thermal byproducts can only be created from stone surface temperatures hot enough to initiate thermochemical reactions, such as 100 C to 264 C. Holmium lasers good energy transfer capability helps achieve this relatively easily. The image below shows a fiber optic cable delivering laser energy for lithotripsy. 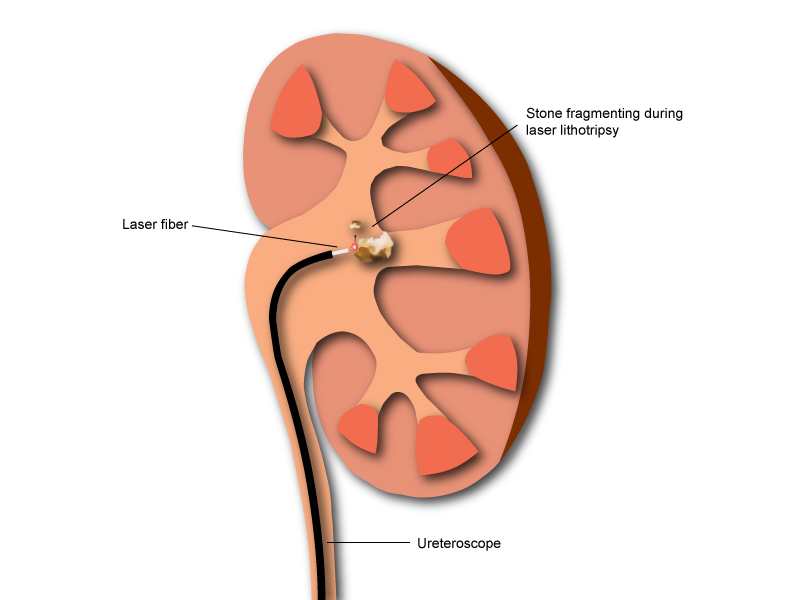 Schematic cross-section of laser delivery for lithotripsy. Courtesy of HarishHospital.

The stone fragmentation happens like a drill as the laser fiber bores into the stone being converted to a dust vapor. Lithotripsy is continued until fragments are smaller than 2 mm. At this size, the fragments pass through easily or are collected and disposed. Since the Holmium laser can cut and ablate tissues if not carefully monitored, the whole process is carefully monitored until completion.

Comparison with Other Lithotripsy Lasers

Another popular laser for lithotripsy is the Q-switched Nd:YAG. The following table compares the performance of these two devices, with the Q-switched version. 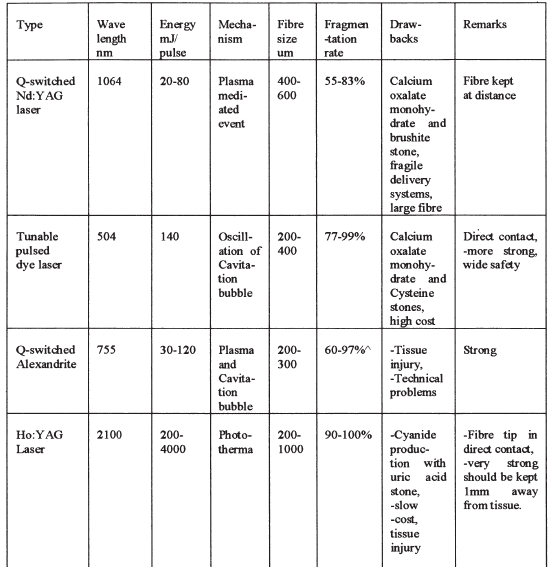 Comparision of Ho:YAG with other lasers for lithotripsy, [1].

It is easy to see why Ho:YAG lasers dominate in comparison as they come close to 100 percent for stone fragmentation. Moreover patient failures are very minimal, with most of them attributed to faulty fiber delivery procedures.

Uses of Holmium Lasers in Urology

Because of its good energy delivery characteristics, Ho:YAG can also be used for cutting and coagulation purposes. Cutting can be used to create incision of strictures and in prostate resection. The table below shows the common pulse characteristics for uses in Urology.

Use of Ho:YAG for various urological procedures, [1].