Laser Cooling: A Future for Cryogenics Without Liquid Coolants

Low temperature physics has helped us produce exotic quantum materials such as superconductors. This usually requires cryogenic fluids such as liquid nitrogen and helium for operation. Recently cooling systems with lasers have been explored for alternative routes to attain low temperatures. Laser cooling has been used to slow down atoms to create “cold atoms”. This has opened up the field of cold atom physics for testing many fundamental ideas in physics. Apart from cooling atoms, cooling solids using lasers can increase the reliability of certain systems that have a poor performance at higher temperatures.

Laser cooling of solids was first demonstrated in 1995 with Ytterbium doped fluoride glass. This led to a flurry of research activity to show cooling in rare-earth doped materials, with temperatures as low as 80 K. This is very attractive for maintaining low temperatures, as laser cooling can be cheaper than using liquid coolant systems, and does not have moving parts or fluids for operation.

In this article, cooling mechanisms in rare-earth doped solids is discussed, with the possible problems in others to be overcome. Optomechanical cooling in nanosystems is also discussed.

Since the first demonstration of laser cooling of solids in 1995, people have demonstrated many solids that can be cooled with temperatures as low as 80 K over time. Most of the effective systems have been rare-earth doped crystals and glasses. The timeline of the discoveries is outlined in the below image. 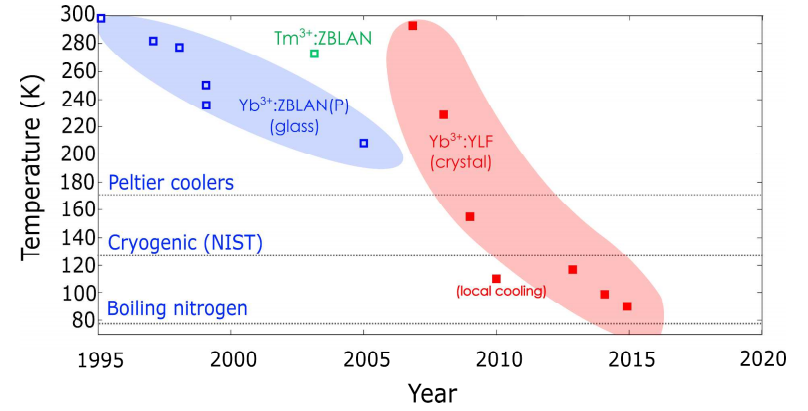 Timeline for rare-earth based cooling. Doped crystals and glass are used for cooling. Courtesy of IOP.

The physics of laser cooling in solids uses the phenomena of anti-Stokes fluorescence. This involves light taking away the thermal energy from the system. In solids, the population of vibrational modes by phonons gives rise to the system’s temperature. Removing the phonons in the high energy modes can lower the temperature of the system. In anti-Stokes fluorescence, the incoming light of lower energy excites the electronic state of the system. The system then absorbs phonons and fluoresces at a higher energy. This takes away the phonons in the system away as light energy. 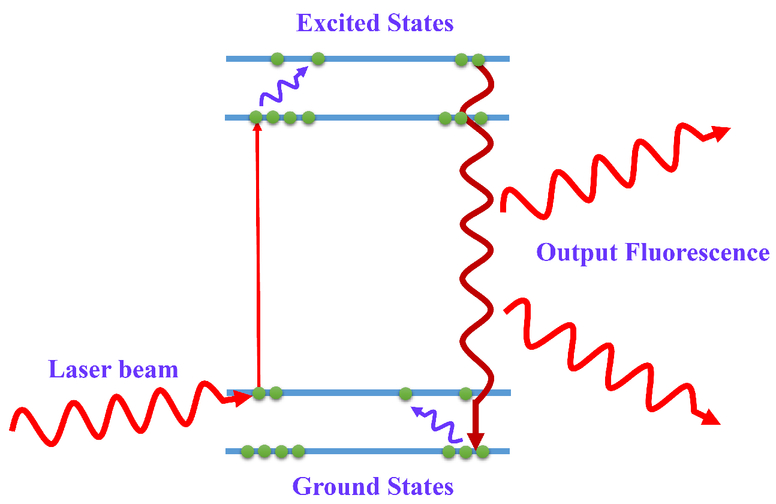 Rare earth doped materials are efficient in this process, because non-radiative recombination is suppressed. Rare-earth elements are known for their electrons in the 4f orbitals being shielded by electrons in the outer orbitals. This suppresses the coupling between the 4f electronic states and the crystal vibrations, hence limiting the ability to emit phonons easily. The efficiency of absorbing phonons increases however by using the incident pump energy lower than the mean fluorescence energy. This way, the process is favorable for phonon extraction, rather than phonon emission. Using this laser cooling, Ytterbium doped fluoride glass has been cooled to 130 K. The setup for the cooling system is shown below. A diode laser tuned to 808 nm is used for this purpose. 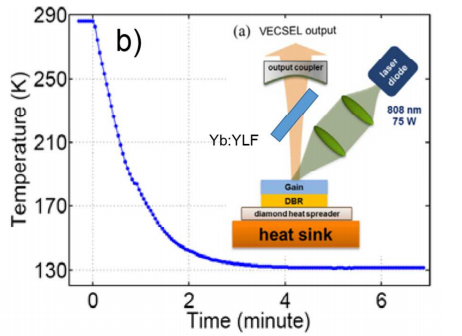 RE based cooling: Here a surface emitting diode laser is used as input beam. Ytterbium doped fluoride glass is the solid cooled. Moderate cooling to 130 K is observed. Courtesy of IOP.

Optomechanical cooling: a) System setup. b) The thermodynamic process in a single oscillation. c) Detuning between the cavity mode and the incoming laser beam. Courtesy of Modern Optics. 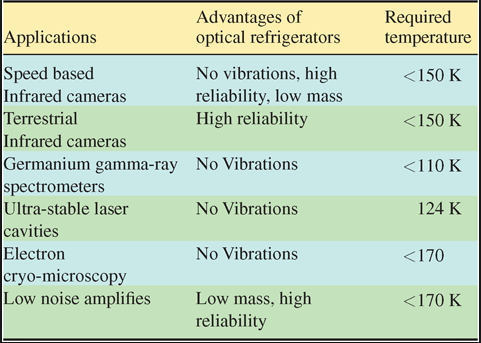 Advantages of laser cooling. The benefits come from reduced vibrations, and increased reliability. Courtesy of IOP.