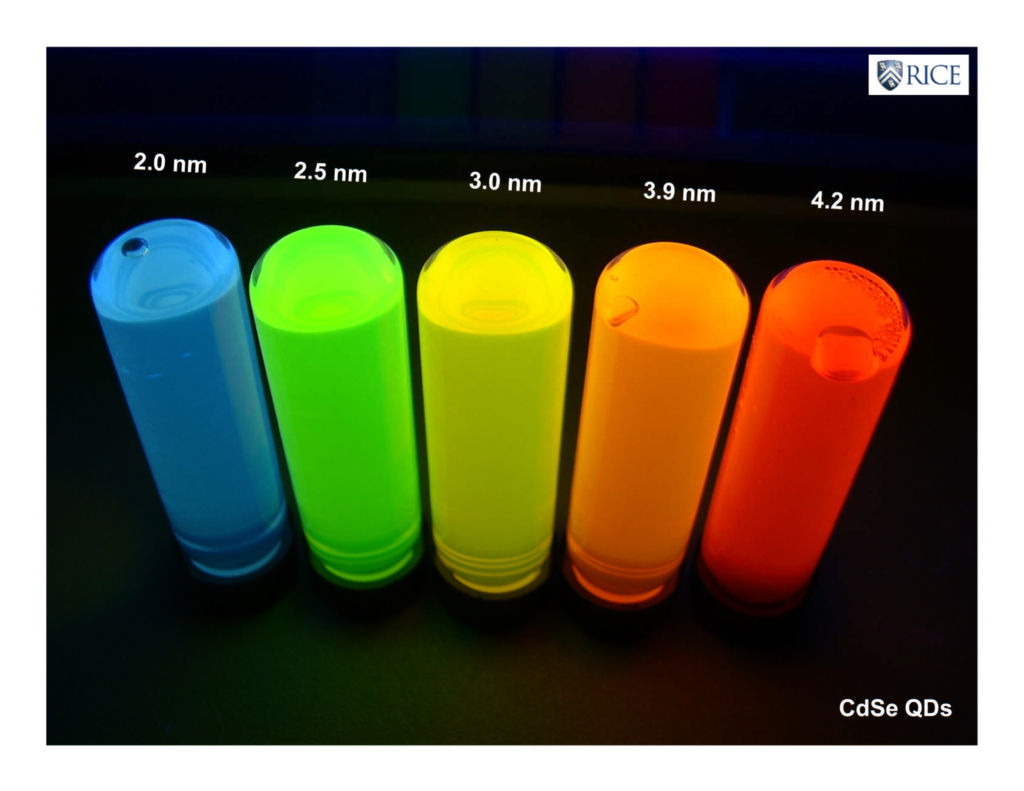 CdSe Quantum Dots of different sizes are contained in these vials. The wavelength of their fluorescence is dependent on the size of the QDs.

If you’ve been in the market for new high-end TV lately, you may have run into what Samsung has coined as the QLED line of displays.  Display manufacturers tout this “state-of-the-art” display technology a rival to LG’s OLED (organic LED) in terms of the color gamut and image quality.  The Q in QLED stands for quantum dots and certainly makes the TVs sound high tech, but what exactly are quantum dots?  And why are they being used in TVs?

Quantum dots (QD) can also be referred to as semiconducting nanocrystals, meaning very tiny semiconductor particles with diameters that can range from a few nanometers to a few hundred nanometers.  Special optical and electrical properties arising from quantum confinement make them unique and appealing for use in a number of applications including micro displays, medical imaging, and lasers.  As the ability to efficiently fabricate QDs with highly tunable sizes has improved, interest in utilizing quantum dot technology has increased tremendously.

The most common type of QDs currently used are called colloidal quantum dots, meaning the QDs are chemically synthesized and suspended in a liquid solution before being applied or deposited for use.  In colloidal synthesis, reactive chemicals are combined in a solution and begin to aggregate as solid particles suspended in the liquid.  This process continues until the particles reach the desired size, at which time the process is halted or stabilized.  After cleaning and purifying the quantum dots, they are transferred to a solution used for applying the QDs to a display or other application. 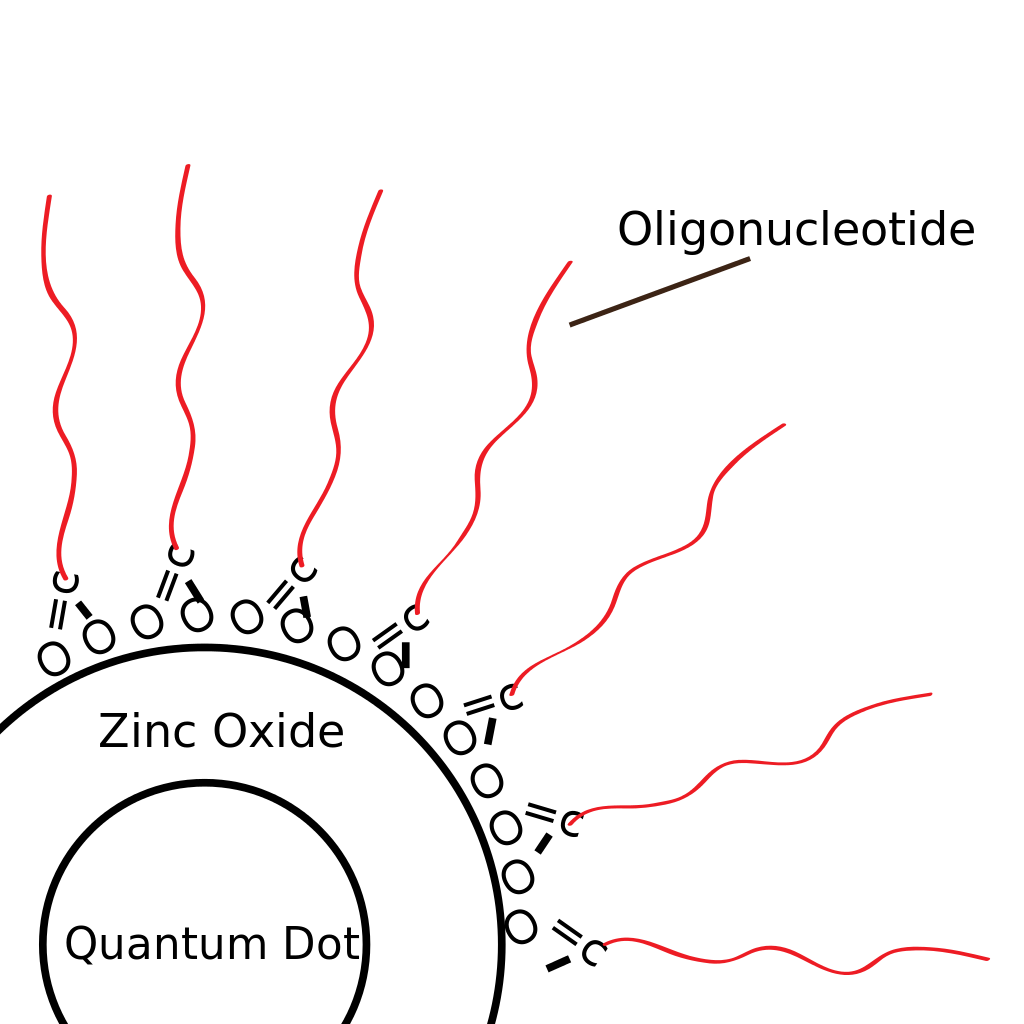 Over recent years, core-shell quantum dots have become the standard for quantum dots in industry and academia.  With core-shell QDs, a thin shell (<10 nm) of wider bandgap semiconducting surrounds the core semiconductor material, typically cadmium selenide (CdSe) or indium phosphide (InP). The shell material often plays a role in stabilizing the growth of the quantum dots as well as passivating the core material.  Organic ligand molecules cap the whole structure and prevent the individual quantum dots from clumping together into a larger aggregate particle.  Many variations on this structure exist, but the core-shell quantum dots currently comprise the standard for high performing quantum dots.  While quantum dots with CdSe cores tend to have the best optical performance, Cadmium is toxic in large doses and use of the material in consumer goods is heavily regulated.  As such, indium-based quantum dots are often used as an alternative, as the industry has made major strides in improving their efficiency.

The Quantum Well (or Particle in a Box)

The unique optical properties of quantum dots stem from the quantum confinement of electrons in the nanocrystal particles.  Due to the small size of QDs, the electrons reside in a well-defined area resulting in discrete energy levels.  This phenomenon can be understood by studying a quantum well. 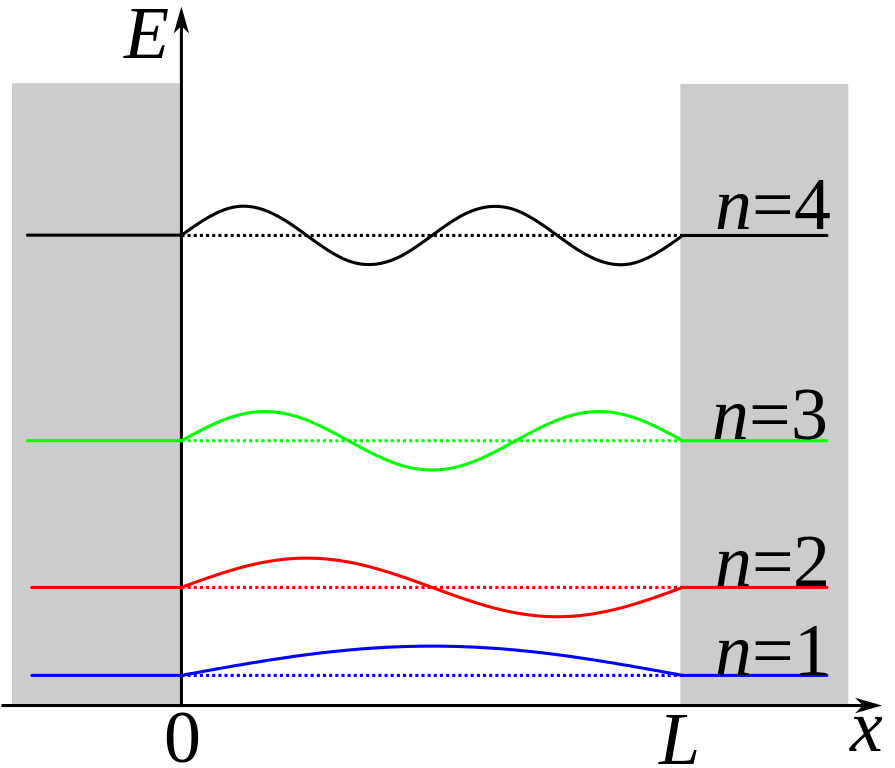 Schematic diagram of a particle in a box. The first 4 possible wave functions are shown.

For simplicity, consider an electron trapped in a 1D quantum well with an infinitely high barrier (sometimes referred to as the particle in a box).  The infinite barrier is not too different from the real world case of using a wide bandgap material for the quantum dots’ shell.   Because of the infinite barrier, the electron cannot exist outside of the well.  Therefore, the wave function determining the position of the electron must be zero at the walls.  The only functions that satisfy these conditions are sine waves (or combinations of sine waves) with wavelengths that are integer multiples of half the length of the well:

where the integer n is called the wave number.  The energy of such a wave function is:

From this energy formula, you can see that that the energy levels go up by discrete steps.  Wave functions with energies below the ground state wave function’s energy (n=1) do not exist.  For QDs, the energy gap that results in photoemission is proportional to this ground state energy.  Since emission wavelengths for semiconducting materials are determined by their energy gap, adjusting the size of the quantum dots’ particle results in highly tunable changes to the emission wavelength.

The quantum confinement of electrons in semiconducting quantum dots gives the nanoparticles highly tunable and narrowband emissions.  This property has made them highly sought after as color filters in display applications.  Quantum dots can absorb higher energy light and re-emit at whatever wavelength the particle is tuned for.  For most displays utilizing quantum dots, an LED backlight provides narrowband blue light that is absorbed by 2 different sizes of quantum dots.  The quantum dots residing on a “color enhancing film” re-emit either red or green light, based on their size.  The re-emitted red and green light combine with some of the blue light that is passed through forming a wide gamut white light source.  In general the wider the gamut on the backlight, the more colors are available for the display.

Many televisions with quantum dots still use liquid crystals to filter the white light into whatever color needs to be displayed, the same way a standard LCD TV with a non-QD backlight works. Instead of enhancing the white light with quantum dots, a superior display in terms of brightness and color can be achieved through another configuration.  So-called photo-emissive quantum television removes the need for a color filter by using quantum dots to form individual red and green sub pixels from a blue backlight, similar to how emissive OLED displays work in phones.  Since quantum dots convert color through re-emitting light rather than blocking it the way LCDs do, quantum dot color filtering affords higher brightness and efficiency than their LCD counterparts.  Unfortunately, the technology has not reached the mass market yet, although companies are working towards that end. 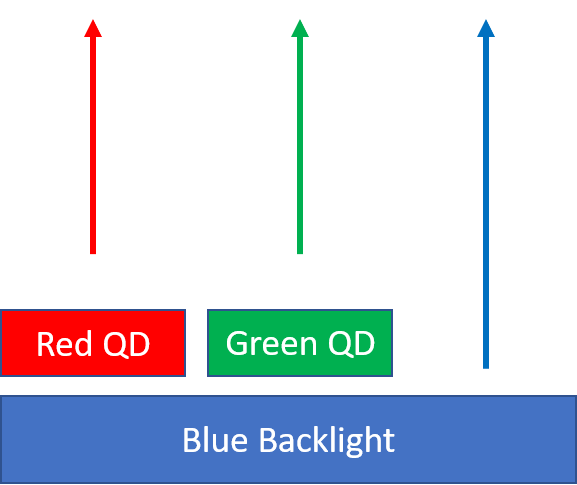 Quantum dots are used in televisions for color conversion.

There are many challenges to producing viable quantum dot technologies, but the primary issues typically faced by quantum dot manufacturers are efficiency, toxicity, and operational lifetime.  Since cadmium is a heavily regulated substance, many manufacturers have turned to less efficient indium based quantum dots for their applications.  Inefficiency occurs due to photoluminescent quenching where thermal or electrical processes reduce the amount of light that gets re-emitted by the quantum dots.  This can occur to a number of mechanisms including interfaces between the quantum dots and other materials, as well as exposure to high temperatures.  This may necessitate specific configurations of the quantum dots, such as keeping the QDs far away from the hot LED backlights.  Additionally, the quantum dots (especially any organic ligand molecules) are vulnerable to humidity and oxygen exposure.  Most commercial uses of quantum dots require the use of barrier films to isolate the quantum dots from these conditions.

Quantum dots are an exciting technology which can provide potential for applications requiring highly tunable light sources.  Scientist have even taken advantage of their intrinsically small size to produce medical imaging and cancer treatment.  In the retail space, high-end QD televisions are already being touted by companies like Samsung, with even more impressive displays to come.  With creative solutions and improved performance in the works, quantum dots are a fascinating technology to watch out for.