Lasers in Ophthalmology: The Future is Clear 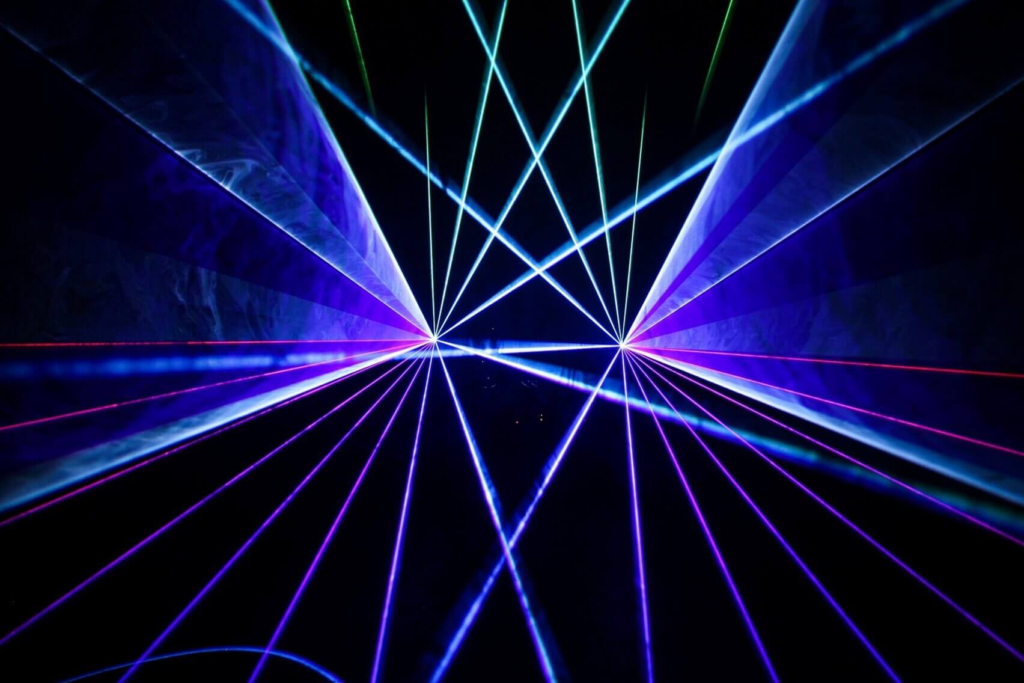 Lasers in ophthalmology have been shown to be valuable, where they are regularly used to both diagnose and treat a wide variety of common conditions. Picture courtesy of Light Diction.

LASERs (or Light Amplified by Stimulated Emission of Radiation) are among the most widely available and versatile optical tools today.  A variety of lasers are commonly used in household devices, such as optical disk drives in DVD players, but they also play a key role in a variety of cutting-edge medical applications in everything from detailed medical imaging, such as optical coherence tomography, to treating eye diseases and dysfunctions in surgical procedures, such as LASIK eye surgery or cataract removal. Because of lasers’ impressive level of precision and safety, lasers in ophthalmology have increasingly become a particularly significant tool.

At their core, what a laser is and how it works is relatively simple. When a laser is turned on, electrons within the device are continuously changing from a single, excited energy state to their lower-energy ground state, each releasing a photon of light in the process of losing energy. Because these electrons are all making the same energy state transitions, every photon emitted from the laser has the same wavelength (or color), which produces the laser’s characteristic stream of coherent light. In order to allow the laser to continue to produce light for long periods of time, ground-state electrons are then re-excited so that they can once again fall back to the ground state and emit illuminating photons.

Lasers in ophthalmology are used in various ways. Optical coherence tomography (OCT) is one of the latest new imaging approaches in modern ophthalmology that utilizes lasers. Traditionally, medical imaging has taken advantage of physics concepts like magnetism, such as in magnetic resonance imaging (MRI) scans, or different forms radiation, like X-rays or PET scans. Instead of using these ideas, OCT uses the coherent light produced by lasers in order to capture images that are similar to those of ultrasounds, shown in the figure below, and is becoming increasingly popular in ophthalmology (medicine of the eye) because of OCT’s sensitivity and micron-scale resolution. 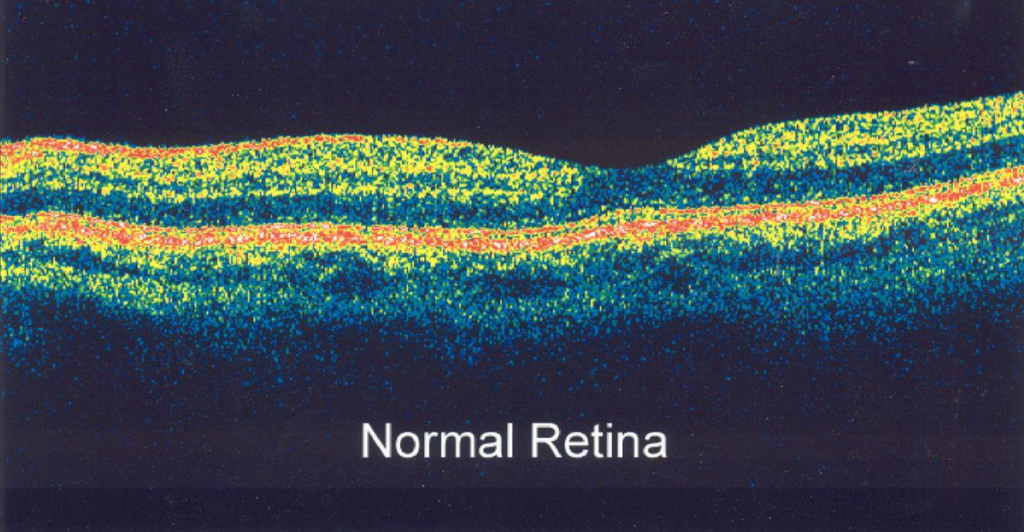 Lasers in ophthalmology – this image was taken of a human retina was taken using optical coherence tomography (OCT). OCT takes advantage of the coherent light produced by lasers in order to image and help diagnose a variety of conditions. Picture courtesy of the American Academy of Ophthalmology.

The imaging techniques behind OCT is very similar to the well-known ultrasound machine. Essentially, OCT works by emitting coherent light waves and then measuring how long it takes those waves to reach a detector and then comparing these received signals to a background sample. Unfortunately, given the manner in which OCT captures images, it is unable to help physicians visualize areas of the body that are much deeper than 1mm. 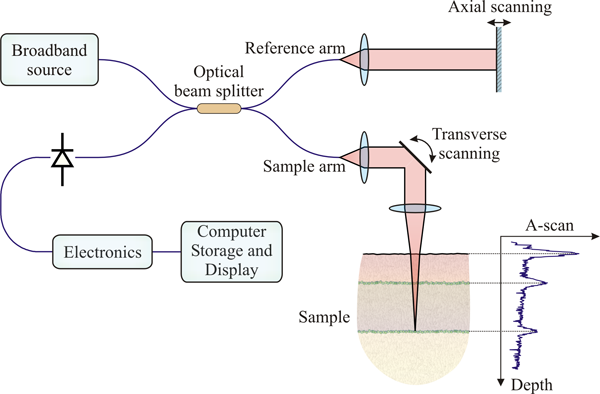 By emitting light waves, OCT is able to capture images of human tissues up to 1mm deep. OCT does achieves this by comparing the reflected light waves to a background data sample to produce relatively high-resolution images. By Image courtesy of OBEL: Optical & Biomedical Engineering Laboratory.

One of the most commonly known applications of lasers in medicine is that of laser eye surgery, such as LASIK eye surgery. In 2015 alone, doctors performed nearly 600,000 LASIK eye surgeries to correct patients’ vision in the United States alone. Normally, when light reaches the eye, its structures are able to focus the light correctly on the eye’s retina, the back surface of the eye, so that the brain can create a crisp image of the world. Not uncommonly, however, the eye is unable to do this properly, because of an issue with one or more structures within the eye. LASIK and many other laser eye surgeries solve this problem by using excimer lasers to reshape the tissues around the cornea, the outer surface of the eye, by precisely removing small amounts of tissue. By altering the shape of the cornea, the focal length of the eye is changed so that incoming images focus exactly on the retina of the eye. 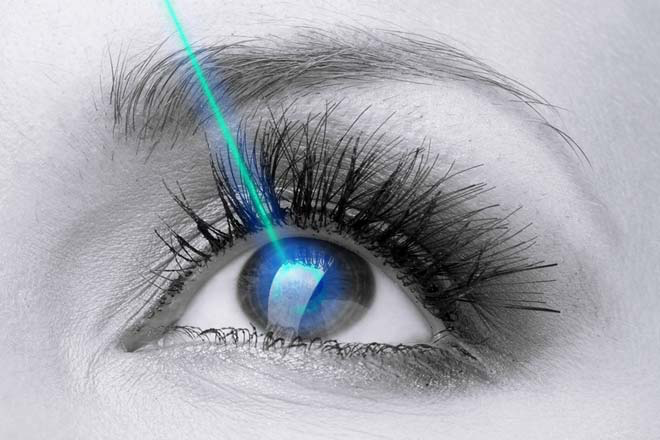 Laser eye surgeries, such as LASIK, are some of the most well known applications of lasers in medicine today that can be used to correct vision problems. In 2015, nearly 600,000 LASIK eye surgeries were performed by doctors in the United States alone. Lasers can also be used to assist with the removal of cataracts, which are nearly 50 times more common than LASIK eye surgeries. Picture courtesy of AllAboutVision.com.

While less well known, lasers can also be used to assist in removing cataracts from the eye. Cataracts are an exceedingly common condition and affect more than 24 million Americans, a number that is only expected to rise dramatically. Simply put, cataracts are clumps of proteins that collect within the eye and cloud and can obscure one’s vision. As people age, these collections of proteins become more common, and existing cataracts can continue to grow and future obscure vision. If left untreated, cataracts can even lead to complete blindness. Fortunately, the condition can usually be treated easily and relatively inexpensively by removing the excess proteins from the eye. To assist with the delicate removal of a cataract from the eye, a femtosecond laser makes a small incision in the surface of the eye. Once a doctor has access to the inside of the eye, a laser can be used to soften the cataract and make it easier to remove.

Lasers’ precision and affordability have made them an invaluable tool for today’s ophthalmologists. Lasers used in optical coherence tomography (OCT) provides these physicians with an excellent new tool to diagnose structural abnormalities or as a method of surgical guidance. Similar lasers can also be used in the removal of sight-obscuring cataracts or eye surgery to correct poor vision. In the future, lasers will certainly find many more new and exciting applications in ophthalmology and other medical specialties.

Thanks for explaining how lasers are being used in ophthalmology in various ways, such as optical coherence tomography, which is used to capture images, similar to ultrasounds. If you’re interested in any of the methods, you’d probably want to talk to your ophthalmologist. Talking to a doctor could give you the chance to discuss the process you’re interested in as well as your situation in order to determine what is best.
http://www.jojohnsonmd.com/about-us