Photonics Meets Forensic Science: No Such Thing as The Perfect Crime 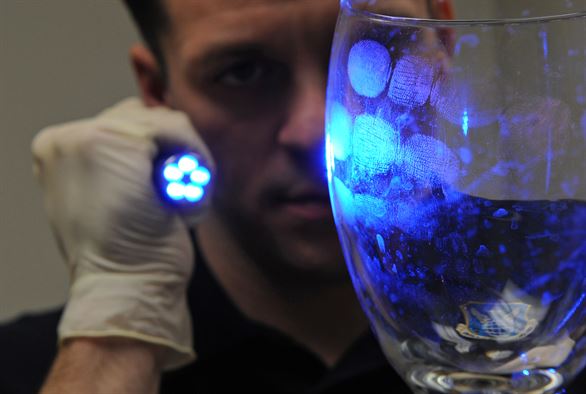 Photonics finds endless applications in the field of forensic science, allowing investigators to reveal evidence like never before. Courtesy of U.S. Air Force.

Forensic science has come a long way since the 700s, when the Chinese first established the concept of utilizing fingerprints as means of identification. Since then, technology in photonics and optics fields has reached a level of sophistication that can detect even the tiniest traces of evidence able to link a person to a crime. Thanks to these incredibly powerful instruments and techniques, the “perfect crime” no longer exists.

Applications of Photonics in Forensic Science

Forensic scientists rely on highly accurate data that will uphold in court. These methods hold an advantage over other analytical techniques since most are non-destructive and non-invasive, and require little to no sample preparation. Today, forensic investigators utilize several different optical-based technologies to disclose evidence and collect solid data. These include ultraviolet (UV) analysis, infrared (IR) spectroscopy, Raman spectroscopy, and hyperspectral sensing.

UV light is the region of light within the electromagnetic spectrum that ranges from 400 nm to 10 nm. This region of light is generally invisible to the human eye, however, many are familiar with the effects of UV light through sunburn. UV photons have more energy than those of visible light, so many materials that reflect visible light will, in fact, absorb UV light. The higher energy of the UV photon results in a greater chance for atomic transitions to occur. This is why some materials are invisible to the naked eye, but are visible with UV. Thanks to this unique property, technology utilizing UV light offers several advantages in the field of forensic science. 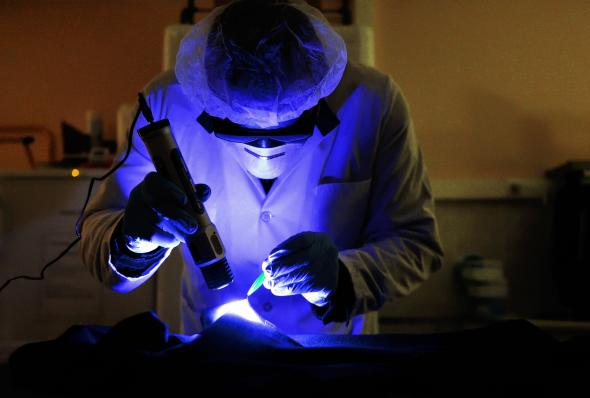 UV light analysis reveals evidence that is invisible to the human eye. Courtesy of Slate.

Many biological fluids, hair types, fibers, and treated latent fingerprints will fluoresce when exposed to UV light. The applications of UV analysis instruments range from the detection of bite marks on skin and shoe impressions on tile to explosive residues, drugs and treated blood stains. In addition to fluorescence, UV is also non-destructive. This is why it is typically the first choice when examining biologically contaminated evidence. Additionally, since UV analysis devices do not require sample preparation for most types of evidence, it allows for the preliminary evaluation of a crime scene before other analytical methods, like luminol, are used.

Forensic investigators also utilize IR spectroscopy as another common optical method. As the name suggests, IR spectroscopy involves using the infrared region of the electromagnetic spectrum. Although IR light is also invisible to the human eye, it is commonly felt as heat. IR spectroscopy utilizes IR wavelengths to excite the molecules of a substance. By measuring the vibrations of these molecules as they are exposed to an IR light source, it is possible to identify different molecules and chemicals in a sample.

Similar to UV analysis, IR spectroscopy is of non-destructive nature. Although it does require sample preparation, it has the ability to analyze with only a small amount of sample. One frequent use of IR spectroscopy in forensic science is paint chip analysis. Painted is a complex mixture consisting of several different components, such as pigments and modifiers. Because painted surfaces are found just about everywhere, an investigation can greatly benefit from paint chip analysis. For example, subjecting a paint chip  to IR spectroscopy can give clues to the specific make and model of a car and thus, a criminal’s whereabouts.

This technique is also used to determine the postmortem interval. When a person dies, their bones begin to lose water, and proteins begin to decompose. IR spectroscopy aids in identifying just how much time has passed since death has occurred through analysis of these molecules. Other applications of IR spectroscopy include measuring drug and fiber samples, analyzing blood alcohol content, visualizing wounds like bite marks and bruises on tissue, detecting blood and explosives, and inspecting forged documents.

When light interacts with a material, it can be reflected, transmitted, or scattered. Raman spectroscopy is a spectroscopic technique that focuses on the scattered portion of the light. During the scattering process, the frequency of light changes when it comes into contact with vibrating molecules. By studying the different vibrations of atoms, Raman spectroscopy can be used to identify and quantify samples. Scientists use this method to obtain a better understanding on the make-up of materials and their chemical composition. 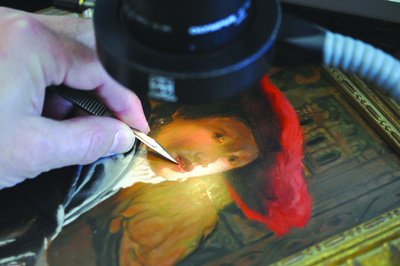 Hyperspectral imaging provides insight on the chemical composition of a material, indicating the authenticity of art pieces and historical documents. Courtesy of Art New England Online.

Raman spectroscopy has numerous applications in the field of forensics, including identification of illegal drugs, and gunshot and explosive residues. Furthermore, it is extremely useful in the determination of forgery. Raman spectroscopy allows for the visualization of individual pigments, which permits the user to differentiate between and characterize various materials in a document.

Advances in the photonics and optics field has also given way to forensic analysis via hyperspectral sensing. This method combines digital imaging with conventional reflectance and fluorescence spectroscopy. Hyperspectral imaging records images as a function of wavelength and provides an individual reflectance and fluorescence measurement for each pixel in an image. By subjecting images to different wavelengths, differences in intensity and contrast between samples can be visualized. 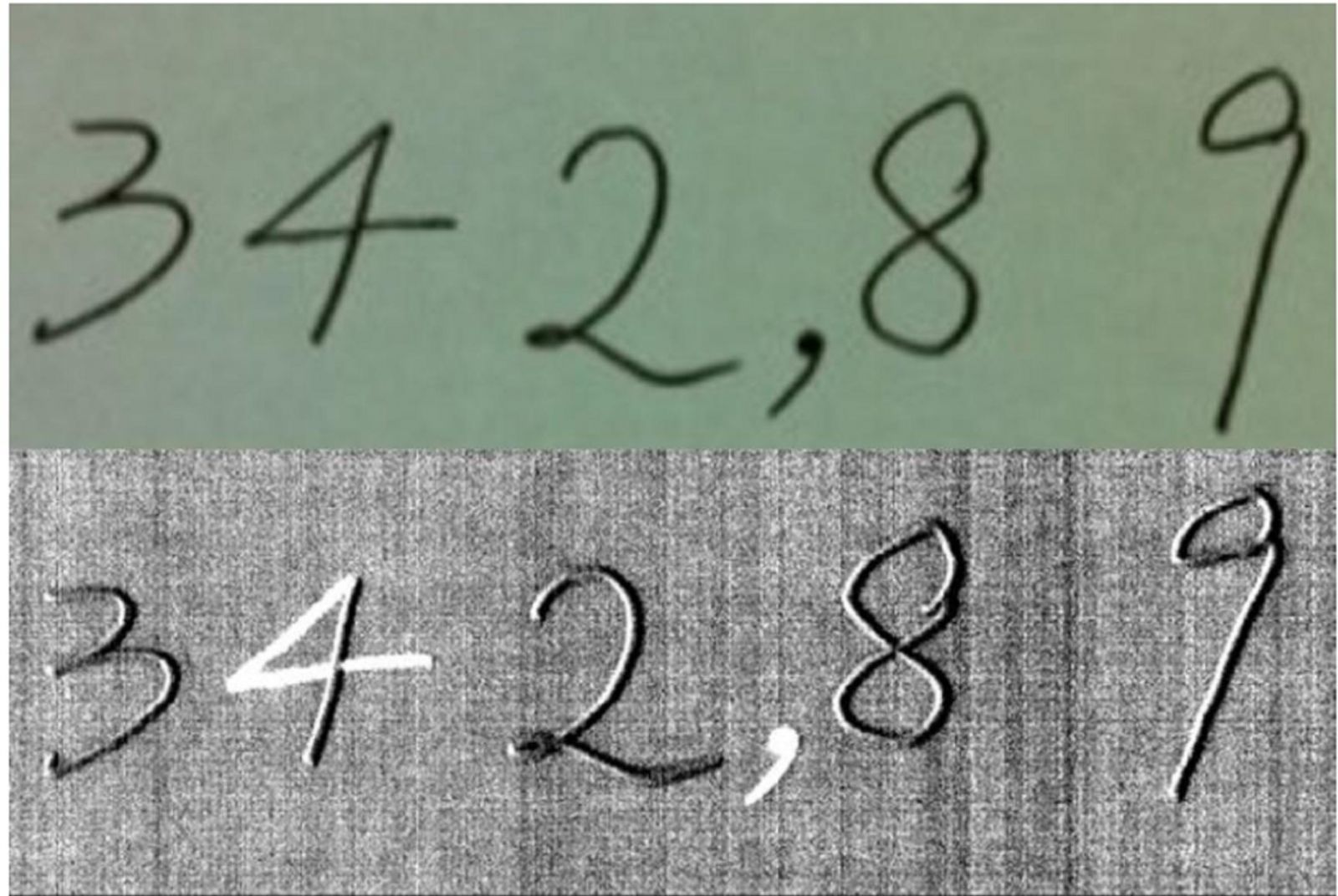 Hyperspectral imaging is able to differentiate between ink mismatches, providing an invaluable tool for detecting forgery. Courtesy of Zolix.

Using this concept, hyperspectral imaging finds relevance in varying tasks in forensic investigations. This includes questioned document analysis, arson investigation, bloodstain visualization, fiber analysis, explosive residue detection, duct tape examination, and fingerprint enhancement. One of the main uses for this technology is for making comparisons between traditional handwritten, computer printed, or copied documents in order to reveal differences between them. For example, if someone attempts to change the value on a bank note, hyperspectral imaging can detect ink mismatches between the original pen and the pen used by the forger.

High-end photonics and optics equipment provides forensic investigators with a sophisticated tool to unveil evidence in criminal investigations. These devices detect the smallest traces of residue, determine forged documentation, and expose blood spills even after cleaning. Amazingly, most of this is done without damaging the sample or the crime scene. With the ability to collect evidence once considered invisible to the human eye, investigators are now able to provide concrete evidence stopping criminals in their tracks.

I like this post but I think there is a Photonics technology missing. The field of firearms identification is undergoing a major change in technology and capability with the introduction of optical topography into forensic laboratory practice. Optical topography provides a three-dimensional (3D) view of the surface of a bullet or cartridge case at resolutions that capture the full range of subclass and individual characteristics. This technology offers an additional method to the comparison microscope for one-to-one firearm evidence comparisons, and may provide an objective measurement of similarity toward a possible source identification.