Laser Marking: The Light Pencil To Fulfill Imagination And Artistry 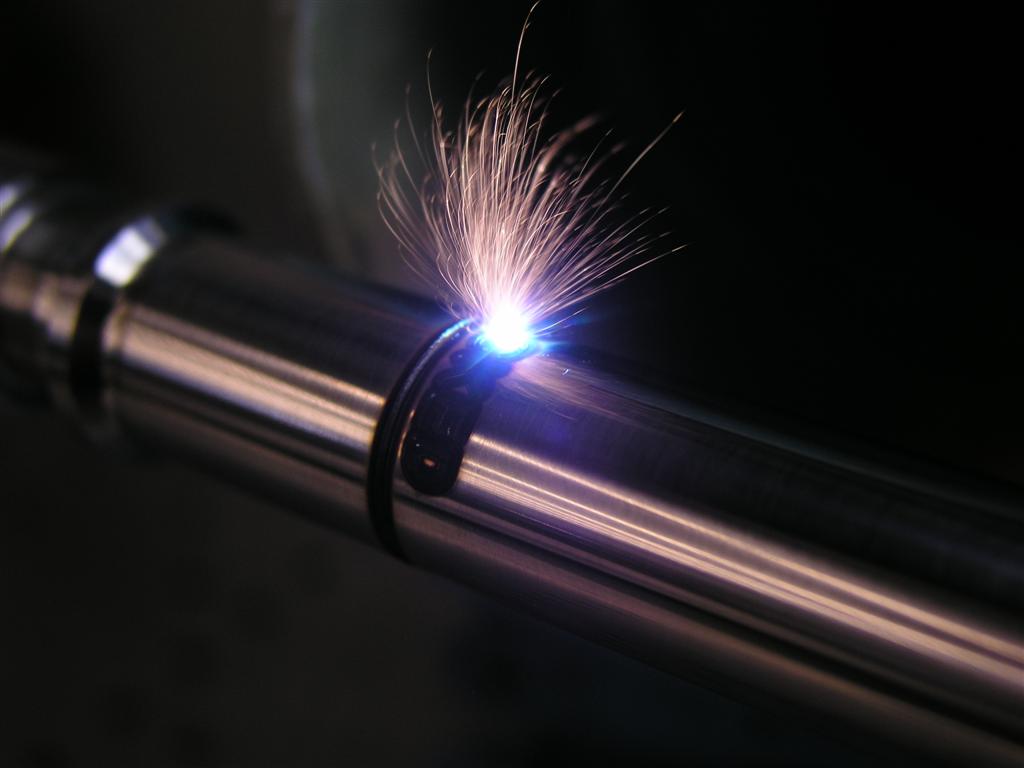 Laser marking has spread into a wide spectrum of industrial fields. In this picture, an industrial laser is engraving an aerospace component. Courtesy of laserimpressions.com

What Is Laser Marking?

It has been a long history for merchants to stamp unique marks on their own products for identifying purposes, and now this method has been revolutionized by laser marking. By embedding information such as manufacturing details and theft prevention codes within a small laser scribed image, manufacturers can now manage their products with improved efficiency and mark materials of decreasing sizes and brittleness due to the reduced beam diameters and non-contact nature.

What Are The Mechanisms Of Laser Marking?

The basic idea of laser marking is to draw images and patterns on material surfaces with a laser beam. Different processes fall into a category of five mechanisms as listed below.

This mechanism can be simply interpreted as slight burning. It occurs when the laser beam heats the material to a temperature and then induces thermal degradation. In polymers and woods, the mechanism is referred to as charring, and normally results in a black mark. This method does not affect the surface morphology, and is mainly used on specially pigmented plastics and high-alloy steel or brass.

Foaming is a common marking method for polymer materials. It first melts the material with laser beams to encapsulate small gas bubbles, and then cool it down to create foam-like structures. Since the bubbles change the refraction properties of the materials, the processed locations will usually show lighter colors than the surroundings.

Another marking technique involving surface melting is microcracking. Shallowly melted surface (to about 20 μm) after resolidification contains many tiny cracks that scatter light and exhibit contrast to the substrate. Laser marking for glass is usually achieved by this mechanism and a shorter wavelength excimer laser can be employed for finer structures.

In both the laser foaming and microcraking processes only the microstructure of the surface is changed and no photochemical reactions or ablation take place. Thus the required beam intensity is relatively low.

When laser beams and pulses are strong enough, the surface materials can be selectively removed via quick vaporization and sublimation. The image of the marks are hence displayed as the contrast between the processed regions and the substrates. Laser engraving is applicable to various materials such as plastics, glass, ceramics and even metal, and the proper candidates to execute the jobs are Nd: YAG lasers, CO2 lasers and fiber lasers.

Although laser ablation fulfills marking also through selective removal of materials, it differs from laser engraving in that the laser breaks chemical bonds immediately and therefore transforms the molecules into a cluster of plasma. As the process is usually carried out by pulses (e.g. from an excimer laser) whose duration is shorter than heat diffusion, collateral damage to surrounding materials can be significantly avoided, and the marks arise as a result of the contrast between the substrate and the ablated regions. The technique may be used on homogeneous materials as well as the layered substrates, and one typical application is the femtosecond laser aided cornea surgery.

When exposed to laser beams, some colored pigments can be changed by a photochemical reaction. This is because the radiation of sufficiently short wavelength, such as that from an excimer laser, dissociates molecules to cause a color change and thus a permanent mark. This method is proved effective for some types of polymers.

The detailed information about laser marking mechanisms will be discussed in one of our following articles on laser marking.

How The Mechanisms Are Realized By Laser Marking Systems?

The multiple mechanisms explained above provide several angles to access laser marking,  and now the practical engineering problem is how to deliver the beam energy onto the material’s surface. Typically, there are two major types of laser marking systems available on the market.

The mask approach to laser marking adopts an optical arrangement similar to that of a slide projector. By illuminating a mask which contains desired patterns and subsequently focusing the transmitted light onto the target materials, the marks can be patterned all at once in a single laser pulse. The masks may be metal stencils which have connecting strips, or glass substrates covered with dielectrics. This marking methodology is enormously convenient for producing large and complicated patterns. However, due to the optical energy loss caused by the mask, the laser power has to be sufficiently high so that the surface materials can be successfully removed.

Mask marking technique is especially applicable to soft organic materials including paper, wood and plastics etc, and the light sources frequently used in this way are CO2 lasers. This is because the CO2 laser wavelength is absorbed well by many organic materials. Typically, a CO2 laser of reasonable size can mark an area around 1 cm2 on typical packaging materials in one pulse, making the mask systems very popular for  sequential coding, batch coding, open or closed date coding, and imprinting of specialized logos. In recent years, excimer laser appears to be a powerful competitor in the mask marking industry. In addition to the advantage of the higher absorption of ultraviolet light by many materials, the short wavelength of excimer laser allows better pattern definition.

An alternative approach to make refined laser marks is the scanning technique. Usually, the laser beam is first expanded to reduce divergence and guided by galvanometer mirrors. It then passes through a lens and is focused onto the marking area. As the optical components can be precisely adjusted by computer algorithm, any desired pattern can be drawn by proper programming.  A representative example is the dot matrix patterning in which high energy laser pulses knock out a series of tiny pits to define the desired images, and particularly, this method is acknowledged for creating high quality alphanumeric codes.

The light sources used for the scanning methodology are usually Q-switched Nd:YAG lasers, due to their narrow lines and high peak powers. They exhibit satisfying performance on hard materials with relatively high latent heat of vaporization, like metals or semiconductors. For chip manufacturers, Nd: YAG lasers are highly favored for imprinting identification marks on silicon wafers, not only because of the contamination-free marking processes, but also due to the more absorption of the 1 μm light by the marked material. However, when higher throughput on non-metal materials is demanded, a slow axial flow and sealed CO2 laser system may be a cheaper solution.

The advantages of the scanning laser marking approach are obvious. In addition to well-defined pattern delivery, it endows the stiff laser marking machines with unparalleled flexibility in pattern creation. Moreover, unlike the mask scenario in which a majority of light energy is wasted, scanning approach can make use of the entire beam power for marking. However, scanning technique does suffer from prolonged working time, and the sophisticated optics alongside with the necessary shielding rise the system cost inevitably.