In our last blog post we gave a quick introduction to laser marking. In this post we will look into the various laser marking mechanisms. It may look dazzling to categorize laser marking approaches according to the five distinct mechanisms. However, such a classification is almost self-evident when interpreted by the scales of photon energy, the differences in which directly determine the types of light-matter interaction taking place.

When a beam of photons impinges onto a material surface, energy is transferred to intensify the vibration of molecules, hence, giving rise to heating as a macroscopic phenomenon. Predictably, the materials will be melted, vaporized or sublimated, and even decomposed. The laser marking mechanisms belonging to these situations are foaming & micro-cracking, engraving, and discoloration.

Foaming and microcracking usually demand least amount of energy. By inducing phase transition from solid to liquid, these two mechanisms alter the surface optical properties, and manifest the processed regions as marks. Noticeably, microcracking differs from foaming in that it also involves thermal expansion. When thermal stress due to non-uniform expansion is sufficiently large, tiny fractures appear at the boundaries of the surface regions. Thus, unlike laser foaming which embeds small bubbles right under the surface, microcracking relies on light scattering at the tiny cracks to achieve marking.

Compared to other mechanisms, engraving is the easiest and the most commonly understood method of laser marking mechanisms. When a beam of laser is focused onto a small surface area, the converged photon energy can possibly trigger fast and severe localized heating. As a consequence, part of the surface materials can be immediately transformed from solid to gas via vaporization and even sublimation, leaving a dent of around 0.1mm deep as a mark on the material surface.

Proceeding to even higher optical intensity, laser beam will be able to induce not only physical phase transition, but also changes in chemical composition. By breaking chemical bonds and stripping off atoms from molecules, heat dissipation around the laser spot will result in decomposition of materials, and generate dark color marks. Particularly in laser marking techniques, this mechanism is named discoloration because the processed region is in atmosphere depleted of oxygen, and the residue after marking is rich in carbon, which darkens the marked area. This is the reason why laser produced wood charring always appears black, and in extreme situations where the residue is mostly carbon, the process becomes carbonization.

While all three thermal modes of beam-material interaction require a temperature rise in marked materials, the applicable photon energy is still relatively low. Thus, a wide spectrum of light sources can be employed for marking via these three approaches, and the most commonly used ones are CO2 lasers and Nd:YAG lasers.

The pulsed TEA CO2 laser is the most widely accepted source for marking non-metallic consumer products. It can produce marks on plastics and glass via engraving and microcracking, and on wood and papers via discoloration. On metallic surfaces, due to their high reflectivity of far infrared light, marking with CO2 lasers is difficult but can still be accomplished with the help of absorptive coatings. Also, CO2 lasers can be employed to remove thin layers of paint or ink from a substrate. 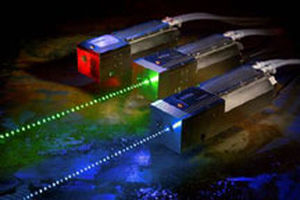 The Nd:YAG lasers used for marking can work in both CW and pulsed modes. Their operation principles and target materials are generally the same with that of CO2 lasers. However, the shorter wavelength of Nd:YAG lasers enables marking of finer patterns, and the better absorption by metals and alloys greatly expands their application realm. Typically, Nd:YAG lasers possess 10-120W for average power, 10mJ of pulse energy and 60kW of peak power. The ones with the highest peak power can also be used for marking via ablation as we discuss below.

Counter intuitive as it might seem, materials hit by laser beams with increased photon energies are not heated further as expected but rather become less susceptible to thermal effects. By introducing light sources with shorter wavelength and high beam power, new effects can be driven and utilized for novel laser marking methods including bleaching and ablation.

Material bleaching caused by laser beams is attributed to the interactions between the laser photons and the chemical bonds that hold the materials together. This is referred to as a photochemical effects. Two distinct mechanisms account for most of the bleaching observed in laser marking mechanisms. These techniques are currently in the center of attention for further developments in micro-machining.

In the first scenario, excimer lasers are ideal choices of light sources, because the energy of the provided ultraviolet photons is on the same order of magnitude as the chemical bonds in many materials. As a consequence, due to resonant effect, those materials can efficiently absorb the excimer laser photons, which break the chemical bonds and induce color changes. In the second one, some solid state lasers such as frequency-doubled Nd:YAG lasers at 532nm are employed to generate femtosecond pulses. Because of their high peak power, strong non-linear absorption of photons can occur in materials that would otherwise be transparent to such wavelengths. In both situations, the duration of interaction is shorter than the time scale of heat conduction. Thus, while marking patterns with higher resolution, laser bleaching cause no collateral heating to the adjacent material.

Laser ablation uses high energy pulse irradiation to achieve strong electronic bonds breaking and hence decomposition of materials. The resultant molecular fragments then expand in plasma plume and are soon ejected by the rapid build-up pressure. Excimer sources are particularly suitable because of their high absorption by non-metallic materials. With a 105-108W/mm2  power density and a 1-100ns pulse duration, excimer lasers can provide clean ablation interfaces. 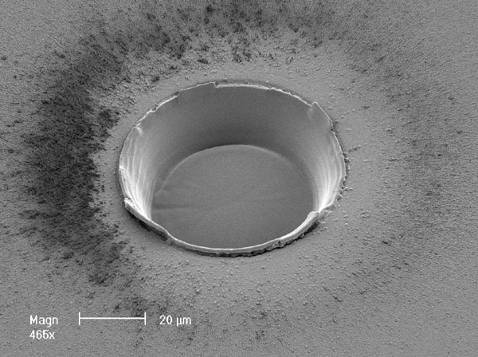 A SEM image of a laser ablation pit on copper. Courtesy to University of Melbourne.

Typically, longer wavelength excimer lasers such as xenon chloride at 308nm and xenon fluoride at 351nm are used for surface marking of plastics because most polymers absorb well at these wavelengths. The shorter wavelength argon fluoride laser at 193nm are able to cleanly ablate glass. For metals and alloys, ablation usually demands higher power density (109 – 1011W/mm2) and shorter pulse duration (0.1 – 500ps). This can be achieved by pulsed Nd:YAG, Nd:YLF and Ti:sapphire lasers.

Obviously, there is one simple criterion of selecting the most proper marking approach: the photons emitted by the laser have to be well absorbed by the material surface. However, due to the existence of many more variables, greater complication will take place regarding the choice of a suitable laser marking system. We will address this and other topics in our upcoming laser marking articles.

To learn about laser markers and engravers, please visit FindLight

Very technical presentation. I was looking for getting some ideas and prices of different laser marking machines online and found this cleanly shaped website. Just going through the whole explanation including energy regimes, foaming, engraving, etc. seems so very effective and tech educative. This was really a useful read for me. I would like to also share a site www.heatsign.com that is also a good relevant site I think and may be helpful for the readers like me. Thanks for your brilliant job.

Laser marking is so much more versatile than some might believe; what seems like an efficient method of design is also an effective marketing technique and prevents forgery, among other things. Great article

Your information about laser marking machine is very detailed and professional. This is a very good article, recommended! Thank you for sharing！
https://emitlaser.com/Our website also has many helpful articles for readers to learn.