How Does E-Ink Work? Understanding the Science

Today’s blog post is sponsored by Gentec-EO – a leading manufacturer of laser power and energy meters.

Electronic ink or electrophoretic displays (EPD) is a revolutionary technology which is replacing paper. You may have seen this technology around you recently in a Kindle or a retail shelf label. But with a world full of monitors and electronic displays made with liquid crystals, light emitting diodes and plasma, why would you still want to use a Kindle? Because it is lighter, more energy efficient, and most importantly, easier on the eyes. One of E-Ink’s technologies is bistability which means that the image on the screen will be retained even when the power resource is removed. So the eReader only needs power to turn to a new page.  Bistability is the key to saving power and having a long battery life. E-Ink display uses plastic based thin film transistors (TFT) and a plastic backplane, which is almost half the weight compared to glass-based TFTs. For LCD, the light is coming from the backlight shooting right into your eyes. However for E-Ink displays, more ambient light from the natural environment is reflected from the surface into your eyes. It is similar to regular ink and paper. As long as you are not reading under the sunlight, eReading is saving your eyes from lots of damaging blue light. Now let us take a look at how EPDs became a fusion of chemistry, physics and electronics. 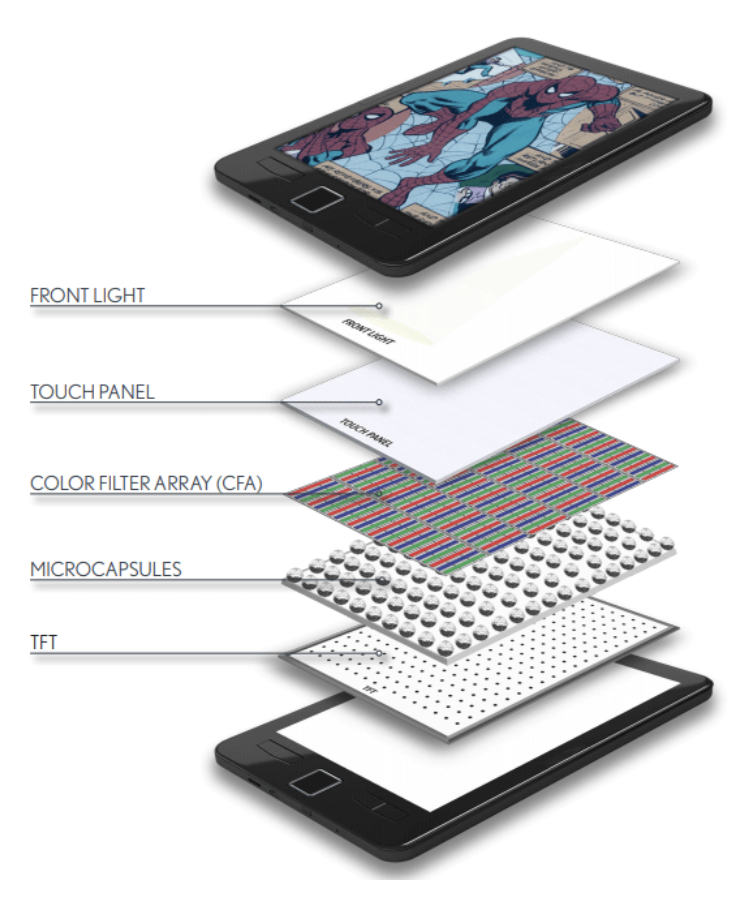 The E-Ink contains pigment particles, charge controlling agents (CCAs), nonpolar solvent, and various additives. The particles can be driven by an external electric field after they were surface treated and charged by CCA. Then the specific distribution could be controlled by a designed wave form, which results in different reflectance as gray level or gray scale.

The charges of the particles depend on the modification of particles and functional groups of CCAs. CCAs provide dispersity and suspension to particles because the hydrophobic side of the CCA dissolves and disperses in nonpolar solvents, and the hydrophilic side is adsorbed to the particles while CCAs assemble in reversed micelles (RMs) so that the sedimentation and agglomeration would not happen with particles. When an external electric field is applied, the separation of electronic ink and RMs occurs. Then the particles can move around with specific direction.

The rheology of the electronic ink particles within the micro-chamber is really complex. It involves many factors and forces, such as the electrical voltage, charging amount on particles, the particles size, the solvent’s viscosity in the system of an electrophoretic dispersion, especially the relationship between the particles’ velocity and the solvent’s viscosity. People found out that reducing the viscosity was an effective method to increase electrophoretic mobility, but it would deteriorate EPD’s bistability. One of the strategies is only reducing the viscosity of suspending liquid while applying the voltage, and to recover the viscosity after removing the voltage, which is called the inversed electrorheological (IER) effect. Another strategy is to use liquid crystal to activate charging and optimize the IER effect. The mobility of E Ink is much better than regular ink.

Bistability freezes the distribution of particles in place after removing the external driving voltage. At this time, particles are acted upon by many forces, such as buoyancy, van der waals force, coulombic force, frictional force, gravity, and solubility. This is the balance that keeps the particles in the same place and the reason why E-Ink saves so much power between switching pages.

However, the electric field of opposite particles could cause the degeneration of grayscale. We can achieve this multi-grayscale by using pulse amplitude modulation (PAM), controlling the polarity and the amplitude of the voltage, or pulse width modulation (PWM), controlling the polarity and the duration of the voltage. Lots of things still can influence the performance of E-Ink, such as particle size distribution, zeta potential, additive amounts, dielectrics’ condition, and even temperature. Now we understand these technological challenges that E Ink is facing.

Now that we understand these technological challenges that E Ink is facing, let’s take a look at 5 different pigment ink system of E Ink and how it become more and more colorful.

E-Ink JustTint™ is a variable transmissive film which can control the light go through the surface when adhered to glass or plastic. It is a one-pigment system which means only 1 color can be shown. The black pigment could move to the side and the capsule would show a transparent area when a charge is applied. 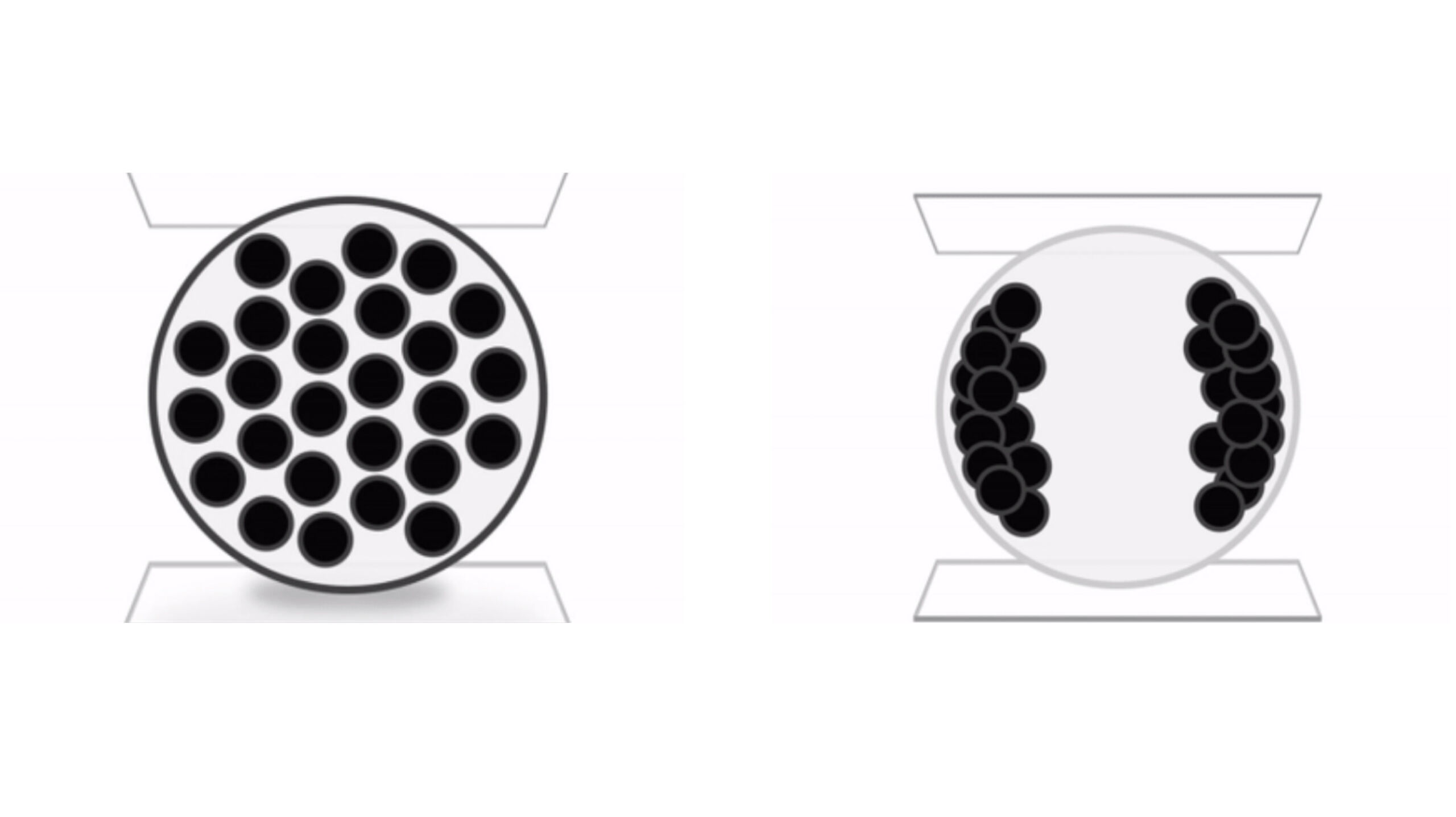 E-Ink’s two pigment electronic ink system is made up of millions of tiny microcapsules, each about the diameter of a human hair which is about 17 micrometers to 181 micrometers. Each microcapsule contains negatively charged white particles (highly scattered particles) and positively charged black particles ((light absorbing particles) suspended in a clear fluid. When an external positive or negative electric field is applied, corresponding particles move to the top or the bottom of the microcapsule. Then the viewer can see the surface spot as black or white. This two pigment system is more challenging because both two sets of particles must to be surfaced treated to avoid agglomeration.

E Ink’s Spectra 3000 utilizes a 3-pigment ink system in a microcup structure. This ink was engineered specifically for Electronic Shelf Labels (ESL) and is offered in black, white and red, and black, white and yellow. You can notice these in some shopping malls. When a charge is applied to the pigments, and to a top and bottom electrode, the pigments are going to move around and show people specific color. However, instead of the use of microcapsules, this system utilizes Microcups®, which are filled with the electrophoretic liquid, scattering particles and sealed with polymer coating.

In 2016 E-Ink showcased a multi-pigment ink system, Advanced Color ePaper (E Ink ACeP™). ACeP™ achieves a full color gamut, including all eight primary colors, using only colored pigments. The ink can be incorporated into either microcapsule or microcup structures. Color is achieved by having all the colored pigments in every pixel, removing the need for a color filter array.

Now that we reviewed how E-Ink works and understand the challenges E-Readers are facing, would you rather choose a Kindle or an iPad to read a book? I believe one day we will have full color and flexible E-paper with high switching speed, good bistability, high color performance, handwriting capability, and environmental endurance. That would be the perfect Christmas gift to your friends, family, and as well as the earth. 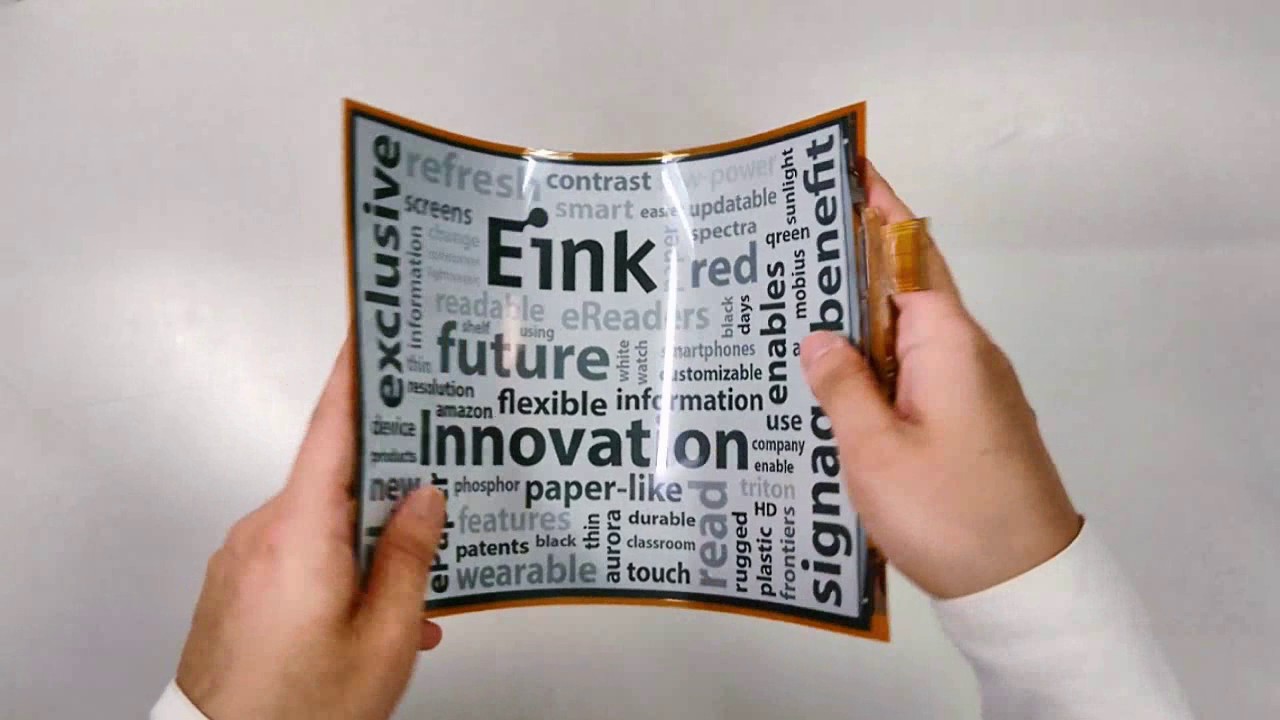