You might have heard that lasers can be used in treating kidney stones. The method – often referred to as laser lithotripsy – has become a standard tool in urology. In this article, we will discuss general procedures typically used to treat kidney stones, and will see how photonics approaches this problem.

Did you know that everyday, human kidneys filter about 150 quarts of blood? However, only about 1 to 2 quarts become urine, while the rest is circled back throughout the body. Such an important function must be properly working at all times to ensure that the body maintains homeostasis. However, sometimes different diseases can take hold of the kidneys, which can eventually cause a buildup of toxic waste in the blood. 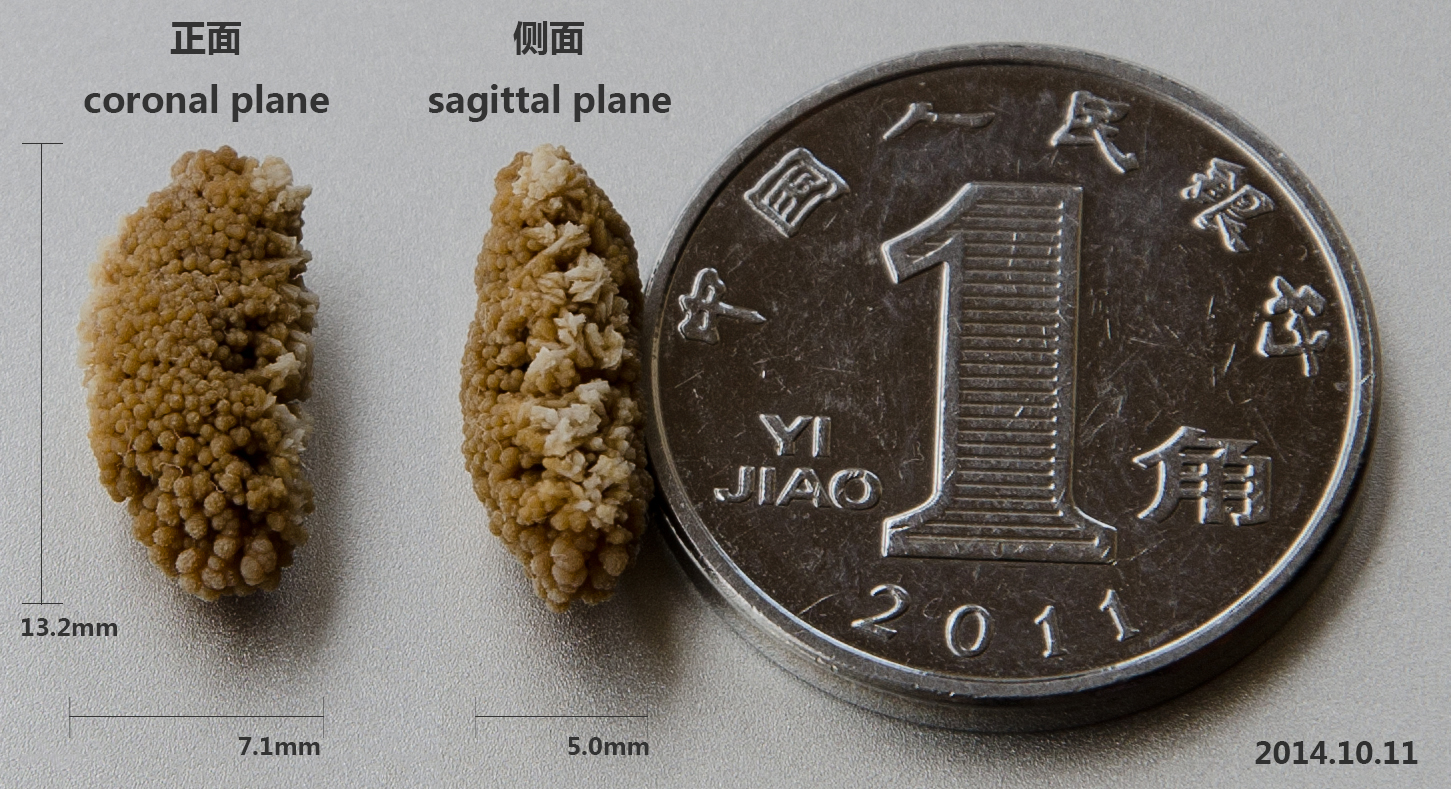 An example of how large kidney stones can form. These can cause excruciating pain. Courtesy of Wikimedia Commons.

A common kidney issue that people experience are kidney stones, which is mineral buildup in the kidneys from improper nutrition or kidney malfunction. These stones can cause severe pain and infection, which can potentially be fatal to the patient. So, how do physicians treat such a condition in an effective manner without harming the patient? To face this problem, doctors typically turn to lasers to treat kidney stones. This treatment, also known as laser lithotripsy, has been proven to be a safe and effective way to alleviate this painful disease.

Shock Wave Lithotripsy: Kidney stones were discovered in ancient Mesopotamia around 3200 to 1200 BC. However, the method in which we treat kidney stones is significantly different today than they used to be. One method used to treat kidney stones is Shock Wave Lithotripsy, where an ultrasound is used to find the stones, and a shockwave is sent to the body, traveling through the skin and rupturing the stone into smaller pieces. This method has been shown to be effective against only certain types of stones.

Open Surgery: Another method used to treat kidney stones is an open surgery, where the surgeon makes an incision in the side of your body and slices open the kidney to access the stone and remove it. This method is effective at removing the stone(s) from the body, but simultaneously increases the chances of infection due to directly exposing the innards to the outside environment.

Laser Lithotripsy: While each of these methods have their own advantages and disadvantages, we will look into a different method to treat kidney stones, which involves using lasers to destroy them.

How does laser lithotripsy work for kidney stones?

However, if all the pieces remaining are large, the surgeon then turns on the main power system for the laser. This laser is inserted into the same path as the ureteroscope, where the surgeon can see the kidney stone(s). The holmium laser energy from the system is transmitted through an optical fiber, which is aimed at the stone. This high energy laser beam blasts and destroys the stone, wherein the basket can collect or continue to break it. Otherwise, the surgeon will leave the small dissipated stones to be released into the urine stream. 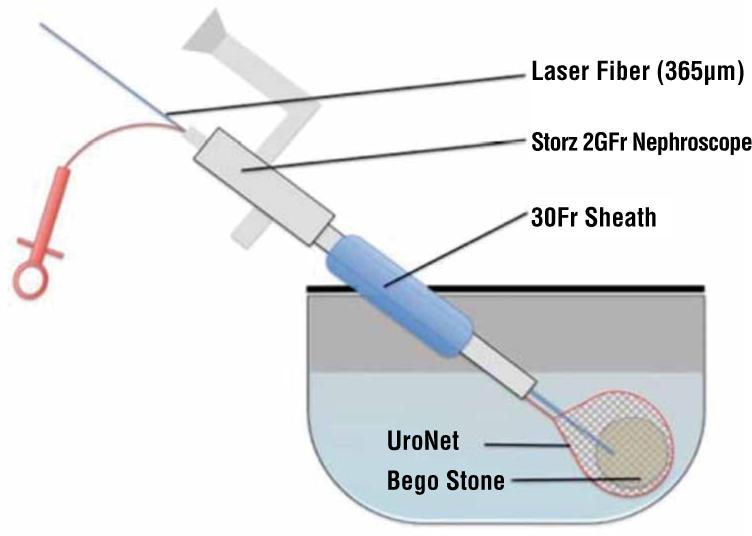 Schematics of the fiber optic used to treat kidney stones. The sheath protects from damage as the laser travel through the crystal cladding. Laser beam is aimed a the stone and a small basket is used to collect broken fragments for removal Courtesy of SciELO – Brasil.

This advanced method of removing kidney stones has both its benefits and drawbacks. Some benefits include superior results to the shockwave method, non-invasive nature of the procedure compared to open surgery, as well as high effectiveness for people with multiple stones and people on blood thinners. However, this surgery does come with its side effects, which may include pain, injury to the ureter, and in some cases, hemorrhage.

The heart of the equipment used in such treatments is the holmium laser – a solid state laser that operates in the mid-IR range. The active medium of holmium lasers is a holmium (rare element) doped yttrium-aluminum-garnet (Ho:YAG) or holmium doped yttrium-scandium-gallium-garnet (Ho:YSGC). Holmium lasers are pulsed with a repetition rates of up to 50Hz and pulse energies of a few Joules per pulse. With laser pulse durations in the order of only 300μs, they deliver significant peak powers.

Holmium lasers are pulsed solid state lasers operating at an infrared wavelength of 2,100 nm. The output laser beam can easily be transmitted through an optical fiber for effective delivery. As the energy runs through the fiber, it eventually is emitted through the laser fiber tip. Typically, these fiber tips are disposable and one time use because as time passes, the material wears down, making the laser less efficient.

Why are holmium lasers are the current laser of choice for laser lithotripsy? First of all, the 2100 nm wavelength has easy transmission through optical fibers, making it usable for minimally invasive surgery because the optical fibers are generally thin and can penetrate through the ureter. This 2100 nm wavelength that passes through the optical fibers is also much safer than other lasers because this wavelength is well absorbed by water. Since there is an abundance of water in the tissue, this special property ensures that the deepest the laser cuts is the surface of the tissue, never harming any of the deep blood vessels surrounding the area of concern.

In addition to the safety characteristics of the holmium laser, this laser also has technological advantages. The holmium lasers are pulsed, which allows delivering significant amount of optical energy in short bursts that can easily fragment the stones. In addition, it is easy to change the energy of holmium lasers by changing the repetition rate of the laser. This allows for significant control over the optical pulse peak powers and thus a precise control over the stone fragmentation process.

One final advantage of holmium lasers is that compared to other lasers, holmium laser output has reduced damage to the optical fibers when used for a long period of time, ensuring its safety during lengthy surgical procedures.

Kidney stones cause a lot of pain and problems for many people even though they are often smaller than a coin. Despite this issue, it’s not a formidable problem for most surgeons with modern surgical techniques. This technology has come a long way since the 504 nm dye laser – the first laser developed for the purpose of finding a minimally invasive way to rid the body of kidney stones. The new standard of holmium laser technology brings about the advantages of less tissue damage, better coagulation properties, and lower cost.

However, like all technology, even holmium lasers can be improved. New fiber designs such as additional coating can lead to less damage and breaking of the fiber during the procedure, and new laser mediums such as Thulium are being researched due to the possibility of less tissue damage. The future improvements of this technology is exciting! With the power of photonics, we have a standard way to combat kidney stones, and the possibilities of lasers in medicine are endless.