Everything You Should Know About Thermal Imaging Cameras

Today’s post on thermal imaging cameras is prepared by a guest blogger – Amanda Wilson – a technical blogger specializing in the electrical and electronic test equipment and measurement industry. 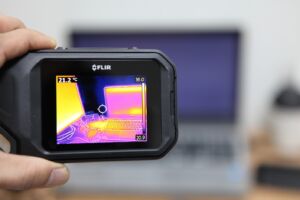 What do military surveillance and navigation, skin temperature analysis, and cancer detection have in common? Thermal imaging cameras! These devices are being used widely across a slew of industries as a fast and accurate solution for measurements in almost any process involving emission or exchange of heat energy or temperature.

Though the principles of thermal imaging and thermography were established in 1960 by Sir William Herschel, a German-British astronomer who discovered infrared light, the technology and equipment have now been developed extensively for engineering, repair, and design applications in many fields that utilize technologies such as smart sensors, microcircuitry and WiFi connectivity.

What is a Thermal Imaging Camera?

A major advantage of the thermal imaging camera is the ability to convert infrared radiation, which is invisible to a naked eye, into wavelengths of visible colors on the electromagnetic spectrum that can conveniently be perceived and analyzed.

How do Thermal Cameras Work?

A thermal imaging camera works by detecting and measuring the infrared radiation or the heat energy emitted by objects and representing it in the form of an ‘image’ or a ‘thermograph’ (also known as thermogram). This is done using a special camera lens and an imaging sensor that is sensitive to frequencies in the infrared region of the electromagnetic spectrum. 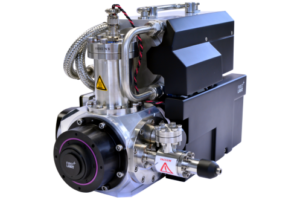 The imaging or heat sensors are constructed as a grid of pixels, which convert the infrared wavelengths hitting them into electronic signals. The signals are then processed into a color map of different temperature values and gradients within the main body of the camera. The color map is displayed on the screen and can be used for further analysis.

The thermal camera generates images of infrared radiations that are invisible to the naked eye into a visible image, which is why the process of thermal or infrared imaging is also known as “invisible imaging”.

Eight Features and Specs to Consider

There are certain key features and specs of thermal cameras that you should consider before selecting one to meet your needs:

Focus: There are various focus mechanisms such as

Lens: There are lenses for various applications such as standard, wide angle, telephoto, and macro lens. Depending on your need, choose a lens that best serves the purpose of capturing the right area of view with the best resolution. Some thermal cameras also allow you to change lenses based on the type of operation or the target.

Memory and sharing: Select a memory that can store the IR images such as a removable SD card, or a USB flash drive. Certain thermal cameras can also connect to WiFi and Bluetooth for sharing and backup of data, portable analysis, and report generation.

Emissivity and reflected temperatures: Surfaces with low emissivity such as shiny metals can reflect infrared radiations from other objects. This phenomenon affects the accuracy of your IR image. Your thermal imaging camera should be able to adjust parameters for high accuracy and consistency. For best results, look for a thermal camera that meets or exceeds +/- 2% (or 3.6°F) accuracy.

Short wavelength cameras: Short wavelength thermal imaging cameras capture infrared wavelengths in the range of 0.9 to 1.7 microns. These cameras have a high resolution as compared to the visible light spectrum in terms of shadow contrast and detail.

While selecting an infrared imaging camera, you should consider parameters such as focus, resolution, lens, temperature range, color palettes, and in-built tools for reflected temperatures and emissivity. Thanks to advances in technology, thermal imaging has become more affordable, easier to use and suitable for a variety of industrial and commercial applications.

It’s interesting to know that there are different kinds of wavelengths available when choosing a thermal surveillance camera. I’m thinking about having some installed in my property soon because one of the houses two blocks from where I live was robbed recently. I think that’s a wake-up call that I should take the security of my home seriously.