Schlieren imaging – a less known visualization method – makes it possible to visualize what’s the typically invisible. It makes it possible to capture changes in flow such as heat rising and cold air sinking. It can capture vapors and sound waves. The resulting images appear almost half informational and half art form.

Schlieren imaging is far from a new technique. There is evidence of Robert Hooke and Christiaan Huygens observing Schlieren effects dating back to the 1600s. However, at that period the technology was not developed enough for the method to be obviously useful. In the mid-1800s Leon Foucault used the knife-edge method for visualizing airflow for telescope mirrors. Foucault tests can quickly reveal if a mirror or lens causes spherical aberration by comparing the distribution of dark and light regions in the resulting image. The knife edge is part of the Schlieren setup. Although Foucault contributed greatly to the technique, the first to recognize Schlieren imaging as a new technique was August Toepler. He later used it along with Ludwig Boltzmann to image sound waves. 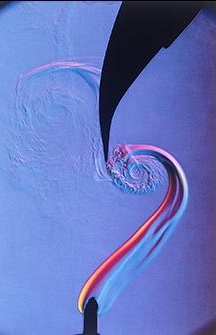 The hot air coming off an alcohol lamp can be seen in this Schlieren image. Courtesy of MIT

Though there is no hard and fast rule for what qualifies as a Schlieren setup, the following is a common way to set up a simple Schlieren imaging system. Some setups use refractive elements, but the one described below uses a reflective one. A light source is directed at a mirror on-axis two focal lengths away from the source. A slit should be in front of the light source to encourage parallel ray propagation towards the mirror. The parallel rays will pass through the area of changing airflow/where the object is, depending on what is being imaged. The mirror reflects the rays, and its focus will need to be directed into a camera lens. Because of this, the mirror will ideally have tip-tilt adjustments.

A diagram of the Schlieren imaging setup being described. Courtesy of MIT

The setup after the reflection involves a knife blade or a sharp edge that must be placed at the mirror’s focus. It should be positioned so the edge is initially aligned with the center of the focus spot. Recall that the light source was placed two focal lengths away from the mirror, and the knife blade is positioned at the focus, so the source and the blade should be aligned in the same plane. The knife acts as the stop blocking half the focused light. If the intensity of the image does not match the desired intensity, adjust the amount of the focus the knife blade is blocking. Note that moving the blade edge from the center may cause non-uniform darkening or brightening of the image. Once that is accomplished, ensure the light is being directed into the camera lens. Then Schlieren imaging can begin! Place objects in front of the mirror or disturb the air in the same area. The effects should be able to be captured by the camera.

The theory driving Schlieren imaging has to do with the law of refraction and Fourier optics. Schlieren imaging is related to the first derivative of the refractive index. The object changes the surrounding air density (whether it be hot, cold, displaced, etc.), leading to refractive index changes. The differing indices cause light to be bent according to the law of refraction. When the bent rays hit the knife blade at the focal plane, each uninhibited ray maps the information contained in the image. Since the atmospheric densities are different, this causes brighter and darker areas to be image corresponding to the fluid density gradients. These deviations are only imaged when they occur normal to the knife blade.

Schlieren imaging is used for analysis in various fields. Its versatility lies in that it can provide a quick visual cue of what is happening without interfering with the system. As would be expected, it proves useful in fluid mechanics imaging shockwaves. Ballistics and aerodynamics are prime examples of how Schlieren makes it easy to see how streamlined a system is. Schlieren imaging has been used to image heat transfer from plants in greenhouse environments. It can also be used for material analysis. Discrepancies and imperfections in a surface will cause the light to deviate, creating bright or dark spots in the image, thus revealing irregularities. Shockwaves can be clearly seen in this image of a supersonic jet. Courtesy of NASA

Schlieren imaging is traditionally more of a qualitative approach, as it is hard to quantify the effects captured. However, some have used methods to quantitatively express the results. There is a synthetic schlieren imaging technique that uses a periodic pattern as the background for the object. The distortion of the pattern in the image due to the atmospheric effects is assessed in a manner to “measure” the disturbances caused by the differences in indices.

Shadowgraphs can be as simple as a light source, object, and camera. Often, they will include the object plane sandwiched between an objective lens and illumination lens. A source will be directed through the illumination lens, reach the object plane, pass through the objective lens, and then be detected by the camera.  They produce images with bright backgrounds and darker regions where the indices change. Shadowgraphy is best suited for when the differences in the indices are large.

Schlieren imaging is a helpful supplement to see what is going on with fluid flow or heat transfer in a system. Along with Shadowgraph imaging they offer techniques for visualizing what’s not visible to a naked eye. What other optical visualization techniques do you know? Please let us know in the comments section below.