Light: An overview of various characteristics of electromagnetic waves

In grade school, we have all learned that our universe is made up of three elementary particles: protons, electrons, and neutrons. Most don’t know that there is a total of 40 elementary species of elementary particles. In addition, today scientists are conducting active research on particles that make up the elementary particles. These particles are organized and can be found in a tabular form, known as the Standard Model. The branch of physics that deals with understanding the interaction of such particles is known as particle physics. Due to the dual wave-particle nature of light, it becomes difficult for scientists to include light in the standard model. However, one of the puzzling characteristics of light is its ability to interact with particles, such as electrons. Such interaction can be understood by studying the Photoelectric Effect.

Long before the particle-wave nature of light came into existence, it was understood widely in the scientific community that light behaves solely as a wave. This is mainly because light (electromagnetic wave) has specific wavelengths, frequencies and periods, which are fundamental characteristics of a wave. For example, in the electromagnetic spectrum, radio waves have a much longer wavelength when compared to the wavelength of gamma rays. The thought that light can be treated as a packet of particles was alien to them. In the 19th century, physics came up with the theory of Photoelectric Effect. The theory stated that if light is treated as particles, then it can interact with matter. More specifically, if light particles, or photons, are given enough energy, then they will scatter electrons off of the surface of metals. 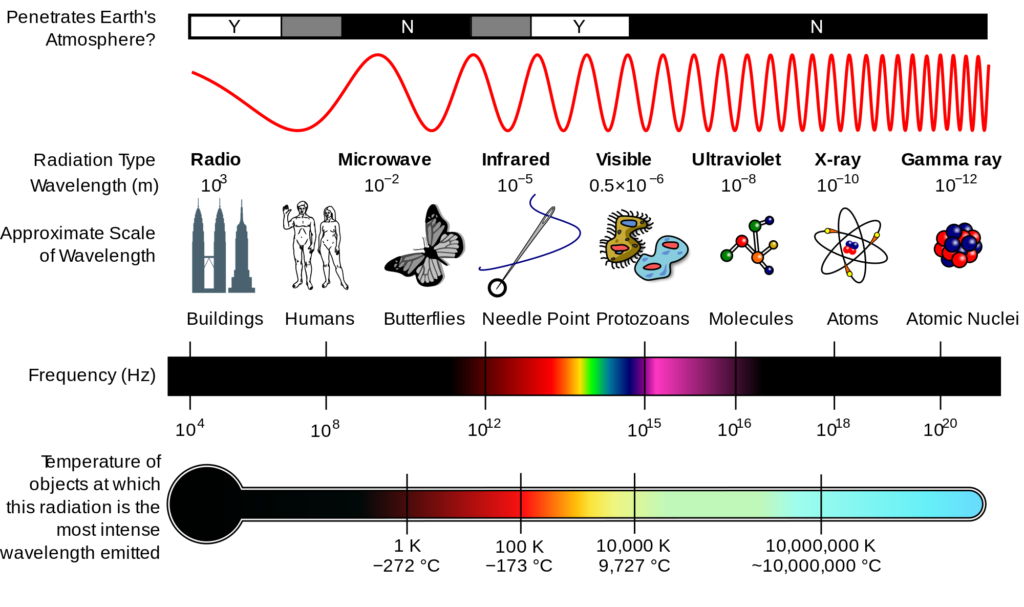 Light has wave-like properties because it has an associated wavelength. The Electromagnetic Spectrum gives an overview of all electromagnetic waves (ex: radio, infrared, gamma, etc.) and shows that visible light has specified wavelengths.

All metals have what is known as the work function, which is essentially the minimum kinetic energy needed to scatter electrons from their surface. The theory of photoelectric effect states that if the energy of incident photons is greater than the work function of a metal, then the electrons will get scattered. Max Planck came up with an equation that defines the kinetic energy of photons (KE = hv), where h is the Planck’s constant and v is the frequency of photons. This equation basically shone light in the particle-wave duality nature of light. Using Planck’s Equation, physicists stated that every metal has a threshold frequency. They then suggested that the number electrons scattered will depend on how much greater the frequency of light is in comparison to the threshold frequency. For example, purple light will scatter more electrons than red light. 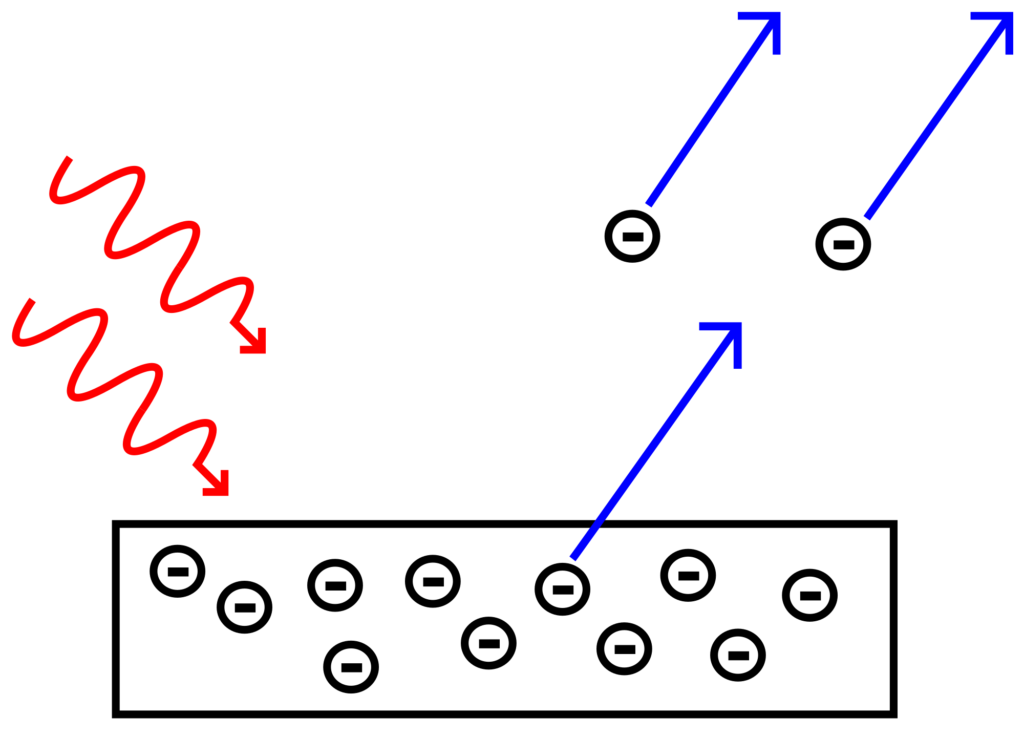 This illustration gives an informative overview of the Photoelectric Effect. In summary, when energetic photons collide with electrons on metals’ surface, they transfer part of their energy to the electrons and that leads them to scatter.

So far, we have been talking about a case where a photon transfers part of its energy to an electron. However, the process when an electron collides with a photon, transferring part of its energy, is called Compton Scattering. We know that the momentum  of two particles is conserved when they collide inelastically. Hence, when treating light as photons, we can apply the conservation laws to the system. In particular, when an electron collides with a photon, it recoils and transfers part of its kinetic energy to the photon. In order to figure out the wavelength or the angle of deflected photon, Arthur Holly Compton conducted the experiment and published his results in the Physical Review in the form of an equation.

So far we have been discussing that light can be treated as either a wave or a particle, however, De Broglie argued that if light can have this dual nature then matter can also exhibit wave like properties. As a result, De Broglie came up with an expression that calculates the wavelength of matter (or anything with mass associated). Knowing either the momentum or mass and velocity of a particle, we can find out its wavelength. De Broglie’s discovery of matter exhibiting wave-like properties was a breakthrough because it essentially gave birth to quantum mechanics!

We have an intuition that electromagnetic waves do not alter their characteristics when passing through different medians. However, according to the laws of reflection and refraction, the intensity and wavelength of such waves change when passing through different media. More specifically, law of reflection states that when electromagnetic waves come in contact with a different medium (ex: water), some proportion of its intensity reflects at an angle that is identical to the incident angle. Similarly, the law of refraction states that some proportion of the waves’ intensity pass through the medium at an angle. This phenomenon can be better understood by consulting the Snell’s Law.

As we have seen, light is not simply something illuminating the dark sky or lightening a room; it possesses characteristics that helps us understand the dynamics of the universe. In this article, we have discussed that light isn’t simply a packet of wave but possesses particle-like characteristics. In fact, Newton’s laws could equally be applied to light as they do to other particles if the relativistic and quantum effects were neglected. Inspired by light, De Broglie came up with his own hypothesis about matter possessing wave-like properties. His hypothesis gave rise to understanding the wave functions of sub-atomic particles (and other quantum mechanical concepts).

I thinkthink, in the lights photon, the photon is the negative wave crest of cosmic oceanic free electron’s quantised chain of llnier beads manifested by the bodies surface vibrations’ impact. As such, the photon is the grouped bundle of electro’s only in multiple polarity.
Being so,the electron scattering of metals must be from the bursting of the photons of electron bolus only at certain threshold. Because, you see, ironically,the kinetic energy of the emitted electron varies totally connected with the frequencies of the incident light’s photons only, not at all with metal metals surface vibration.
It is not that children’s game to remove the electron from an atomic bond.It will amount to the nuclear fission. It is easier to write or claim,but not that easier to make it to occur.
Hence, This only must be.1)The photon is the grouped wave crest free electrons.2)What we observe as electron emissions is from incident photons onlly,not from the metal.3)The photon is the wave particle of oceanic cosmetic free electron as it’s medium.(of light wave)
Thank you ,
M.John Xavier