The first radar systems were developed in 1935 by the German military. The term RADAR (Radio Detection And Ranging) was coined in 1940 by the U.S. navy. It was used during WWII to detect missiles, ships, aircraft, and terrain. Since then, more advanced technologies have emerge such as LiDAR and LADAR. LiDAR stands for Light Detection And Ranging, while LADAR stands for Laser Detection And Ranging. Some companies use these terms interchangeably. But a big distinction between these two systems are the size of their targets. LADAR is for bigger range surface sensing, like for mapping terrain or atmosphere. On the other hand, LiDAR is used for sensing small volume, concentrated targets (e.g. vehicles).

LiDAR and LADAR are remote sensing technologies that are much like regular RADAR. One similarity is in their function for measuring distances between objects and making 3-D maps of their targets. Some fundamental differences are that while radar uses Radio Frequency electromagnetic waves, LiDAR and LADAR systems use the visible and infared sections of the light spectrum. Because the wavelengths of visible light are shorter than radio light, spectral resolution is much higher in LADAR than RADAR.

This makes LADAR a clear choice for modern 3-D mapping. In today’s article we will discuss the use of LADAR for two different 3-D direct detection active imaging technologies/techniques.

Scanned laser radar technologies work by a laser that generates an optical (visible spectrum) signal pulse. This pulse is created such that it has low divergence. Then a scanner directs the pulse towards the targeted area and some of the incident light will be reflected/ back-scattered back to the device. This light is collected optically into a photosensitive component (like a photodiode). By way of the photosensitive component, the optical signal will turn into an electrical signal. Next, this signal is analyzed and filtered, and the round trip time it took to hit the target and come back can be found. Finally, with the round-trip time and the speed of light, the distance from sensor to the object can be calculated. For a more complete picture of a large area, the system will hit more targets and repeat the calculations. 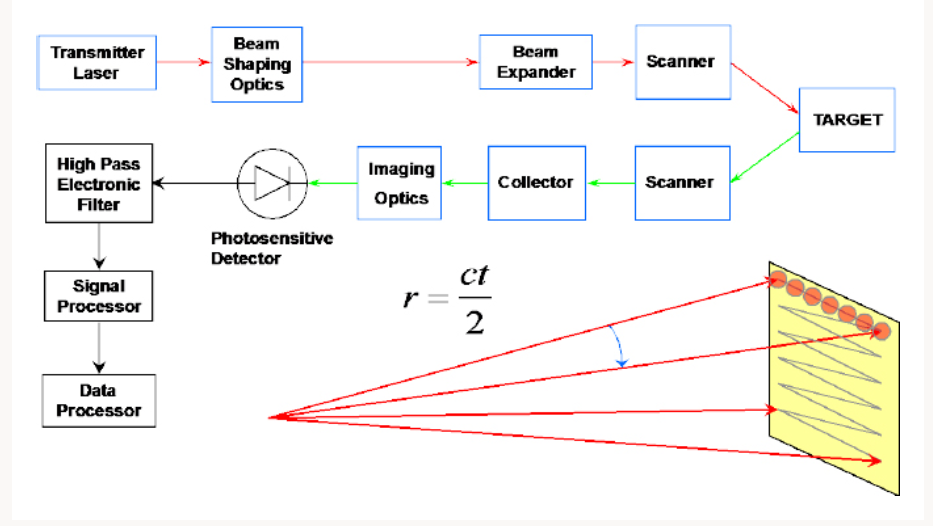 The target data points are chosen in certain patterns, such as line or raster patterns. Some factors to take into consideration here are the angles of the signals, and the orientation of the sensor. From the data target pattern, these factors, and some trigonometric coordinate transformations, we can find the Cartesian coordinates of the targeted areas. This produces a high-resolution topographic map of the larger scanned area.

“Flying spot” scanned systems are one type of scanning 3-D radar technology. Their main purpose is for commercial airborne and ground-based topographic mapping. Most of these systems use just one photosensitive component to receive signals. That is because multiple detectors systems are expensive. They are not suitable for military usage because this technology requires several passes over the area, and typically need to be close to the target/ground. However, stealth is important in the military! Therefore, other methods must be used to create complete pictures more efficiently, such as in 3-D flash imaging. 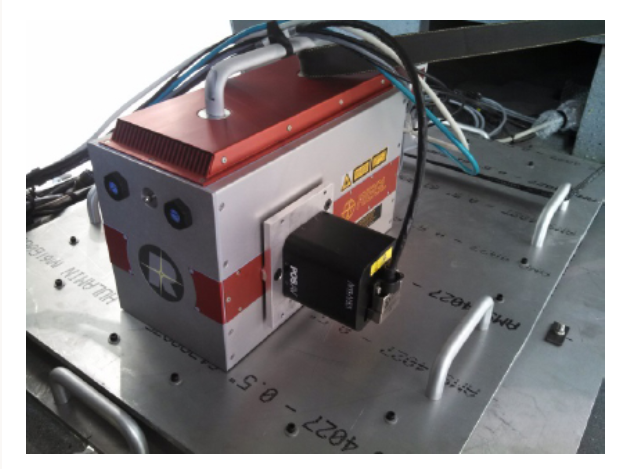 The flash imaging method works by flooding the target area with light (many spots/points), and the reflected/ back-scattered light is collected by the receiver. The received signal is projected onto a 2-D array. Next, the 2-D map must be calculated into a 3-D map. Now a very similar process to the scanning 3-D radar systems occurs. To calculate the topographical map, factors such as the location and orientation of the sensors must be known. Finally, the 3-D map is born out of each calculated range. 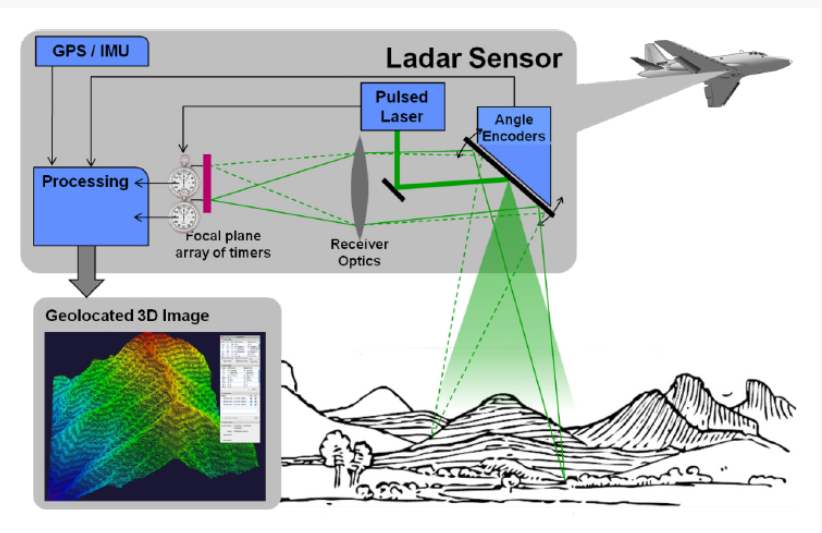 Diagram of 3-D flash imaging of a large area of terrain.
Courtesy of Lincoln Laboratory MIT, 2011.

Airplanes and moving vehicles typically take large area snapshots. As we know, motion causes image blur. Thus, it is best to take the image at a high frequency (less than 30 Hz)/ very short amount of time. Some other factors that are different from scanning systems are that multiple detectors must to used to receive signals. These detectors are put into arrays where factors such as spacing and phase affect the map calculations.

Additionally, the system receives a weaker signal because the returning energy signal is divided among multiple devices. In order to combat this weakness, high power light should be transmitted. Alternatively, the receivers should be tuned to be very sensitive. For example, this can be achieved by using Avalanche Photodiodes (APDs) or amplifiers to increase the power of the return signal. Further, Linear mode and Geiger mode amplifiers can also be used. First, the advantage of linear mode APD detectors is that the number of photons in the received signal has a linear relationship to the amplitude of the output signal. On the other hand, Geiger mode APD detectors have large gain even if the received signal is weak.

LADAR systems are advantageous to applications for precise detection of significant geographic areas. They allow high-resolution angle resolution and create highly data dense 3-D maps. Some emerging technologies in the works include multiple-input/ multiple-output (MIMO) imaging, femtosecond scale sources, and some in the quantum technologies domain. [1]

Did you know FindLight has a selection of Lasers for ranging and radar, including Eye-Safe Lasers?