In 2007, German officials pledged that the country would reduce greenhouse gas emissions 40% by the year 2020. The country dedicated $580 billion and passed over one-hundred measures to overhaul the energy industry. Their initiative has so far yielded undeniably impressive results; nonetheless, they are going to come up short, as the Climate Protection Report projects a 32% decrease in greenhouse gas emissions by the target year. Germany’s transition to renewable energy sources has made a significant impact on emission rates, but critics say there is one major contributor that did not keep up: the automobile industry. In fact, transport is the only sector in Germany’s economy that has seen no progress in emission reduction since 1990.

The Need for a Laser Ignition System

This problem is of course not unique to Germany. A 2010 NASA study found that motor vehicles are the single greatest contributor to atmospheric warming in the world. Clearly, global efforts to slow climate change must involve eco-friendly improvements to modern automobiles. Electric cars provide a clean alternative, but there has been little improvement in existing gas-fueled vehicles. The ignition source within the petrol engine of these vehicles plays a crucial role in its performance, efficiency, and emissions. A collaborative team with INFLPR and the Polytechnic University of Bucharest presents an advanced ignition method using lasers for more efficient combustion in an April issue of Optics Express.

Spark plugs use high-voltage electricity to ignite a spark in an engine’s combustion chamber. Courtesy of Champion Auto Parts

The spark plug is a common combustion ignition source in gas-fueled vehicles. Spark plugs sit at the top of the cylinder head where they spark and ignite the mixture of compressed air and fuel to force a piston back down to create power. The device has an insulated central electrode connected to an ignition coil via a heavily insulated wire. A grounded terminal on the base of the plug then forms a spark gap inside the cylinder. The current jumps the gap at very high voltages, creating a spark that ignites the fuel and air mixture. 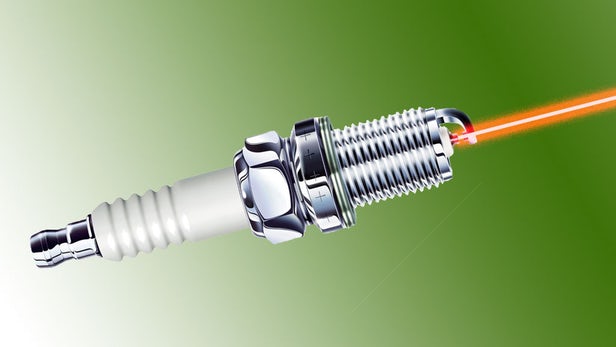 The research team proposes a laser ignition method that could potentially replace the standard spark plug ignition system. Laser ignition systems project a beam into the engine cylinder through an optical window on the cylinder wall. These devices do not require an electrode, which allows the flame kernel to develop without quenching. Laser ignition also provides the opportunity to increase engine efficiency by manipulating the beam (and therefore the spark) to different points within the chamber. Lastly, the systems can obtain spatial control over ignition by targeting several points at once with one or more beams. Here we examine how one research team’s laser ignition system could affect the performance, efficiency, and emission rates of a V4 engine.

The left figure portrays the block diagram of the setup. The right figure shows the V4 engine with the laser ignition system. Courtesy of Optics Express

The laser ignition system was designed to match the compact dimensions and structure of a spark plug system as closely as possible. Each of the four electric spark plugs in a V4 engine are replaced with a laser source as seen above. The researchers utilized a composite Nd:YAG/Cr4+:YAG ceramic medium in a monolithic resonator to keep the build exceptionally compact: the total length of the laser is eleven millimeters. The team created the resonator by coating the free surface of the Nd:YAG with a mirror of high reflectivity at the lasing wavelength (1.06 microns) and high transmission at the pump wavelength (.807 microns).

The pump used fiber coupled diode lasers in quasi-cw mode. The light delivered with the fiber couples into the Nd:YAG with an achromatic lens of 6 millimeter focal length. This laser spark plug yielded pulses with a peak power of almost 5 Megawatts. This output beam is collimated and focused such that the point of ignition in the combustion chamber correlates to that of the classic spark plug. The beam is sent into the engine cylinder through a sapphire optical window.

The research team mounted a four-cylinder multipoint fuel passenger car engine to their test bench with the four laser spark plugs installed in place of the standard electric plugs. The laser ignition system only triggers one pulse per cycle for fair comparison to the electric ignition system. The test bench also includes necessary equipment to modify and measure relevant experimental parameters including ignition times, air-fuel ratios, brake torque, in-cylinder pressures, and others.

The research team conducted a substantial amount of tests with their laser ignition system. Below is a look into some of the most significant results, but a complete summary is available in the Optics Express journal here.

Fuel does not completely burn the instant a spark fires; the combustion gases within the chamber take time to expand. The angular speed of the engine changes the time frame over which burning and expansion optimally occur. Ignition timing therefore refers to the timing relative to the piston crankshaft angle at the release of a spark, expressed as a certain angle. Different air-fuel ratios will also change the position of the optimum ignition timing.

The research team claims that the BSFC (brake-specific fuel consumption ) is “one of the most significant parameters characterizing the engine efficiency.” Manufacturers determine this parameter by diving the fuel mass flow rate by the engine output power, therefore reflecting overall fuel efficiency. Data at the optimum timings determined in the break power experiment show that the BSFC of the λ~1 and λ~1.25 mixtures decreased by 7.4% and 21% respectively when using the laser ignition system.

Emission measurements are the most significant indicator of direct environmental impact. The researchers tested their systems for total unburned hydrocarbon (THC), carbon monoxide (CO), and nitrogen oxides (NOx) emissions. Laser ignition measurements show CO emissions for λ~1 decreased by 20% and λ~1.25 decreased by 30% compared to the electrical ignition method. THC levels with the stoichiometric mixture remained about the same and the lean mixture emissions decreased by about 6%.

NOx  emissions prove to be the biggest obstacle in integrating the team’s laser ignition systems into modern automobiles. NOx formation depends on the oxygen level available for reaction, the maximum temperature level, and the combustion duration. This presents an especially complex challenge. High temperatures produce excess amounts of NOx gases but lower temperatures will not create combustion. The researcher team’s results show that replacing the electric ignition with their laser ignition increased NOx  emission levels 46% with the stoichiometric mixture and 287% with the lean mixture.

Automobiles must keep up with eco-friendly technological advancements to significantly curb climate change. A research team in Romania presents their contribution, a laser ignition source, to significantly improve the performance, efficiency, and emission rates of modern vehicles., Their results show great promise in areas like fuel efficiency and break power in comparison with the standard electric spark plug system; however, the dramatic increase in NOx emission should clearly be of concern. Regardless, with more time and more data a fully operational engine with laser ignition could drastically change the environmental impact of modern vehicles.

For more information on this ignition method, find the article here.

Thank you very much for your interest in our work. This research was a collaboration between INFLPR and University ‘Politehnica’ of Bucharest (from Romania), and not from Budapest (Hungary). I therefore kindly ask you to make this correction.

Again, thank you for considering our results worthy of being mentioned on your web page.

Pavel, thanks a lot for your comment and for noticing this. We have corrected. We will look forward to seeing more comments from you. Best, Hrant Seferyan