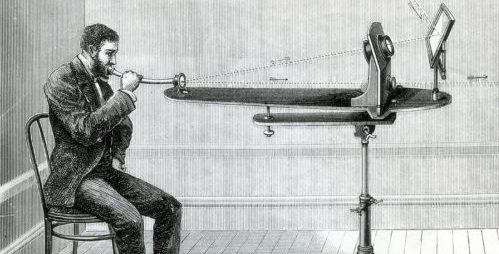 Alexander Graham Bell was experimenting with his photophone when he discovered he could produce sound via the absorption of light. Today we examine how this effect can transmit sound through the air to a target with no external receiver, a process called photoacoustic communication. Courtesy of KU LEUVEN.

Introduction to the Photoacoustic Effect

Alexander Graham Bell, a prolific inventor most celebrated for inventing the telephone, first observed the photoacoustic effect in 1880. Bell was experimenting with methods of sound transmission when he realized he could create sound waves with a modulated beam of light.  Over one hundred years later, scientists continue to exploit the phenomenon in a long list of applications including absorption spectroscopy, immunoassay techniques, and photosynthesis research.

The photoacoustic effect describes how light absorption within a material can generate sound waves. A successful photoacoustic experiment requires either a modulated, continuous wave beam or a pulsed beam. Photothermal processes are the primary mechanism that produce the photoacoustic effect. The material absorbs radiation in the form of heat energy, causing the size of the sample to fluctuate. Intensity is time-dependent due to the modulated or pulsed nature of the beam. This causes the sample to expand and contract with rising and falling temperatures. Resulting rapid pressure variations produce a sound wave.

Sound-transferring system requires three key elements: a source to generate the sound, a medium to transfer the sound, and a receiver to translate the sound. The medium determines how efficiently sound transfers from the source to receiver. In the case of photoacoustic communication, encoded light is absorbed by water vapor in the air (the medium) and transformed into an acoustic signal via the photoacoustic effect. This sound then travels to the nearby ear of the receiver.

A research team with the Lincoln Laboratory at Massachusetts Institute of Technology present two techniques of photoacoustic communication. Both methods use light to successfully transmit an audible message through the air to a target with no external receiver. The laser-driven system is so precise that the audible message is heard only by the intended target. The team suggests their methods open up many possibilities including direct communication across noisy rooms or warning individuals of nearby danger. 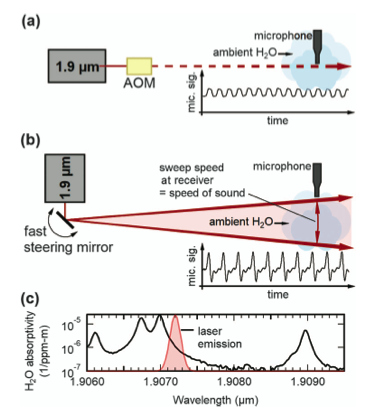 Figures (a) and (b) portray a traditional technique and a dynamic technique respectively. Figure (c) depicts water absorptivity near the chosen wavelength. Courtesy of Optics Letters

Their paper, published in Optics Letters, outlines two demonstrations of localized photoacoustic communication with different types of laser output: the first method involves a modulated CW beam while the second method relies on pulsed emission. The methods must produce sound greater than zero decibels at distances greater than 2.5 meters to be considered successful.

Both methods utilized the same source: a 1.9702 micron thulium-based fiber laser. The laser wavelength had to be both capable of long-range communication and safe for the eyes of the receiver. The team chose light in the near-infrared range because it is strongly absorbed by water. This allows for effective travel and minimal potential for thermal damage. Both use a microphone to convert output sound into an electric signal for decibel measurement. It is also extremely important to consider how efficiently the optical energy can convert to acoustic energy. The relationship between the output sound pressure and optical parameters is given as:

This equation, however, is only valid when the beam diameter, D, is larger than the characteristic acoustic size, vTpulse. This is known as the large-beam limit. The small-beam limit where the diameter is less than the acoustic size the equation becomes:

Both equations are essential in creating a photoacoustic communications system.

The Setups: Methods 1 and 2

Method 1, which the Lincoln Lab team refers to as “traditional” photoacoustic communication, uses an acousto-optic modulator (AOM) to obtain a square wave with a 50% duty cycle. Researchers determine the relative safety of a beam by measuring the laser energy per unit area, so the diameter of the beam becomes particularly important. The team modulates the beam over a range of audible/ultrasonic frequencies and eye-safe D values. Measurements of the output sound pressure levels therefore provide “safe” optical energy conversion efficiencies.

Method 2, the “dynamic” photoacoustic communication approach, uses a fast-steering mirror to sweep the beam such that the laser spot travels in an arch at the speed of sound through the ambient water vapor. This causes acoustic waves to constructively interfere with each other, thereby producing an amplified, pulsed acoustic signal. 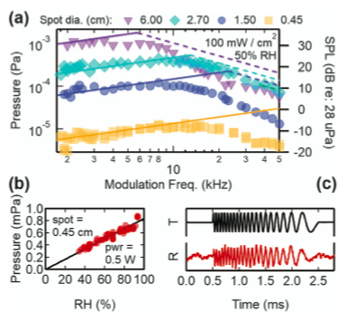 (a) Transfer functions for various spot sizes (b) Photoacoustic signal over relative humidity (c) Example of a photoacoustic communication waveform for sent (T) and received (R). Courtesy of Optics Letters.

Data from the traditional approach presents several significant trends. Each D value (spot diameter) has a corresponding cutoff frequency; pressure begins to decline at frequency values above the cutoff. We begin to see sound pressure levels in the audible range (> 0 dB) when spot diameter is greater than one centimeter. The researchers also observed photoacoustic signal strength over a range of relative humidities. This plot shows the expected linear relationship with maximum pressure at 100% relative humidity.

The dynamic approach first requires an in-depth look at how the velocity of the sweeping mirror affects photoacoustic signal. The team frames their data as a function of the Mach number. Here the Mach number (M) represents the ratio of the speed of the swept laser beam to the speed of sound. Where M>1, a lag grows between leading compression and trailing rarefaction of the photoacoustic signal. This shows that the signal widens (temporally) when the swept laser is traveling faster than the speed of sound. The team notes that the dynamic method produced signal that was easily audible to the naked ear despite the waveform. 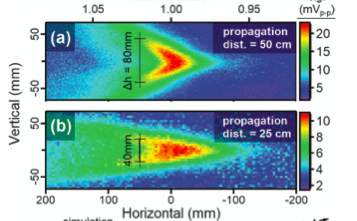 We must use this approach to precisely deliver sound to a device-free target. Amplification and propagation along the laser sweep direction increase local sound levels such that the personalized signal can only be heard at a certain distance from the transmitter. The team analyzed the signal’s spatial extent by using a microphone to measure the signal plane perpendicular to sweep direction. They then acquired data at various sweep speeds and propagation distances (distance between the microphone and location of the laser sweep.) Separation distance of the signal increased linearly with both Mach number and propagation distance.

The research team with Lincoln Lab presented two methods to send an audible message directly to a target with no receiver. Both techniques create audible sound via the photoacoustic effect through atmospheric water vapor. Their dynamic approach provides greatly amplified signal that can be precisely localized near the ear of the target. Theirs is the first system of its kind to use a laser safe for the eyes and skin, moving the theory of photoacoustic communication from the lab to the real world.

You can find a detailed report of their process and results here.