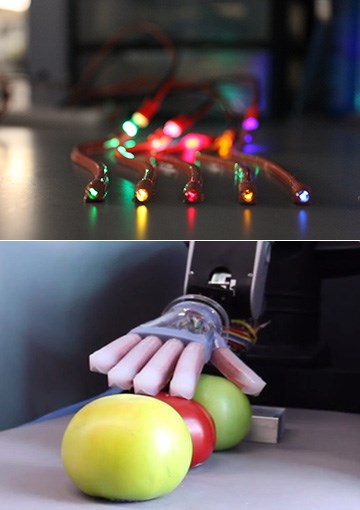 Bionic limbs exist in a number of books, movies, and TV shows. Science fiction fans will remember the Steve Austin’s Bionic Arm from his role in The Six Million Dollar Man. Even more well known is Luke Skywalker’s robotic hand from Star Wars. In the past, bionic limbs were too expensive and worked too slowly. However, this may soon change due to new research. 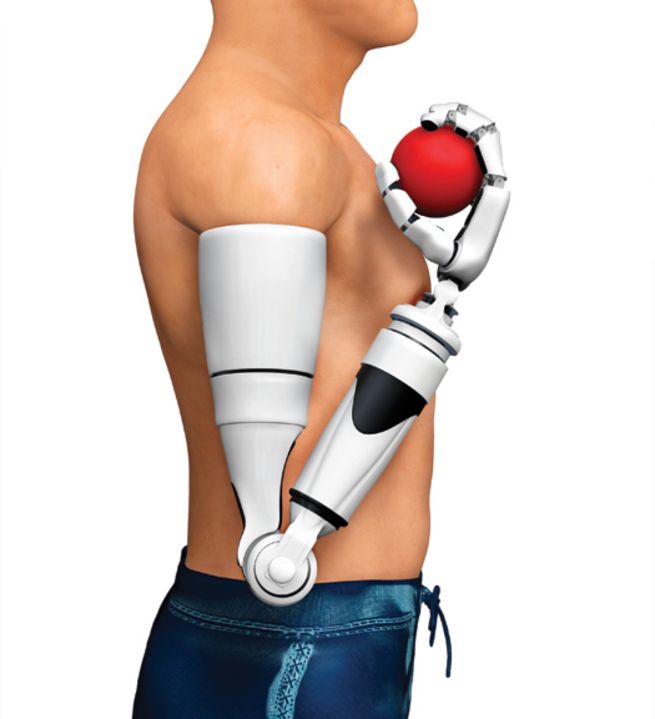 Concept of a bionic limb with artificial nerves. Using optical fibers, the gap between real and artificial limbs can be bridged. Image courtesy of popularsci.com.

Optical detectors have always been used for a number of purposes. In recent years scientists have studied how to use fiber optics in bionic limbs. These fiber optics improve communication between prosthetics and the brain. Current prosthetic devices connect artificial limbs to other parts of the body. As a result, amputees often move indirectly when they want to make certain things happen.

Additionally, this increases the possibility of the limbs being damaged. This occurs because the users don’t realize when they hit something. Furthermore, the metal normally used for these limbs wears down, and they cut too much into human skin. However, optical fibers implanted around the nerves can restore touch. Therefore, users can feel different sensations including heat, cold, and pain.

Early in 2005, researchers at Vanderbilt University realized that infrared light triggers nerves. In 2010, there were a lot of discussions about how the Defense Advanced Research Projects Agency (DARPA) was funding the Neurophotonics Research Center. Their goal was to create an optical link so that the brain could communicate directly with artificial limbs.  Sensors built into the cables connect living tissue at different points with a computer system connected to the human nervous system.

According to early research, fiber optics is better than other possibilities because fiber optic elements are “more flesh-friendly than rigid electronics, carrying 10 times as much data as their electrical counterparts.” This technology can also potentially be used for healing other injuries. Since the optical fibers can communicate directly with the artificial limbs, they can even “patch the spinal cord above and below a spinal injury.”

As a result, paralysis patients could walk again. These artificial limbs could even treat an array of neurological disorders. Amputees regain their sense of touch, and the bionic limbs are more resilient to damage than past bionics. 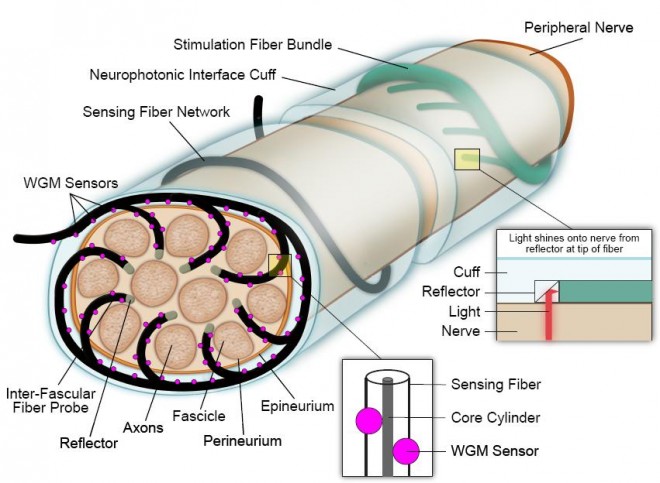 Optical signal transmissions for a sense of realism: How it all works and benefits of the technology

As discuss earlier, DARPA researchers have used lasers to make the limbs truly lifelike. The limbs work by attaching an optical cable to the severed nerves at one end, and to the stump at the other. These new bionic limbs offer several advantages compared to past prosthetics.

Benefits of the new bionic limbs

As per the early research, there are a number of benefits to consider with this way of designing prosthetic limbs. The sensors are “compatible with the body’s tissues, can transmit a ton of signals at a single time and even stimulate a single neuron“. This design is also more compatible with human tissue.

Furthermore, the amputees spend “less time learning how to work with the prosthetics, and more time using them“. In addition to this, these new devices can increase the number of signals transmitted from one or maybe two, into thousands of signals. Lastly, the human immune system does not reject or destroy this fiber optic technology. As a result, the technology is more durable and works faster.

Simplifying the explanation of the brain interface

With all of these innovations, one of the most important is the kinesthetic feedback. This is the series of signals from the nervous system that let the limbs feel presence, touch, and motion. According to an article written on endgadget, the key is creating a two-way interface at reinnervation sites where amputated nerves have been redirected to remaining muscles, thus tricking the brain into thinking that the limb is really there.

There has been a lot of time and effort invested into using laser signal transmissions and fiber optic cables for improving the bionic limbs. However, none of it would have been worthwhile if scientists did not test the technology. A number of experiments have been conducted in recent years to see how well these limbs actually work. Some examples include picking up a coffee mug, or shooting a bow and arrow.

In the case of the engineering team lead by Robert Shepherd of Cornell University (image shown at the top of the page), touch was the key factor being tested. Famously referred to as “The tomato test” and shown on YouTube, tomatoes of varying ripeness were lined up. The robotic hand pressed down on the three tomatoes and was able to pick up the ripest one in multiple tries using the optical loss read in the waveguide. See the experiment shown on YouTube here.

There have even been talks about design limbs that grow with the user. Consequently, technology and research with bionic limbs is continuously improving, offering some people a chance to return something that they have lost.