Optical Vehicle to Vehicle Communication System: How It Works

Vehicle-to-vehicle (V2V) communication system enables vehicles to wirelessly exchange information about their speed, location, and traffic information. The technology behind V2V communication allows vehicles to broadcast and receive omni-directional messages. The technology can then employ visual, tactile, and audible alerts to warn drivers and allow them to take action to avoid crashes. V2V communication can also be effective in regulating traffic congestion by transmitting real time traffic information and providing fastest route for drivers.

Optical wireless communication (OWC) is a form of optical communication in which unguided visible, infrared, or ultraviolet light is used to carry a signal. OWC system operating in the visible band is commonly referred to as visible light communication (VLC). When V2V communication employs OWC technology, currently available crash avoidance systems, that use radars and cameras to detect collision threats, can be extended and enhanced.

OWC technology requires an optical source and an optical detector. Recently, many light emitting diode (LED) based systems have been developed because LED has a high energy efficiency and long operating life. The light intensity of LED can be modulated at high speeds in comparison with traditional lighting devices. Also, LED is inexpensive to purchase. And more importantly, LED has already been used on vehicles, such as in taillights, brake lights, headlights and traffic signals. Therefore, the LED-based V2V system is expected to be a convenient and ubiquitous communication system in the future.

On the other hand, a camera is expected to be the optical receiver for V2V technology, because it is able to provide non-interference communication capability to OWC systems due to its image sensor’s excellent spatial separation capability. Various potentials, capabilities, and advantages of the camera-based OWC system have already been reported [2]. However, only a few reports have implemented them into real automotive systems or conducted experiments under real and outdoor lighting conditions [3]. Takai et al. investigated an optical vehicle-to-vehicle (V2V) communication system using LED transmitter and camera receiver in a real automotive system. In their study, an optical communication image sensor is used in the camera receiver to be specialized for reacting to high-intensity light sources such as LEDs and facilitating LED detection. 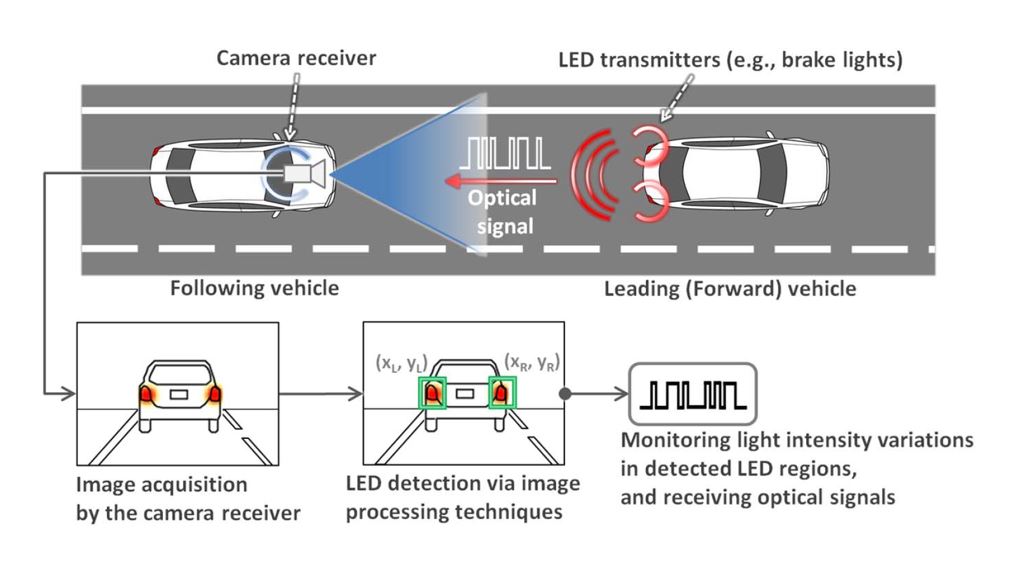 The pictures shown above present the optical V2V communication system conducted by the team: a leading vehicle has two LED array units, a controller including the PC, and a front view camera for taking view images from the front of the leading vehicle. The controller collects various vehicle internal data, such as vehicle speed, driving operation states, and distance data between the left and right side of LED arrays units.  While the camera receiver is mounted on the following vehicle; it receives optical signals and collects the following vehicle’s internal data. At the same time, the camera receiver on the following vehicle captures the images, looks for the LED regions in the captured image and skips the data of sun or street lights, via image processing techniques.

All experiments were conducted while driving outside during daytime and nighttime. To confirm the image reception performance of the system, the reception-frame-rate of the front-view image was measured. Although the send-frame-rates of the front-view image are different during the daytime and the nighttime, the image arrival rates at different lighting conditions are almost the same. Therefore, the lighting conditions have insignificant influence on reception performance.

In addition, when the following vehicle is pitched by the uneven road, packet arrival rate of the camera receiver will decrease. By an improvement of the LED detection rate, packet losses will be decreased.  Those results showed that the optical V2V communication system is capable of transmitting internal data and video data under real driving and outdoor lighting conditions.

The study mentioned above turns the optical V2V concepts into a practical automotive application. Nevertheless, there are quite a few factors obstructing the realization of optical V2V communication systems. For example, since optical signals propagate in a straight line, OWC links are easily blocked by objects which the light cannot penetrate, such as buildings and thick fog. Also, V2V does not come without cost. Early estimates suggested $100 per vehicle, though certainly that will drop with time. But even at $20 added to the cost of each vehicle, the manufacturing of millions of cars means billions of dollars need to be spent. Moreover, the development of V2V creates a serious security risk. The communication among vehicles demands regular interaction with random unknown parties, which can make the security problem harder.

V2V communication is a data exchange platform using cooperative communication among vehicles to share messages for drivers, which will facilitate active safety vehicle system development. For security in V2V communication, the network side as well as the vehicle side should be equipped with content inspection to combat intrusion, phishing, spam attacks. Before the self-driving car becomes a common tool for everyone, the challenges in V2V communication should be solved.