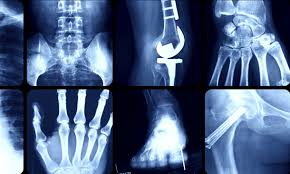 We commonly associate x-ray imaging with hospitals and broken bones, but why are x-rays the chosen source of radiation instead of visible light or electron beams? The high initial energy of x-rays allows them to completely pass through the body while encountering tissues of varying densities – absorbing into hard tissue (bone) and weakly interacting with soft tissue (organs, muscle, etc). The attenuated signal creates the characteristic black and white contrast in the final radiograph. These properties of significant penetration depth and atomic mass dependence as well as high spatial resolution make x-rays an extremely useful source in many imaging applications beyond the medical field.

X-rays, however, are difficult to focus. Their energy is so high that they will pass straight through most lenses instead of refracting like we see with visible light. It is thereby desirable to ultimately bypass the need for lenses in obtaining high-resolution, high-contrast x-ray images. Many lensless imaging techniques have proven to be effective, but almost all require high-coherence sources. Researchers at Bar-Ilan University published their solution in a February edition of Optics Express. Their approach utilizes a creative, unconventional method to obtain high-quality images: computational ghost imaging.

Standard ghost imaging uses two beams: one that “views” the object and the other that is “blind” to the object. Courtesy of Physics Today.

Conventional ghost imaging produces an image by combining information from two beam detectors. A source (typically coherent) produces a beam which immediately encounters a rotating diffuser and then splits to form two beams with identical intensity fluctuations. One of these beams propagates through or “views”  the object and then strikes a single-pixel detector; the other beam is “blind” to the object and strikes a multi-pixel detector. An image is finally reconstructed from correlation measurements between the two beams after many cycles of this process at different diffuser positions.

An alternative method of special interest to the Bar-Ilan team acquires an image with only the single-pixel detector. With this technique, computational ghost imaging, the diffuser has a known scatter distribution. A single beam then views the object and strikes the single-pixel detector. It is then possible to use the correlation between the detector’s measurements and calculated intensity fluctuations to reconstruct the image. Intensity profiles can be calculated with no preliminary multi-pixel measurements. There is no beam splitter required and the single-pixel detector is cheaper, faster, and less complex than its multi-pixel counterpart. The Bar-Ilan team presents their own strategy for successful computational ghost imaging using x-rays, a partially coherent source.

The researchers first created “masks” to fill the role of the diffuser. Each mask is meticulously designed through a series of numerical simulations to invoke known intensity and phase pattern. It is patterned such that each realization marks a different position on the mask and therefore represents unique fluctuation measurements. A series of complex calculations (which can be further explored here) leads to the intensity correlation function that can reconstruct the image after N realizations:

where IB is the intensity at the single-pixel detector and Ic is the computed intensity pattern. The researchers fabricated the masks using photolithography techniques. 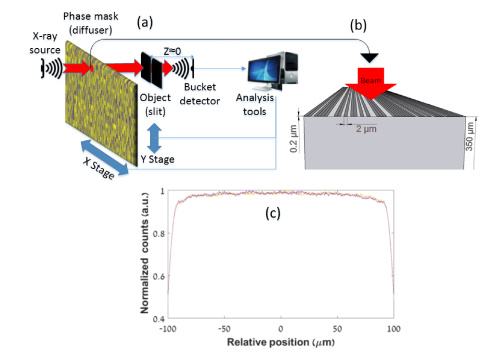 The above schematic depicts the complete experimental setup. The x-ray beam first hits a selected area of the mask which causes it to transmit with induced fluctuations based on the pattern at that point. The beam then passes through the object and hits the single-pixel detector mounted close behind it. The image is reconstructed by correlating measured intensities at the detector for different positions across the mask with calculated propagation fluctuations as described above. 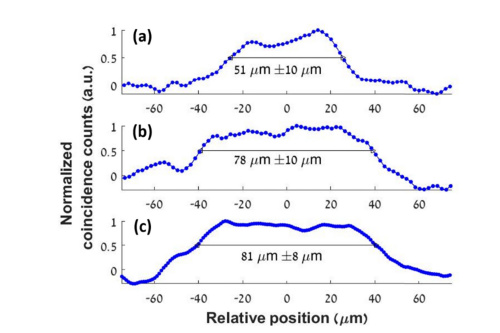 The team tested the accuracy of their computational ghost imaging system by imaging slits with widths of 50 microns and 80 microns (µm). Two different masks of different thicknesses and substrate materials verified consistency. They compared measured values from the image (determined by FWHM) to the real set spacing. Mask two measured the slits as 51 and 78µm with a 10 µm error margin. Mask one measured the 80µm slit as 81µm with an 8µm error margin.

The researchers also determined how spatial coherence length of the source affects image quality. For this investigation they simulated the same ghost imaging procedure for a 15µm slit to compare different spatial coherence lengths. They again used two masks: one mask that only changes phase and another that only changes amplitude. The amplitude mask successfully reconstructed the image even when the coherence length was smaller than the speckle size. This discovery is significant, as it suggests computed ghost imaging does not require a high coherence source to produce high-resolution images.

In their work, the Bar-Ilan team demonstrated the first observation of computational ghost imaging using an x-ray source and only a single-pixel detector. They claim contrast and spatial resolution of reconstructed images could improve by optimizing the parameters of the patterned mask features. Their method provides versatility: it is not restricted to only near-field imaging. The computational ghost imaging system is a viable option for x-ray imaging and could soon be standard practice for imaging biological samples.