A new paper details the potential use of nanowire arrays as artificial photoreceptors. The Zhongshan Hospital-affiliate team from Fudan University in Shanghai observed visual responses in blind mice fitted with these nanowire arrays. This study opens the doors for future developments in the field of subretinal prosthetic devices.

The retina is a membrane lining the back of the eyeball containing photoreceptor cells. These photoreceptors convert light into chemical and electrical signals. These signals are then relayed to the brain via the optic nerve. The two types of photoreceptors are rods and cones. Rods allow for light sensitivity and cones allow for color recognition. 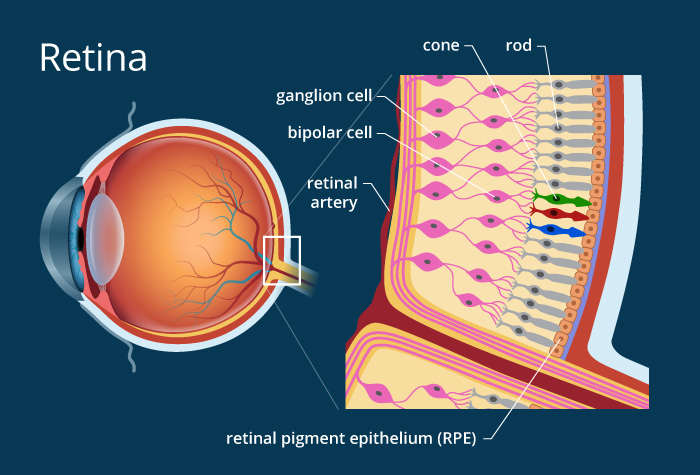 This diagram shows the retina in relation to the rest of the eye. The photoreceptors (the cones and rods) are visible. Courtesy of All About Vision.

The retina is disposed to a variety of diseases and conditions.  Age-related macular degeneration of the retina is the most prevalent cause of visual loss among the elderly. Other diseases such as diabetic retinopathy or inherited retinal degenerations such as retinitis pigmentosa are leading causes of blindness. In the United States, inherited degenerations affect 100,000 individuals nation wide. Right now, a major goal in the field of ophthalmology is to find new techniques of treatment for retinal degeneration to restore vision.

What is currently on the market for treatment of retinal degeneration?

Currently, there is no way to effectively restore loss of vision caused by retinal degeneration. For particular cases of macular degeneration, the intake of particular vitamins or minerals can slow the progression. In other cases, drugs and laser surgery can improve vision, but they cannot reverse total loss of vision.

Why are nanowire arrays promising as artificial photoreceptors?

Potential artificial photoreceptors must foremost be light sensitive. One-dimensional semiconductor nanowire arrays appear superior to their predecessors. Their highly ordered structure is more equivalent to the structure of photoreceptors, which allows for proficient photo-absorption and charge separation. Additionally, the oriented arrays can produce and carry photocurrent to depolarize neurons. Finally, the array does not require an external power supply. Therefore, the existing uniform density of photo responsive units allows for an enhanced spatial resolution.

In this particular study, gold nanoparticles coated the titanium arrays. The addition of gold amplifies the electrical field. This allows for the improvement of photo-conversion efficiency into the visible range. Nanowire arrays without the gold show decreased photo-absorption in the visible range.

Methodology of the Experiment

This study employed mice to test the effectiveness of the nanowire arrays as artificial photoreceptors. There were two populations of mice present in the study. The wild-type mice acted as a control group and had full visual capabilities. In contrast, the second population had mutations in the Pde6b and cDTA genes, which causes full degeneration of rods and cones, rendering the mice fully blind.

To test light sensitivity, the retina was exposed to UV light of varying intensities and light in the visual range of different wavelengths. First, researchers recorded activities of the retinal ganglion cells . Additionally, the team measured the pupillary light reflexes. Finally, spatial resolution was tested by measuring induced photocurrents generated by exposure to a variety of light spots. For the blind mice, these tests were performed prior to retinal surgery and at multiple time points after sub-retinal implants of the nanowire arrays. 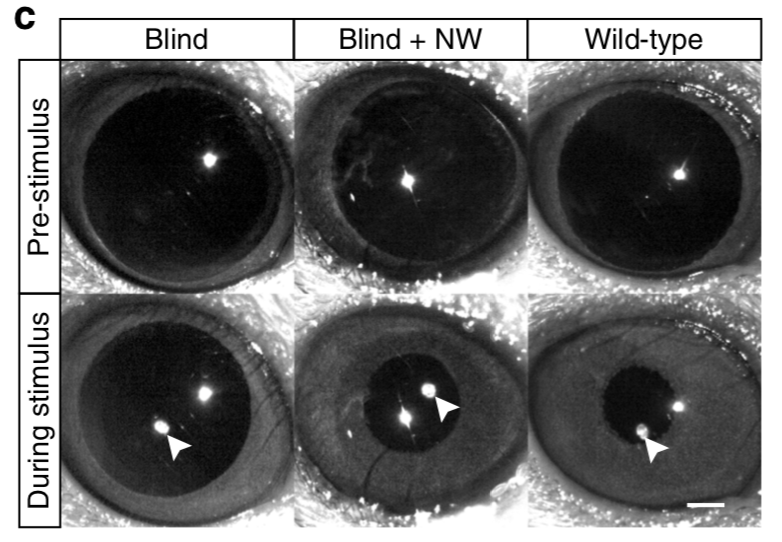 These images display the pupillary light reflexes of the blind mice, the blind mice 4-8 weeks after receiving the nanowire array implant, and the wild type mice. Courtesy of Nature Communications.

Based on the evidence presented in the paper, the Au-TiO2 nanowire arrays effectively mimic photoreceptors. The array absorbs light and produces photo-voltage. When implanted in the mice, light responses demonstrated restoration despite degenerated photoreceptors. Additionally, both the spatial resolution of around 50 micrometers and the visual field of the blind mice fitted with the arrays were similar to mice with no visual loss.

The restoration of light sensitivity in the previously blind mice demonstrates the potential success of nanowire arrays as a sub-retinal prosthetic device. In the future, modifications to the arrays could potentially allow for color recognition as well. This would require the development of different types of nanowire with varying spectral responses.

For more information on this novel development in artificial photoreceptors, you can read the paper here.