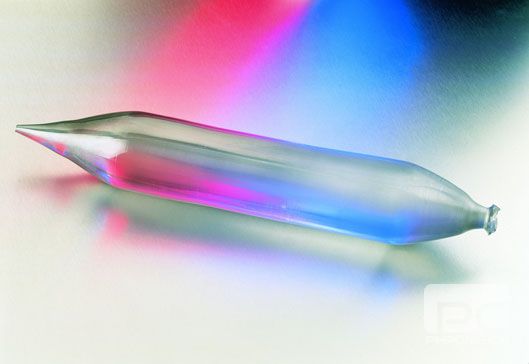 Laser crystals work as an optical gain within a laser cavity to produce a powerful and coherent light beam. Courtesy of CLaser Photonics.

How do lasers work?

This blog spends much time discussing the use and the applications of lasers, but how do they work? Lasers emit a coherent light beam from a cavity. The term “laser” is actually an acronym that stands for “light amplification by stimulated emission of radiation.” Lasers require two main features for optical amplification: a gain medium and a system to provide optical feedback. An external source of energy first runs through the gain medium to stimulate emission of electromagnetic radiation. The created beam then reflects within an optical cavity, often oscillating between opposing mirrors before emerging from the cavity along the desired direction. We identify these lasers based off of the laser gain medium. This can be a solid, gas, liquid, or semi-conductor. Laser crystals are one of the most popular mediums within the solid-state laser regime.

Laser crystals are quiet unique in their composition and are often doped with various ion types. These ions assist the process of stimulated emission within the crystal to amplify light at a cohesive wavelength. When compared with other laser mediums such as doped glasses, crystals typically have a smaller absorption and emission bandwidth, higher thermal conductivity, and higher transition cross sections. A laser’s transition cross section predicts the likelihood of an induced transition due to radiation.  A high transition cross section then correlates to a higher probability of absorption or stimulated emission. Laser crystals can also come in many different shapes. Common geometries of these crystals includes cuboid, cylindrical, and thin-disk. The shape of the crystal along with the doping density greatly influence the output laser beam. 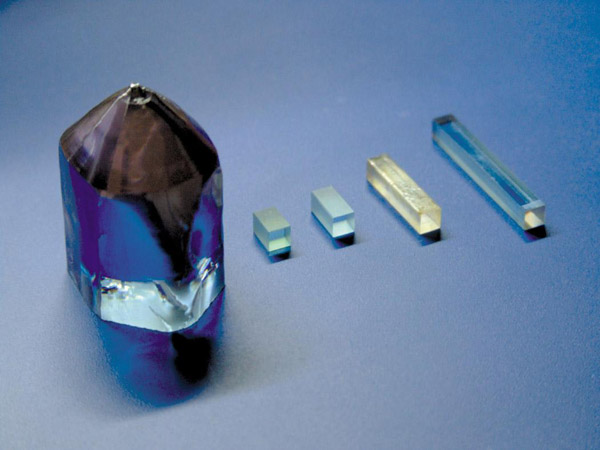 The crystals that act as the host for doping ions are often referred to as “host crystals”. These host crystals are required to operate under extreme conditions imposed by the incident laser radiation inside a laser cavity. Let’s keep in mind that the intensities are orders of magnitude higher inside the laser cavity compared with the output that the laser generates. Therefore,  It is important to look at the properties of crystals to determine which are best suited to be host crystals in such demanding applications.

First and foremost, all host crystals should be highly transparent to keep scattering and absorption rates as low as possible. Crystals also vary in degrees of hardness which can affect how easily they are cut and polished for optimal quality. Some must also be extremely durable to withstand the thermal effects of a high-power laser. The host crystal medium strongly influences the wavelength and the bandwidth of the output laser beam. The desired laser output parameters then require a broad range of crystals for different applications.

As we discussed, the composition of a laser crystal determines its best suited application. It is because of this that laser crystals are often classified based on their composition. They are often classified  by the doping ion and then the host crystal. For example, an Ytterbium (Yb) doped Yttrium Aluminum Garnet (YAG) crystal is denoted as Yb:YAG. The main host crystals in solid state laser systems include garnets, vanadates, fluorides, sapphires, and chalcogenides.

Garnet crystals are the most commonly used in solid-state lasers. Yttrium aluminium garnets are of particular interest to many researchers. YAG crystals doped with erbium (Er) and neodyium (Nd) are the most versatile laser crystals. Lasers powered by Er:YAG crystals emit light in the infrared. These lasers emit an output that is strongly absorbed by water, rendering them extremely convenient for dermatological applications.  Nd:YAG produce light also typically within the infrared range. The laser, however, has multiple other transitions and can therefore produce different wavelengths. Nd:YAG lasers operate in both continuous and pulsed modes. These lasers are used in an extremely broad range of applications ranging from medical to automotive.

Vanadate crystals are naturally birefringent, so they lose very little power to thermal effects. These crystals typically work best in diode-pumped lasers that emit high-power beams of blue and green light. The properties of YV04 crystals allow the lasers a large gain bandwidth and low thermal conductivity. Nd:YVO4 are thereby most useful in applications of laser etching and high-precision engraving. Solid-state pulsed lasers like the Nd:YV04 are especially useful in marking metal. 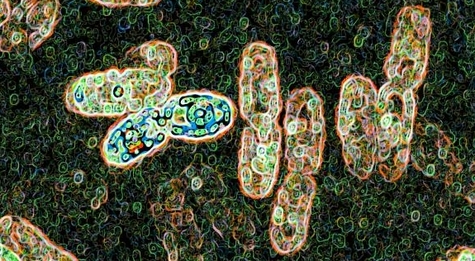 Fluoride crystals are especially useful in solid state lasers because of their unique optical properties.  LiYF4 crystals, for example, have high transparency and high durability throughout the electron emission process within the laser cavity.  LiYF4 have a broad bandwidth and are therefore able to emit short light pulses. This property makes these crystals extremely useful in mode-locking, particularly at longer wavelengths.

Sapphire crystals are most useful in applications of laser tuning because they produce a beam with a particularly broad bandwidth. The most common sapphire laser crystal is the Ti:Sapphire.  These crystals often produce an emitted beam of mode-locked ultra-short pulses. Emitted beams can range in wavelength from anywhere between 650 to 1100 nanometers. This large span makes them highly desirable in lab settings and experimental research.

Chalcogenide crystals attain particularly broad absorption and emission bands. They also produce minimal loss from excited-state absorptions. The crystals are however highly respondent to temperature changes and therefore limited in available energy storage. Despite this, chalcogenides prove valuable in emitting many different types of beams including continuous wave, gain-switched, Q-switched, and mode-locked.

Hope this post gave you a little introduction on the inner workings of solid state lasers and the unique crystals they use. Do you use solid state lasers? Do you ever buy laser crystals (Nd:YAG, Nd:Ce:YAG, Er:YAG, Nd:YVO4, YLF, etc.) for your applications? If so, please visit FindLight’s category on lasers crystals to find products from the world’s leading suppliers conveniently displayed on one centralized web-page.

To have a full spectrum flash, the medium should have an abundant set of excited energy states evenly distributed in the energy space and with relatively long lifetime. The difficulty will be in designing a laser cavity that could sustain all the excited modes.