Biosensors are devices that become increasingly crucial in the medical field. They find applications in medical diagnostics, research, as well as in farming and food processing. They typically are built of a biological material, which interacts with an analyte. An analyte is the substance that the sensor measures. A sensor records the way the analyte interacts with a specific biological element. Some examples of biological materials measured are antibodies, enzymes, and nucleic acids. Biosensors can be classified according to their method of transduction such as optical, mass, or thermal. Two  important components of biosensors are the biological material which interacts with the analyte, and the transducer which retrieves the signal from that interaction. In this blog post, we will focus on optical sensors and their ability to diagnose medical pathologies.

Dr. Leland Clark is one of the pioneers of biosensor technologies. He developed one of the first devices that measured glucose levels in blood, which saved the lives of many diabetic patients. This device is an example of an electrochemical biosensor, since it measures an electrical response. A glucose monitoring device is a common example of a biosensor, and has evolved since Dr. Clark. This biosensor uses a specific enzyme called glucose oxidase. This enzyme is a catalyst for the oxidation of glucose, whereas a sensor can measure this electrical response. The diagram below illustrates this process. While this specific device was not an optical biosensor, it was the beginning of biosensors and paved the way for complex optical sensors. 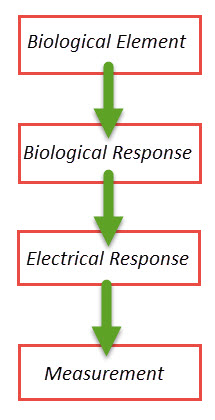 The steps on how a biosensor works. Courtesy of Electronics Hub

Optical biosensors are one of the most common types of biosensors. They are valuable since they have a high specificity, small footprint, and low cost of production. High specificity means that the amount of false positives are low. Optical sensors are currently one of the sensors that are being researched to increase COVID-19 rapid testing. The high specificity is crucial for an accurate COVID-19 test. Another positive is that the amount of analyte (biological material) that the device requires can be low while still recording an accurate response. This is helpful in mass testing applications or when the analyte is present in low concentrations.

Optical based biosensors, similar to other biosensors, utilize biological material such as enzymes, antibodies, and proteins. The transducer is an optical one, such as SPR (surface plasmon resonance), interferometers, and refractometers. Optical sensors specifically use the detection of light properties such as absorbance and fluorescence. The sensor transmits electromagnetic waves, where an area senses the light-matter interactions, and then a device measures the change in interactions. 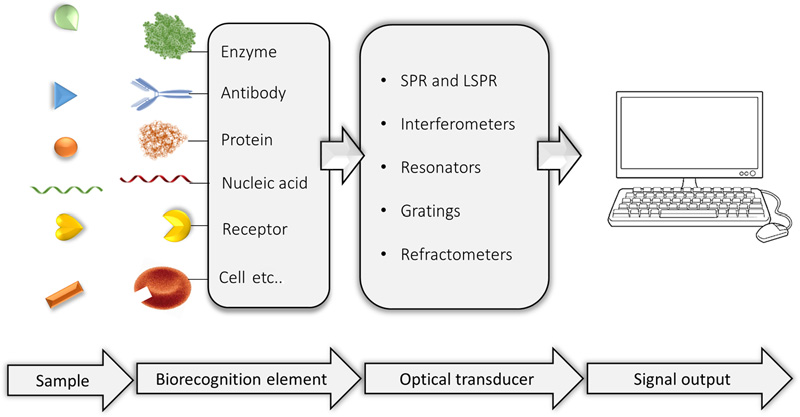 A diagram of how an optical sensors work. Courtesy of Jaroslav Katrlik

SPR sensors have been researched and developed to detect cancer cells, as discussed in “Recent Progress in Optical Sensors for Biomedical Diagnostics”. These sensors can pick up the presence of cancer biomarkers, such as cytokeratins and nucleic acids. Cytokeratins are proteins that assist in cell structure. Further research into SPR sensors for radiation and pathogen detection is also ongoing.

Bioluminescence is one example of the way optical based sensors can work. Bioluminescent optical fiber biosensors can detect bacteria. In the paper “Optical Biosensors”, E. Coli cells were genetically modified to emit a light signal in the presence of toxic agents. These cells are then immobilized on optical fibers. The signals can be detected, and therefore these bioluminescent optical sensors can detect when bacteria is present. Bioluminescence is also produced in nature, produced when a specific molecule is oxidized by an enzyme.

In a recent paper, titled “A novel optical biosensor for the early diagnosis of sepsis and severe Covid-19: the PROUD study”, scientists discuss the utilization of biosensors in diagnosing sepsis and COVID-19. Sepsis – a serious and potentially lethal condition – is often caused by COVID-19. Left untreated it can become fatal for frail patients. Therefore, its earl diagnosis is vital and can often be life saving. Unfortunately, it is not very easy to detect sepsis in the early stages. This is where optical biosensors can come to rescue. In the published study, the biosensors effectively measure and monitor information related to heart rate, as well as kidney and other vital bodily functions.

Another example of optical biosensors utilized in COVID-19 testing is being researched at the Swiss Federal Laboratories for Materials Science and Technology (EMPA). COVID-19 is an RNA virus, so if a sample contains this RNA strand, then the sample is considered positive. The transducer in this sensor is LSPR (localized surface plasmon resonance). This LSPR detector can recognize the COVID-19 RNA strand, and will emit light at a specific wavelength, which a sensor can pick up and determine if a sample is COVID-19 positive. Although promising, research on this sensor is still under development.

Optical biosensors are becoming an attractive version of biological sensors thank to their relatively low cost of manufacturing and the ability of non-invasive sensing. They may some day revolutionize medical diagnostics as testing may become quicker, less invasive, and more accurate. Advances in the field of materials research can open new avenues as specific sensor components can be better calibrated and record small changes in measurements.

A research team from Texas A&M University recently published an article on biosensor systems that may help the management of gout. Usually, gout diagnosis takes qualitative data to define, such as the location of pain. This can make it difficult to diagnose gout and to determine the severity. Traditionally, to be certain of gout, fluid is removed from the joints and taken to a laboratory. This is an expensive and invasive procedure that has a relatively lengthy time from procedure to diagnosis. Instead of removing fluid, this new optical biosensor could measure urate levels in the blood. This could not only diagnose gout quicker, but also allow the patient to continually monitor their urate levels, and therefore, see if they were getting better.