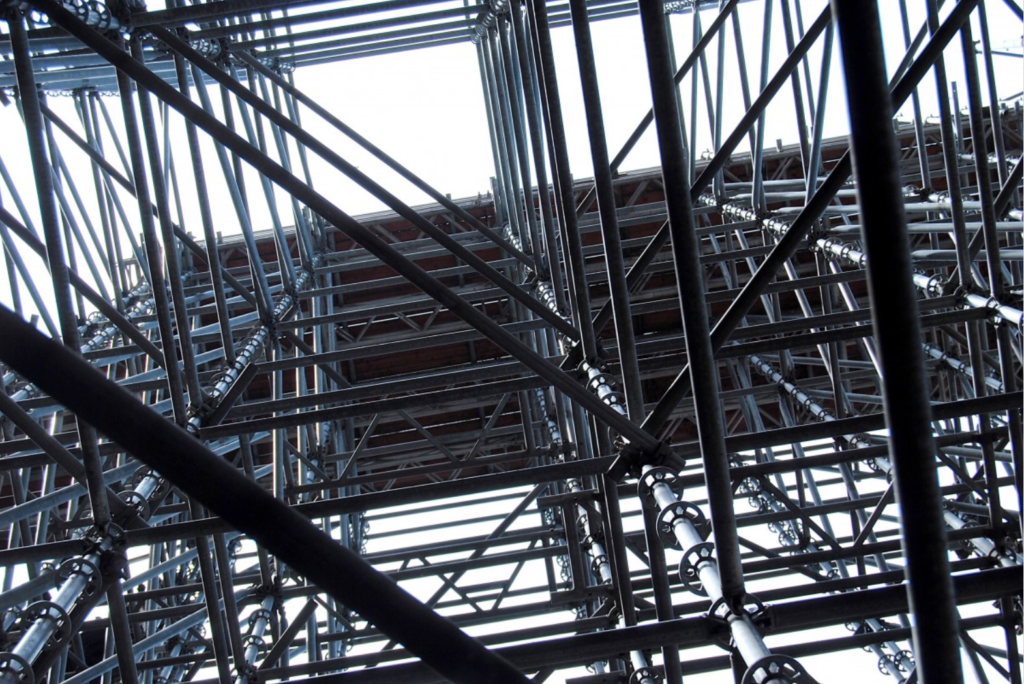 Similar to how metal scaffolding assists the construction of buildings, polymer scaffolds can be used to assist the growth of culturing cells. A team from the University of Applied Sciences Aschaffenburg has used a two-photon polymerization technique to build a three dimensional scaffold for the use of tissue engineering. Image Courtesy of pxhere.

In many tissue engineering experiments, a form of support is required to promote cell growth. Three dimensional scaffolds provide an artificial extracellular matrix, attachment sites for cells, support for cells to grow in all directions, and an ease at which growth factors or other soluble factors or hormones can be added.  Typically, a porous hydrogel scaffold is used. With the rising popularity of laser printing, lasers can now be used to write scaffolds out of hybrid polymers. At the SPIE Nanophotonics Australasia conference earlier this year, a team from the University of Applied Sciences Aschaffenburg in Germany presented their work on building scaffolds using two-photon polymerization.

What is Two-Photon Polymerization

Two-photon polymerization is a micro fabrication technique utilizing two-photon absorption. The process uses a femtosecond laser beam, which is focused onto a volume of photosensitive resins. In this way, only the material around the focus point of the laser beam is modified. This allows for the three-dimensional writing of structures with resolutions up to 100nm. For three-dimensional porous structures, such as the scaffolds, the dimensions, pore size, and overall structure can be specified with great accuracy.

The research team utilized a 515 nm femtosecond laser. This beam was then guided through an optical system, the experimental set-up of which is displayed below. The objective which focuses the beam can easily move on the z-axis. Additionally, the plate on which the object rests is movable along x and y-axes.  This setup achieves pore sizes within the scaffold in the range of 5 μm to 90 μm. 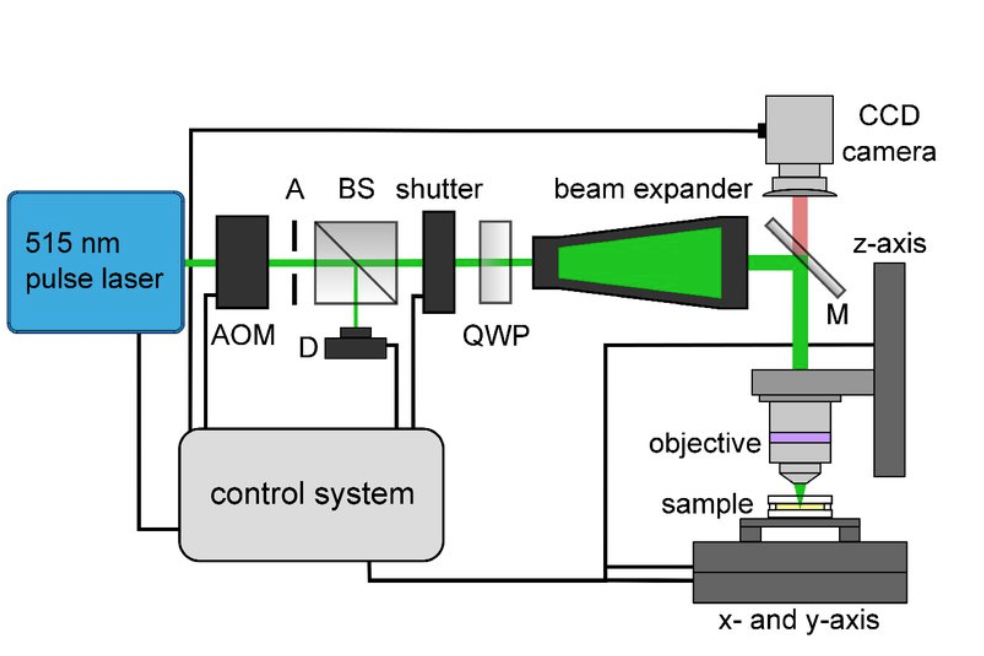 This figure displays the experimental set up for the polymerization process. Image courtesy of SPIE Nanophotonics Australasia.

Researchers carefully selected the material, OrmoCorp®, for this experiment. OrmoCorp® is a nonorganic-organic hybrid polymer. It exhibited ideal non-toxicity and cell adhesion levels, and could be easily modified. Following polymerization, the scaffolds were irradiated with a 365 nm UV light source, rinsed, treated, and sterilized in preparation for the addition of cells. The experiment used normal human dermal fibroblasts to test cellular success and adhesion to the scaffolds. 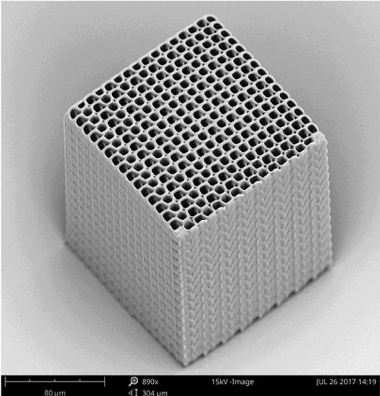 A finished scaffold with a pore size of 10μm. Image courtesy of SPIE Nanophotonics Australasia.

Results of the Experiment

After five days of cultivation, the scaffolds and cells placed on them were imaged with a scanning electron microscope. These images proved that, regardless of pore size, all the scaffolds exhibited cell growth and proliferation. Researchers noted that the material used remained non-toxic and aided cell adhesion. Additionally, cell ingrowth within the scaffold pores and vertical cell growth was observed. Finally, researchers concluded scaffolds written through the use of two-photon polymerization with OrmoCorp® as the material were successful in achieving cell growth. 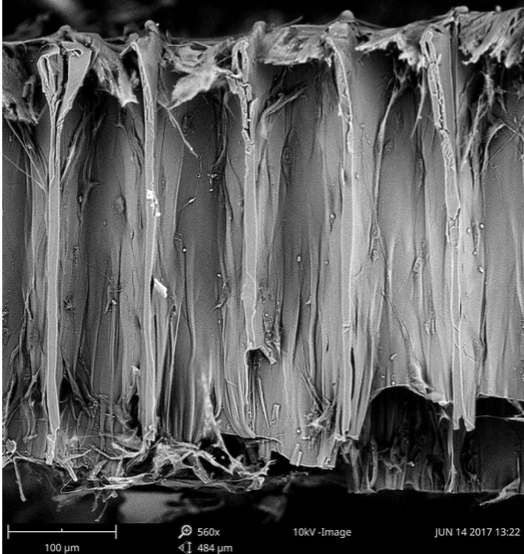 An SEM image of the cross section of a scaffold following 5 days of cell culturing. Visible are cells growing within the pores, a sign of cell ingrowth. Image courtesy of SPIE Nanophotonics Australasia.

The use of scaffolds is of great importance to the tissue engineering field. Typically, in the case of damaged tissue, patients require a transplant, autograft, or allograft. These reparative techniques require the use of cells or body parts harvested from the patient himself or from a donor. However, some of these techniques come with great risk to the patient as they could be accompanied by long, painful surgeries or rejection of the tissue by the patient. Tissue engineers seek to find regenerative methods to repair tissue damage which would replace these traditional transplantation techniques. Often times, this requires growing cells in the lab to then transplant into the patient. Three-dimensional porous scaffolds are necessary to support the growth of cells and to provide structure.

The ability to write three-dimensional scaffolds of any chosen material through two-photon polymerization is an important step towards better scaffolds. Scaffolds built in this way have great resolution, and the engineer can accurately specify dimension and pore size necessary for each individual project. Therefore, scaffolds built using the technique outlined in the paper have great promise for clinical and laboratory applications as regenerative medicine increases in popularity in comparison to traditional medicine. The results that researchers observed prove that the material used allowed for cell proliferation as it had sufficient non-toxic, adhesive, and mechanical properties. In the future, a greater range of scaffold shapes and cell types could be tested to determine success of this technique for a wider range of variables.

To read more about this technique to build scaffolds, you can read the paper here.