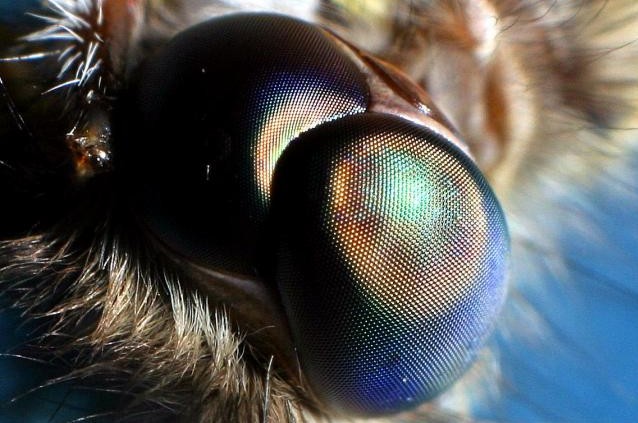 Moth eyes have long-inspired antireflective surfaces. These surfaces are efficient because less reflection leads to less light loss. It is the nanostructures found in moth eyes that have inspired nanohole fabrication. Photo courtesy of Physics World.

A team of researchers from the Korean Advanced Institute of Science and Technology has developed improved techniques for large-scale nanohole fabrication. Importantly, these nanoholes are used in anti-reflective surfaces to improve light transmission. The new technique involves solid-state dewetting, ion etching, and wet etching. As we will see, this improved fabrication can aid the production of commercially used glass lenses or lighting. The research team detailed these new techniques in a paper published last month.

What are anti-reflective surfaces?

As one might expect, surfaces with anti-reflective properties have reduced reflection, so that more light can pass through. Interestingly, anti-reflective (AR) surfaces occur commonly in nature. For instance, several organisms, including moths, have evolved to produce anti-reflective functionality in their eyes. As their eyes allow for the passage of more light, their vision is improved. These natural surfaces have inspired the fabrication of commercially-used products. Most commonly, an anti-reflective coating on eye-glasses reduces glare and improves vision.

How did the research team improve nanohole fabrication?

The purpose of the experiment of the research team was to create an optical lens with glass nanoholes, so that the resulting lens would have strong anti-reflective properties. Starting with a glass substrate, researchers added nano-pores through the use of three distinct steps: dewetting, ion etching, and water etching. The figure below shows a visual demonstration of these three steps. 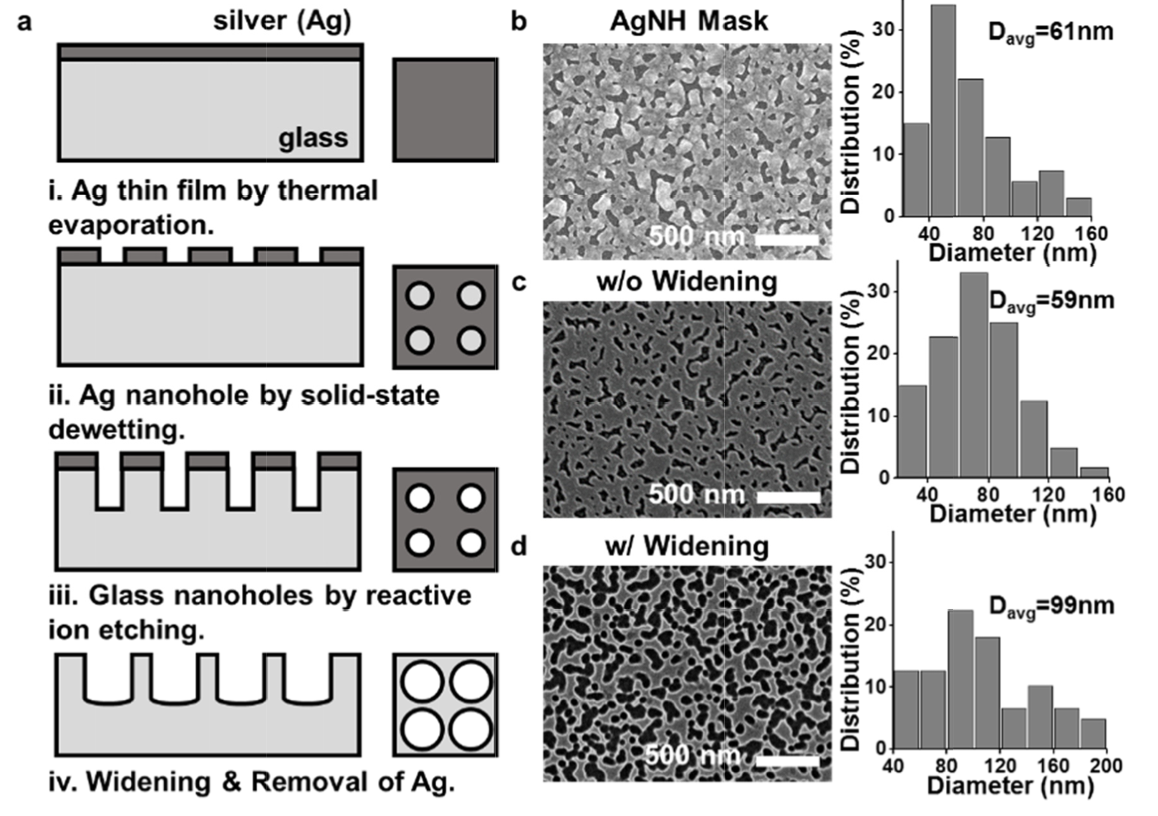 The visual above shows how nano-hole fabrication is achieved. The graphics on the far left show the solid after each step from a side and top view. The graphics in the middle show SEM images of the surface. Finally, the graphs on the right display the size distribution of the holes in the resulting surfaces. Image Courtesy of Optics Express.

First, a wafer-thin silver layer is fabricated onto the glass solid. Next, solid-state dewetting, which leads to the development of small holes in the silver layer, occurs at low temperatures. These silver nanoholes act as templates for the glass nanoholes. Subsequently, the glass nanoholes are made through a series of ion etching and water etching. The reactive-ion etching, known as RIE, can create holes in the glass of a very precise height. Finally, the glass nanoholes widen during the process of wet etching. Once the wet etching was complete, researchers removed the silver template layer and the result was a solid glass substrate with strong anti-reflective properties.

How successful were the resulting anti-reflective surfaces?

Following fabrication, they measured light transmittance of the solids with varying nanohole depths using a light spectrometer. In doing so, the thickness of these nanoholes varied from 70nm to 150nm. Let’s recall from the above discussion that thickness of those layers were controlled by the length of the RIE process. As expected, the addition of nanoholes to the glass surfaces increased optical transmittance of the visible light range up to 4% compared to glass surfaces lacking nanoholes.

Next, to explore the practicality of their invention, the research team moved on to creating a curved lens. The lens, consisting of tantalum flint, had an additional SiO2 layer on top to create the anti-reflective surface. Surprisingly, measuring the light transmittance proved a 7% increased optical transmittance, while images made with the modified lens were much clearer than those made from a standard lens. 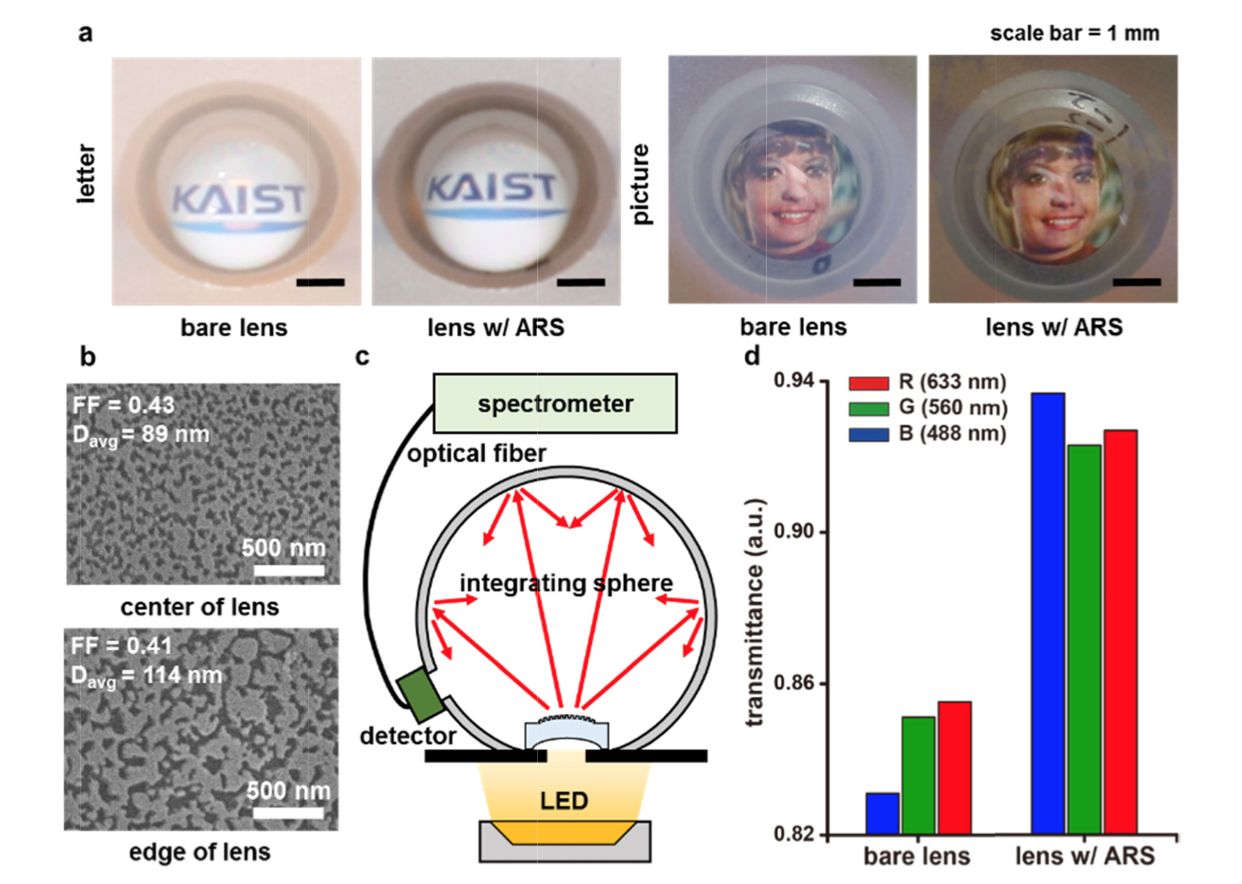 Shown above are images made using an unmodified lens and a lens with an anti-reflective surface obtained through nanohole fabrication. The modified lenses are much clearer. Additionally, the graphic displays how transmittance was measured and proves that transmittance increased for the modified lens. Image Courtesy of Optics Express.

In conclusion, the team was successful in creating modified lenses and surfaces with materially improved anti-reflective properties. They were able to achieve these modifications by employing a novel nanohole fabrication method. Moreover, they showed that this method can be applied to large-scale production of modified lenses. This is a valuable achievement in the field of optics and imaging and offers a path in improving the efficiency of fabrication. Inevitably, these advances in production will lead to an increased use and decreased commercial price of products with anti-reflective properties.

To read more about these novel fabrication methods, the paper can be viewed here.