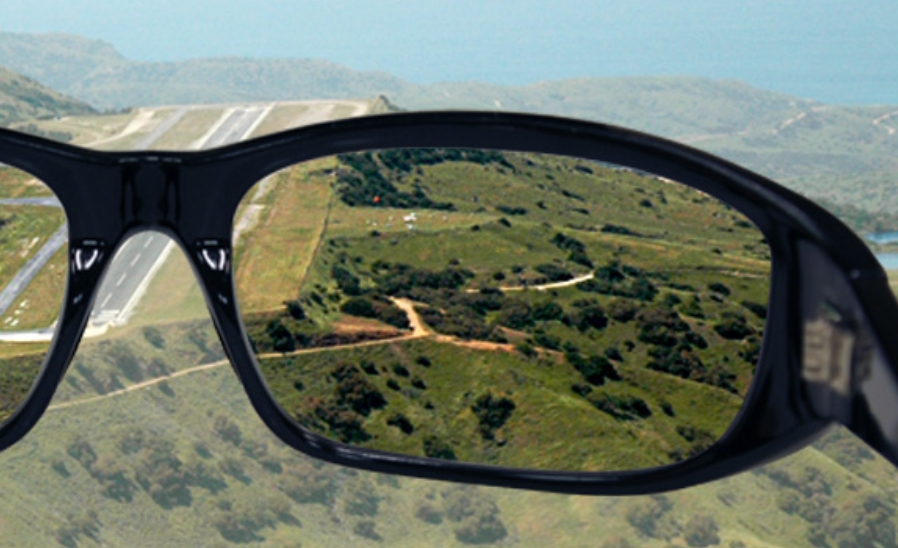 AR coating techniques allow for widths of only a few nanometers. Courtesy of Louisiana Bucket Brigade.

Having discussed the history and physics of AR coats, our final article discusses the standard AR coating techniques via application of thin films. The basic principles of AR coating application remain the same since the last 50 years. However, modern technology can deposit single layers of atoms / molecules at a time. Yet considering the overall complexity of such a process, the average cost of the process is relatively cheap. The benefit of AR coating on regular eyeglasses costs as less as an additional $20, while current smartphone cameras and DSLRs without AR coated lenses are unheard of.

Lenses provide higher transmission of light with age. Specifically, the refractive index of their upper layers reduce by reacting with the environment. In 1904, an optician Dennis Taylor, successfully achieved this result through artificial means. He deliberately corroded the top layer of a glass by pouring acid on it. Although this method has a patent, it is not very useful, considering it greatly reduces the lenses’ durability.

By the 1940s, Olexander Smakula had perfected the technique of vacuum deposition that is still used today to create single and multiple AR coatings. In fact, the term vacuum deposition describes several different processes of depositing layer by layer. The vacuum environment increases the mean free path of molecules – the average distance any molecule travels before it collides with another. Hence the molecules can reach the lens without reacting with other molecules before, and form a non-contaminated layer.

A simple visualization of a vacuum deposition chamber. Courtesy of web.tuat.ac.jp

The Electron Beam Physical Vapor Deposition (EBPVD) technique is the standard AR coating technique. To illustrate its functionalities, the figure below shows a set-up of the EBPVD chamber. 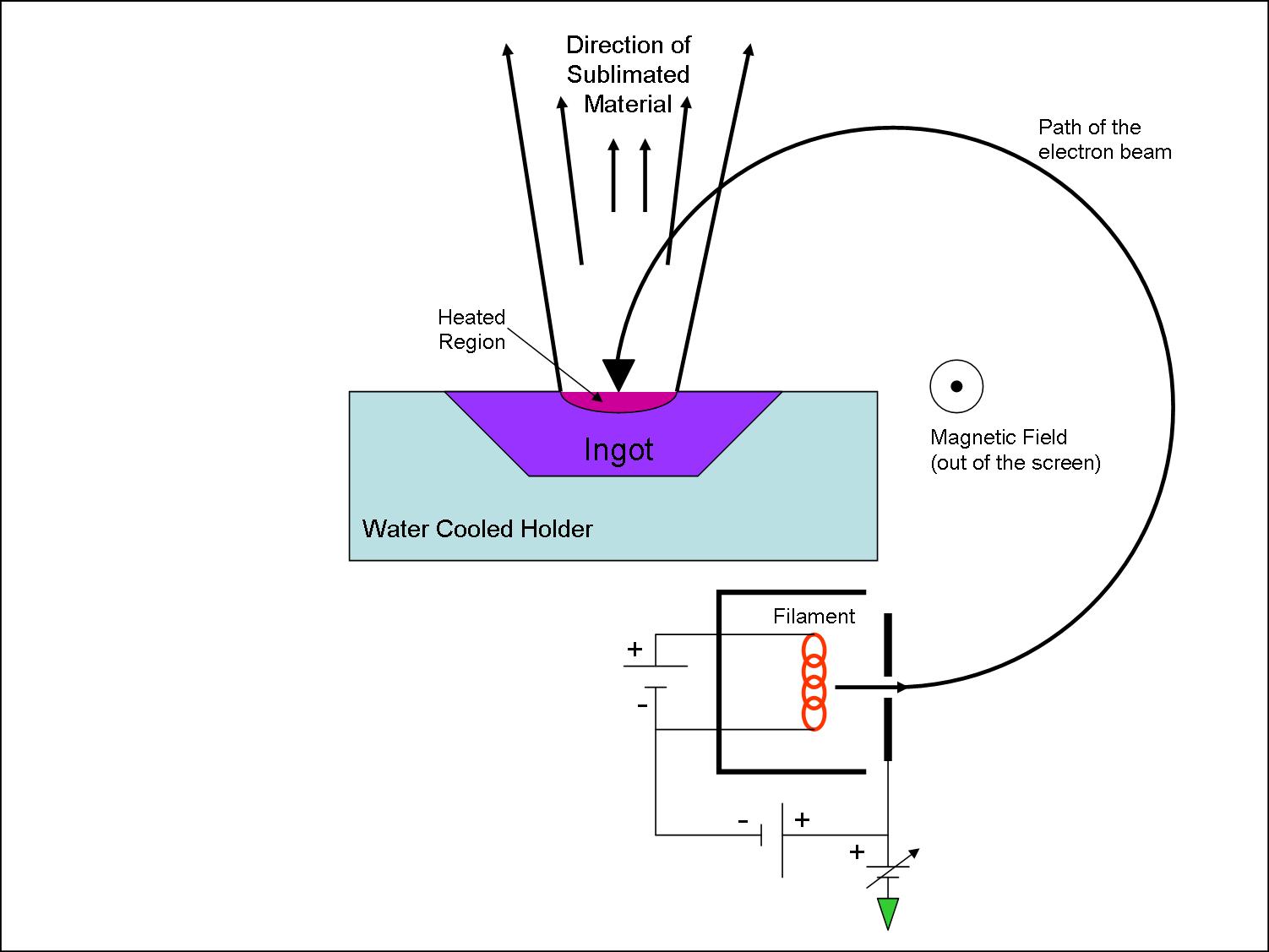 The positively charged anode consists of the AR coating material, in a solid state (Heated Region in the figure). A heated tungsten filament emits electrons, which accelerate in the magnetic field and towards the anode. This high energy bombardment releases the target molecules. Traveling outward, they form a thin uniform layer on all the objects in its path, including the chamber wall. The vacuum pump tries to remove any stray atoms emitted from the heated tungsten filament. The pressure of the chamber is of the order 0.001 PA, or 10^(-5) millibar.
The lenses are kept on top of the mount, over a 100 at a time may be placed, depending on their diameter. The mount rotates to ensure uniform deposition. Only one side of the lens surface is coated at a time. 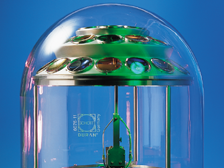 The lens holder: top half of a vacuum deposition chamber. Courtesy of Zeiss.

The target material found at the anode comes in the form of tablets or granules. The ‘physical’ term in EBPVD, as opposed to ‘chemical’ is due to this initial solid state of the AR coating material. Molecules, upon colliding the electrons, reach up to a velocity of 100 m/s. The AR coating rate ranges from 0.1 nm per minute to 100 nm per minute.

Another closely related AR coating technique of applying thin coats is to use ions of inert gases to bombard the AR target instead of electrons. Using inert gas molecules ensures they don’t react with the vapor. However they do collide, reducing their mean free path. This, in turn, slows down the coating process when compared to EBPVD.
Nevertheless, due to the higher energy of the inert gas molecules when compared to electrons, Ion Beam Deposition works well even when the melting point of the AR coating is high and EBPVD cannot turn it into vapor.
On the other side of the scale, a high energy pulsed laser can also used to create vapor deposition. Photons incident on the coating source are even lighter than electrons, therefore the laser intensity needs to be even higher. That said, laser deposition is better used for non-AR purposes, in chambers often filled with oxygen. This creates an oxidized vapor that deposits on the surface in a thin film. Oxidized graphene films have diverse uses like micro-transistors, solar cells, and biosensors. 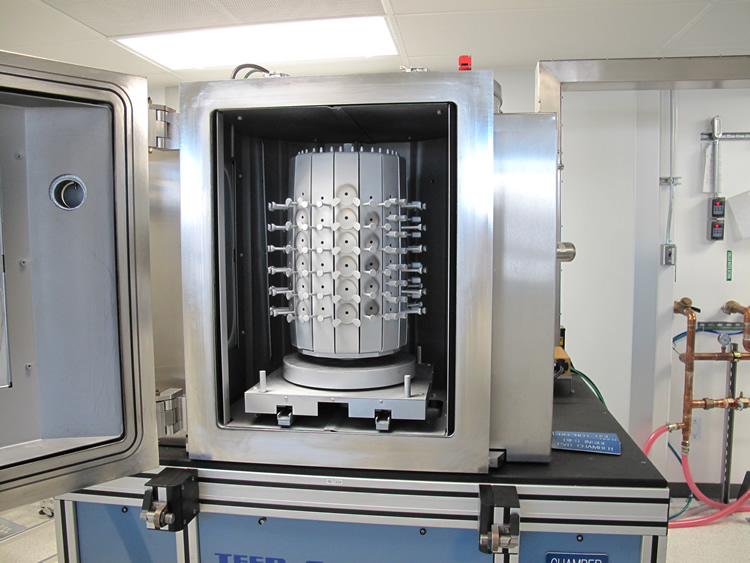 An Inside view of a physical vacuum deposition chamber. Courtesy of Coin News.

Lenses can have multiple AR coats to achieve anti-reflection across all wavelengths. EBVPD and all other vacuum deposition techniques can create layers of a single molecule, giving them greater control and precision when creating multi-layer AR coating.

Two other used methods are dip coating and spin coating. Unlike physical vacuum deposition, AR coating is initially in liquid form.
A solvent with high evaporation capabilities dissolves the coating material. When a thin film of such a solution forms on the object, the solvent evaporates, leaving only the AR coating.

The entire dip coating process. Courtesy of The Sol-Gel Gateway.

Dip coating, one of the most simplest and beautiful processes to watch, consists of dipping an object gradually in the solution. The coating material uniformly sticks to its surface as the object is submerged and brought out.
In spin coating, the AR dissolved solution is placed on the surface of a smoooth surface and rotated quickly. The centrifugal forces spreads the liquid across the surface as the solvent dissolves, leaving a uniform AR coating. And the faster the rotation, the thinner the film.

Both these AR coating techniques are quicker than the vapor deposition method and can coat larger surfaces. But their inability to create as thin a layer makes them more useful for non-AR related thin films.

Here is a summary table showing the different areas each technique excels in. Hybrid technologies, combining the EBVPD with chemical deposition for instance, often outperform their individual constituents in key areas.

Comparisons between the different methods. No single method is suitable for all purpose.

In general, all coating techniques work best when the surface is smooth and the flat. Although not covered in this article, it should be mentioned that the coated materials undergo an extensive cleaning treatment to remove any impurities that may have crept in during the layering process and affect the transparency.
Tags: anti-reflection coating, AR coatings, Thin Film Deposition
Related Articles
Comments

Thanks for good information

Your online journal gave us profitable data to work with. Each and every tips of your post are marvelous. Much appreciated for sharing. Continue blogging.