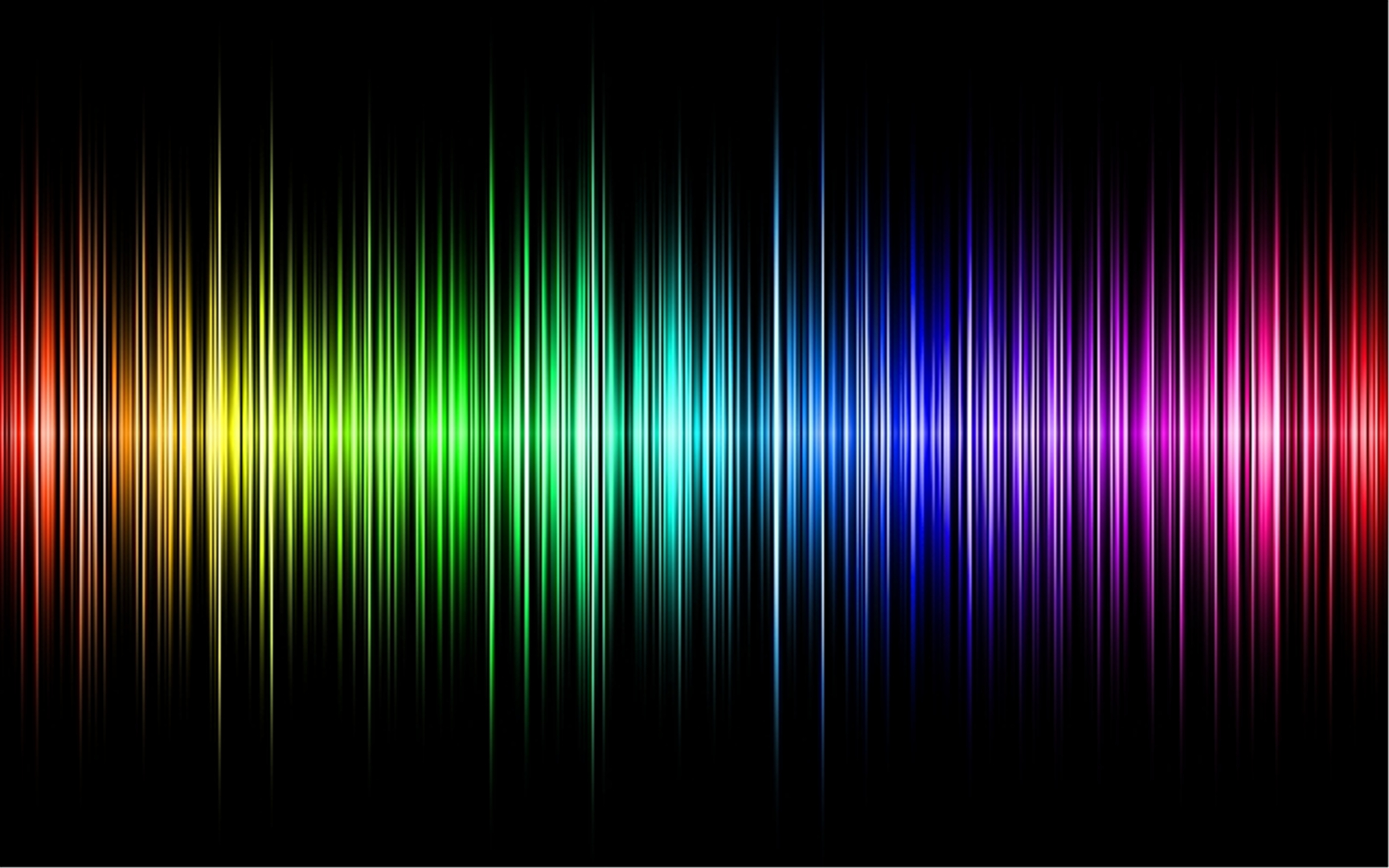 Diffraction gratings can separate white light by its wavelength components to create a spectrum of color. Courtesy of Pinterest.

Diffraction gratings are optical components that diffract and separate light into several beams at different angles by wavelength. Their working principle is hinged upon the fundamental properties of light, and specifically on its ability to diffract when stumbled upon narrow slits or grooves. The ability of light to diffract was first observed and studied by Francesco Maria Grimaldi in 17th century. Later the infamous double-slit experiment stunned the scientific world by demonstrating that light could have both particle and wave-like properties.

The ability to dissect light into its constituent components opened up new avenues for understanding the composition of materials by studying their characteristic absorption/emission spectra. Soon, an entire field of science – called Spectrography – was born. Diffraction gratings are the tool of choice over the glass prisms in light-splitting experiments because they do not absorb UV or infrared radiation. This allows for applications in a much broader wavelength spectrum.

A Brief History of Diffraction Gratings

The field of spectroscopy emerged from the study of light dispersion by a prism. In 1666, Sir Isaac Newton proved that white light is comprised of multiple wavelengths correlating to the visible light spectrum. He showed that when focused sunlight is incident upon a glass prism, the light emerges different colors at different angles. Scientists acknowledged the significance of the dispersion and the study of spectroscopy flourished. Physicist Joseph von Fraunhofer then developed the diffraction grating in 1821. This first model consisted of a wire mesh acting as multiple thin slits. Fraunhofer later found that spacing the wires closer together further dispersed the spectrum. His discovery and method allowed for simpler analysis and transformed spectroscopy into a quantitative science. 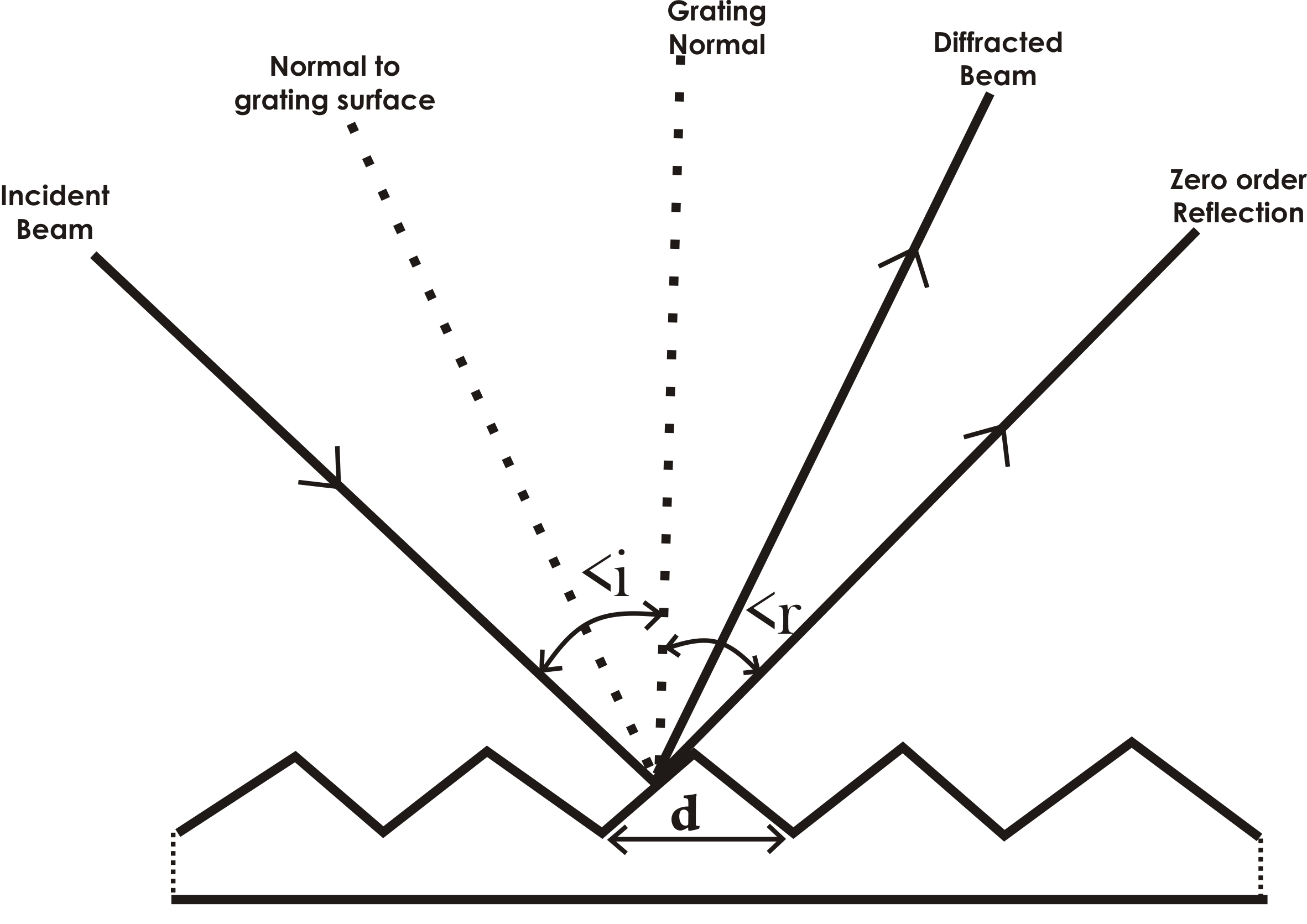 The above shows a simplified diagram of incident light hitting a grating and the resultant diffraction. Courtesy of Lab-Training.

Contemporary diffraction gratings contain a periodic structure of ridges which cause variance in the output waves’ amplitude and phase. These devices exploit diffraction – a phenomenon in which light incident to a surface disperses at certain angles. The diffraction angle is dependent on the wavelength of the incident photons. Light containing multiple wavelengths (such as white light) will then diffract at separate angles. The two main grating types are reflection and transmission. Reflection gratings contain a reflective surface where the segments between the grooves of the grating act as parallel mirrors causing the light to interfere and form a diffraction pattern.  Transmission gratings are typically made up of a transparent material. Incident light transmits through the grating and disperses at different angles depending on the distance between the rulings. Reflective and transmissive gratings bend light in a similar fashion to mirrors and lenses, respectively.

Today, almost all light spectrometers use diffraction gratings. Significant advances in manufacturing methods led to great advancements in grating instrumentation. The majority of gratings are produced using techniques of either mechanical ruling or interference methods. Mechanical ruling creates a master grating by dragging a diamond across a metal substrate to produce the series of rulings.  Developers, however, are now moving toward recording interference patterns to produce holographic gratings. This method forms the required fringe pattern by exposing a photosensitive substrate to two coincident lasers. Both mechanical ruling and interference methods require the replication of the master grating.

Diffraction gratings can be used in a very broad array of optical experiments and applications. Gratings are often used in laser wavelength selection, pulse compressing, telecommunication, lasers scanners and holograms. Particularly interesting is their use in obtaining astronomical spectra and in space experiments. Spectroscopy techniques facilitate detailed studies of stars and other objects in space given that every element in space has its own unique discrete spectrum based on its consistency. Astronomical imaging typically requires reflection gratings to generate wave interference in the UV or infrared range. Diffraction gratings allow researchers to observe and study such important areas as star’s composition, motion, and temperature.

If you liked this article please follow us on Facebook and bookmark FindLight to return for periodic updates on interesting topics.