Lasers are one of the most versatile scientific advancements in the last century.  Since the first laser patent in 1960, the laser industry has expanded from research to medicine, and now into the skin treatment industry. The first step towards laser skin treatment occurred in 1964 with the development of the carbon dioxide laser.  Researchers found that the light beam produced by these lasers are well absorbed by water.  Because soft tissue mostly consists of water, they theorized that the lasers could be used to cut through tissue.  The next few decades saw the development of carbon dioxide lasers able to resurface the skin while causing minimal damage to the surrounding area.

Today, laser skin treatment procedures are minimally-invasive, effective, and require a much shorter recovery time than is expected of surgical procedures. These treatments now cover a vast variety of aesthetic and medical applications, leading to industrial success.  The cosmetic laser market is estimated at $700 million with an estimated growth of 12% through 2021.  Lasers are also gaining popularity in treating certain types of skin cancer, and the industry hosts many promising clinical trials for future medical applications.

How Does It Work?

Sunlight or fluorescent light can have many different wavelengths traveling in all directions. Laser light, however, has a single wavelength focused along the path of a narrow beam. This allows for extremely precise control over the system, and makes lasers a valuable option in skin treatment.Dermatologic surgeons typically use gas lasers in which an electric current is sent through a gas to produce a strong light source, and the power output of the laser is dependent on the type of gas being used as a medium. Laser skin treatments most often utilize either a carbon dioxide or erbium laser. CO2 lasers use short, high-energy pulses of light to remove skin tissue in a scanning pattern. This is to say that certain columns of skin are removed while leaving the surrounding skin intact in order to stimulate healing. Carbon dioxide lasers are best used in treating deeper skin concerns, as their high power allows for deeper penetration of the skin.  Erbium lasers use a similar technique, but they are less powerful than the CO2 laser. Erbium resurfacing is then best suited for surface-level skin conditions, typically superficial wrinkles, scars, or mild sun damage. 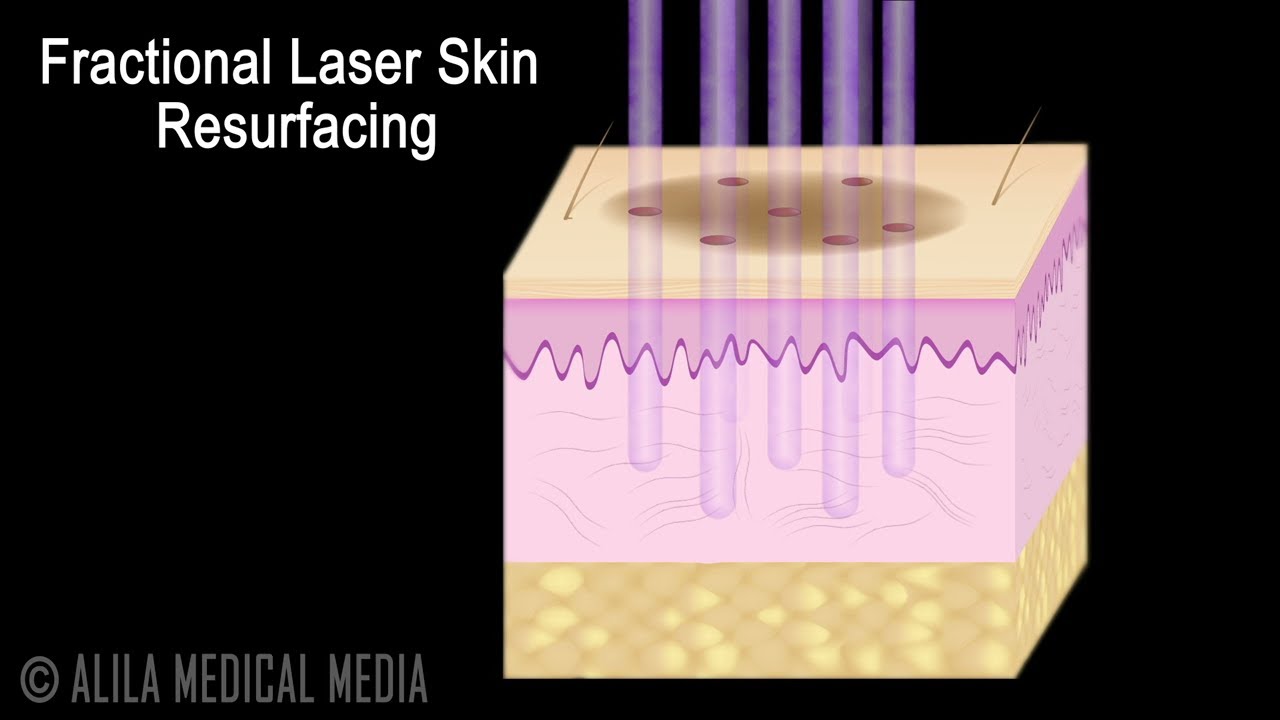 An animation of the laser beam penetrating the skin with a gradient of light. Courtesy of Alila Medical Media

Laser resurfacing techniques are most commonly used in smoothing wrinkles and scars.  For more severe blemishes, dermatologic surgeons frequently use a technique called fractional CO2 laser resurfacing.  In this procedure, small and deep columns of light are sent through microscopic holes of a scanner.  This creates the gradient of the treatment zone on the skin.  The spaces in between the light columns are unaffected so that the skin is able to heal more quickly.  During this process, scarred or damaged skin cells are removed, stimulating brand new skin cells to smooth out scars and wrinkles.  Erbium lasers can be used to remedy superficial wrinkles or scars by emitting a light of much lower frequency to tighten and smooth the skin as it heals. 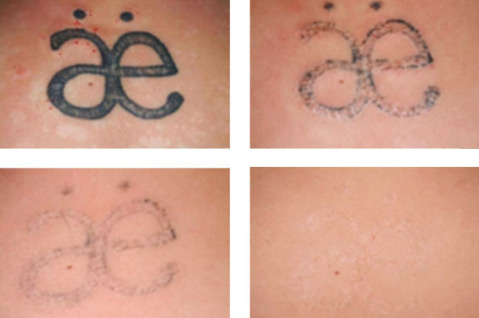 The process of a tattoo being removed through four sessions. Courtesy of the Cosmetic Skin & Laser Center

Laser tattoo removal uses high-power laser light to break down the ink particles in a tattoo and then allows the body’s immune system to continue dissolving the pigmented particles. This step in the process mimics the natural fading that occurs over time due to sun exposure.  Modern tattoo removal typically utilize Q-switched lasers– lasers that produce short, highly energetic pulses.  These light pulses are tuned to a wavelength that will cause high absorption rates in the tattoo pigment.  For example, red light is highly absorbed by green tattoo pigments.  The high energy of the light causes the surface temperature of the ink particles to experience an extreme increase in temperature, causing a shock wave to propagate throughout the dermis.  This leads to the fragmentation of the ink.  Q-switched lasers are desirable in this process because they operate on extremely short time durations.  Longer periods would cause burns or scars in the surrounding tissue. Advancements in laser tattoo removal methods have contributed to a 440% surge in the tattoo removal industry’s revenue over the past decade.

As stated earlier, lasers are ideal for certain procedures because they are able to be controlled with extreme precision. This precision can be useful when treating small areas of the skin, as with certain skin pre-cancers and cancers. High-intensity laser light is able to shrink or destroy precancerous growths on the skin by removing the affected tissue and then allowing the skin to heal.

Photodynamic therapy can be used to kill certain type of cancer cells on or just below the skin.  This technique uses laser light with a photosynthesizing agent. In the case of skin cancer, the agent is put on the skin and absorbed by the cancerous cells. A laser light is then applied to the effected area, causing the drug to react with oxygen and form a chemical that kills the cells.  PDT is preferred when possible because it is less evasive than surgery and  there are no long-term effects when treated properly.  A major limiting factor with PDT, however, is that it can only be used in areas where light is able to reach.  Photodynamic therapy is not currently widely used in treating cancer, though it is gaining more recognition as a viable option for many patients. It is still being studied in many clinical trials, but it has shown to increase life span and improve patients’ quality of life.

Absolutely an informative article showing the tireless effort being put continuously by the researchers and scientists for utilizing laser beam power in all the possible manners to serve the humanity.

Thanks for sharing this valuable knowledge with us. This will spread cancer awareness in society. Whoever posted this article consider yourself a pro writer. Please post more article like that if you need any help this website https://www.cancerbro.com/ have latest and authentic information about cancer.

The skin is the largest organ in the human body. It protects and covers the whole body and anything that touches and causes harm to it may appear prominent like a scar. A scar may come from different factors like burns, accidents and even surgical procedures. A scar means the trauma caused to the skin is on its recovery or healing period and in many ways than not, a scar may not go away for a very long time.
https://www.dubaicosmeticsurgery.com/laser-treatments/scar-removal/

Skin is indeed the largest visible part of the human body. Moreover, it is associated with all body parts, so that complications in other parts of the body, might negatively impact the skin. This makes laser skin treatment especially important. Over the recent years lasers have proven to be practical tools for ablating skin tissues to treat blemishes, wrinkles, and seal blood vessels. It is also used for removing unwanted hairs, removing uneven skin tone and texture, eliminating smoker’s line, and more.