X-Ray Microscopy: A Bigger World In A Smaller Scale 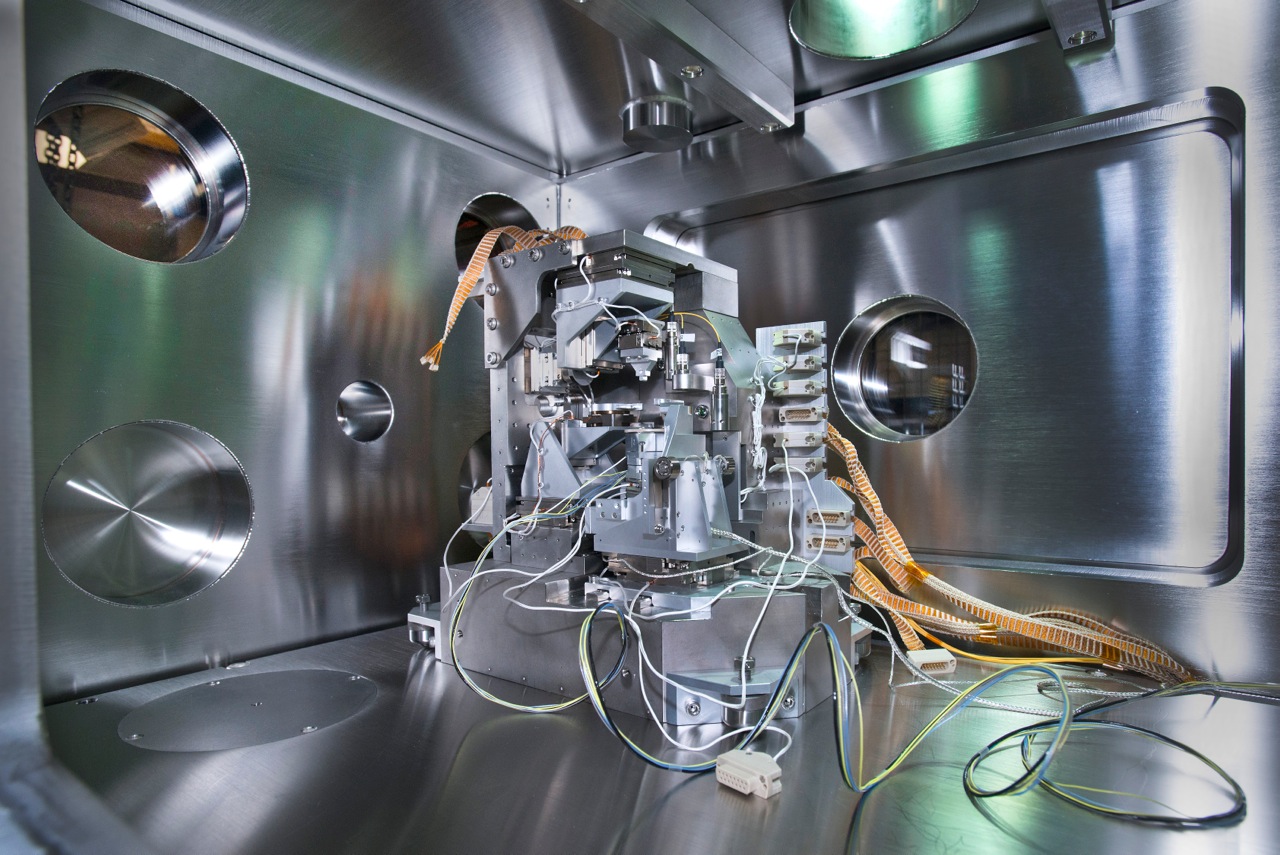 Ever since x-ray was first discovered by Sir Wilhelm Röntgen, scientists have started the enthusiastic exploration of its potential for imaging applications. Among all the sub-fields, x-ray microscopy has become a fledging toolset that presents us more surprises in the study of biological phenomena and materials properties. 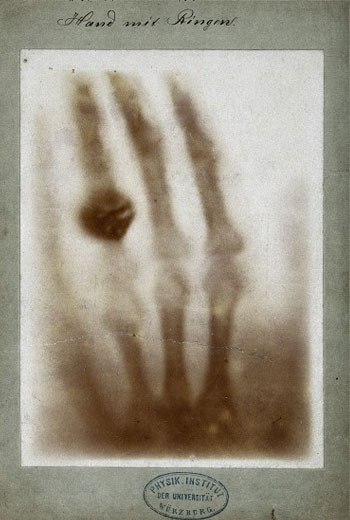 The hand with a ring: The world’s first x-ray photo taken by Rontgen. Courtesy of Google.

How Do X-Ray Microscopes Work?

Microscopes rely on certain types of media to obtain magnified images of small objects, and for x-ray microscopes, this role is filled by soft x-ray photons that have a wavelength of 1 to 10nm. Not only are these photons invisible to naked eyes but also they are uneasy to be reflected or refracted. Hence, unlike common optical microscopes which use a set of convex lenses to build enlarged images, x-ray microscopes shoot specimens with x-ray beams, and then employ films or CCDs to detect the signals passing through the specimens.

Forms of X-Ray Microscopy In the Market

The way that x-ray photons interact with matter determines the possible forms that x-ray microscopy takes. In particular, when an object is placed into a beam of soft x-rays, three major types of signals are generated, giving rise to three forms of x-ray microscopy:

When an x-ray beam goes through a partially transmitting object, the direct beam intensity will be spatially modulated by the absorbing sites, i.e. atoms. Thus, by placing a high-resolution detector right beside the exit surface of the specimen, the near-field signals can be recorded to form contact images, and subsequently magnified to intended sizes. This methodology has now been developed into contact x-ray imaging techniques.

In modern contact x-ray microscopy, the specimen is placed closely with a layer of PMMA, a kind of x-ray sensitive material. After being irradiated by x-ray beams, the photoresist is developed in a proper solvent, and hence becomes a map of relative x-ray opacity of different specimen regions. This contact print is then enlarged by scanning electron microscopy (SEM) or tunneling electron microscopy (TEM), giving rise to magnified images of the observed specimen. 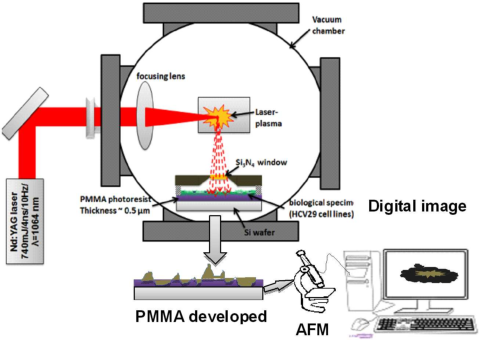 The far-field signals also come from the direct x-ray beams, but are measured at a much larger distance from the specimen. Because of this distance, there is a strong effect of intensity reduction, producing very different features from the near-field signals.

The corresponding technique utilizing these far-field intensity-reduction signals is scanning x-ray microscopy. It focuses a small incident beam of x-ray photons on the specimen and performs raster scanning. The intensity of the transmitted direct beam is recorded by a detector placed somewhere behind, and subsequently displayed raster-wise to produce magnified images of the specimen. 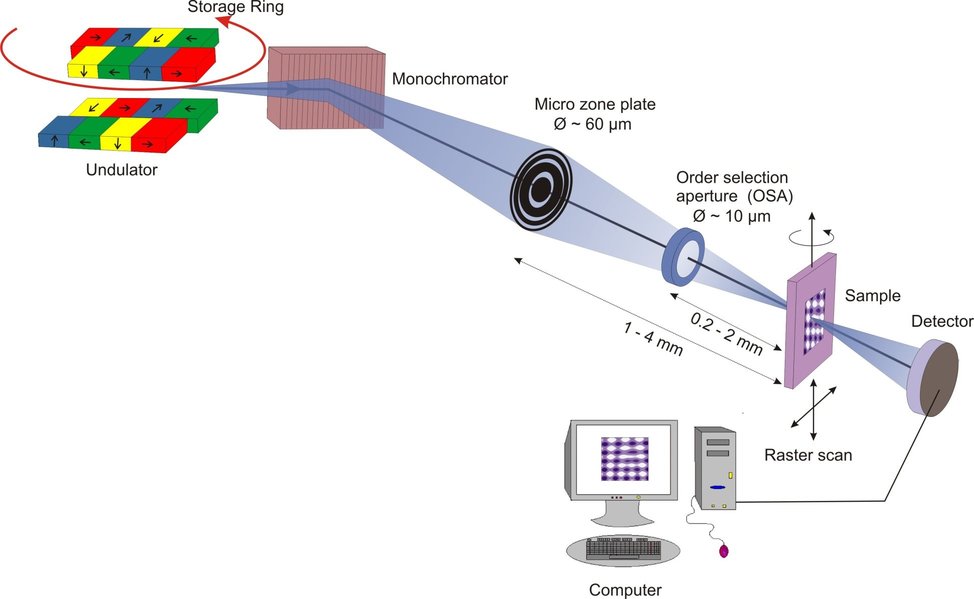 The basic setups of a scanning x-ray microscope. Courtesy to Google.

In addition to the signals from direct beam, x-ray photons passing through specimens can also be scattered out of the direct beam coherently, generating a by-product diffraction signal. Though much weaker than the direct beam field, it can grow stronger as the specimen has nonuniform atom distribution, and thus be measured at intermediate and large distances.

What Benefits Can X-Ray Microscopy Offer?

It is natural for people to ask whether x-ray microscopy has better performance than other imaging techniques, and we can see via the following comparison, that even though the switching of imaging particles seems inconsequential, its superiority compared to optical and electron microscopies are dramatic and exciting. 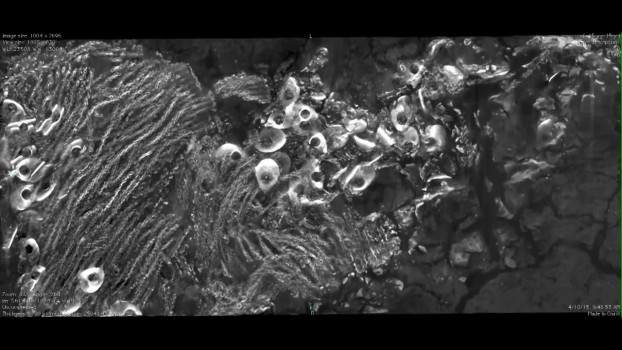 An x-ray microscopic image showing the delicate silver artifacts inside the excavated block of soil. Courtesy of Jamestown Rediscovery Foundation.

The short wavelength of soft x-ray photons can allow microscopic imaging with sub-10nm resolution, while the best obtained to date images sport less than 5nm resolution. Although this figure is about an order of magnitude lower than that of electron microscopes, it still significantly surpasses the micrometer-level limit of conventional optical microscopes.

X-ray photons are very powerful and can penetrate materials of greater thickness. Thus, while samples for electron microscopes need to be cut 0.2-0.3 micron thin, x-ray microscopes are able to directly probe specimens an order of magnitude thicker (2-3 micron) without similar procedures.

Furthermore, x-ray photons have a highly-favored contrast feature. For photons with wavelengths between 2.34nm — 4.4nm, water is almost transparent, whereas organic molecules are much more absorbing.  This contrast in absorption makes x-ray microscopy very suitable for wet samples like biological specimens.

Most importantly, biological specimens observed under electron microscopes are usually not in their natural living conditions. Their life processes have to be stalled at certain static moments via staining, dehydration and sub-micron slicing, etc. For conventional microscopes, although this “ freezing effect ” can be unnecessary sometimes, people have to trade-off the image resolution and contrast. However, x-ray microscope in this aspect is superior. Due to its stronger penetration ability and natural contrast mechanism, not only the specimen can be prepared with minimal efforts, but also their original living situations could be observed with little interference. Thus, x-ray microscopy shows greater potential to unveil the unaffected, dynamic life processes.

In addition to the capability of magnifying the details of objects, x-ray can also provide further information of observed specimens. For example, by choosing light sources with proper wavelengths, x-ray photons can cause fluorescence in most materials, and this emission has the potential to determine the elemental composition of the imaged objects. Also, when scattered by crystals, x-ray beams will exhibit diffraction patterns, with which researchers can make proper conjectures about the crystalline structures of minerals and protein molecules. This technique has now been fully developed into the x-ray crystallography.

The idea of x-ray microscopy is actually not new, but it was not until recent years that this field has harvested revolutionary progress. Thanks to emergence of more advanced x-ray light sources such as synchrotron radiation, more powerful optical components, people are now able to produce and control x-ray beams in an increasingly refined way, and capture the images and videos of very delicate processes, such as the breathing of tiny insects, and stage shifts of chemical reactions etc. Thus, in the foreseeable future, x-ray microscopies will definitely fathom our understanding of the universe.